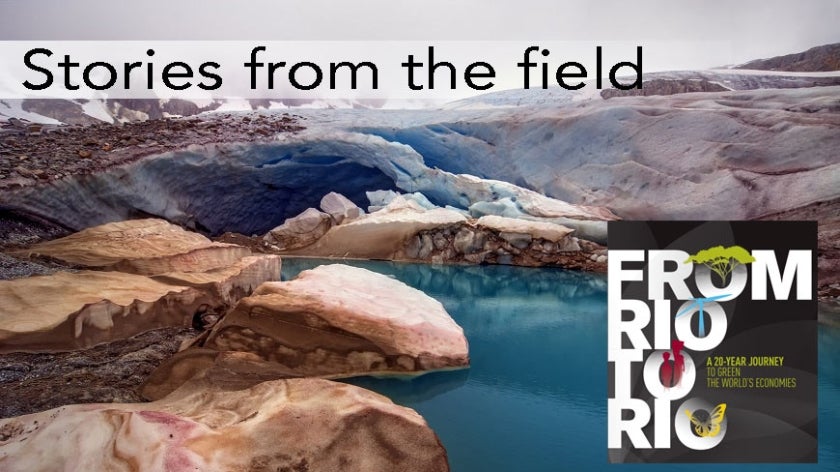 The most famous medical advice in history actually had nothing to do with medicine.

Benjamin Franklin’s well-worn adage that an ounce of prevention is worth a pound of cure referred not to illness but fire. Among his many other pursuits, Franklin was a pioneer of public safety and created Philadelphia’s first fire company in 1736.

Franklin’s insight was so powerful, and applied to so many things, that from it we remember a simple and ageless lesson: it is far better to prevent disaster than attempt to deal with the consequence afterward.

That lesson can be seen in action in countless circumstances, none more compelling than a climate change adaptation project now underway in one of the most remote and rugged places on Earth, a Himalayan glacial lake in Bhutan called Lake Thortormi. The lake lies at an elevation of 4200 meters, on the southern slopes of Gangchen Singye or Table Mountain, near Bhutan’s border with Tibet. Just below the lake runs the Pho Chhu River, which flows into the Puna Tshang Chhu, the country’s longest river, along which there are emerging townships, important historical structures, major hydropower projects, farmland, and public infrastructural projects.

To see Lake Thortormi today, even from space, is like to see a lake being born. The lake sits at the lower edge of Thortomi glacier, held in place by a moraine dam at the southern end made up of rocky debris left behind as the glacier has retreated to the north, higher and higher into the mountains. Formation of glacier ice from the winter snowfall, and some melting of such ice in summer is a normal phenomenon. However, the warming climate of the past decade has significantly increased the rate of glacier melting, causing the glaciers to retreat. While the lake for the moment remains largely a slurry of rocks, sand, and water, meltwater pours into the basin at an ever increasing pace.

That poses an enormous threat for the downstream communities, human and otherwise, in the PunakhaWangdi and Chamkhar Valleys. Particularly worrisome is the unstable moraine dam separating Lake Thortomi from its neighbor to the west, the deeper and more fully formed Lake Rapstreng. Ice cements the moraine together, so as temperatures rise and the ice melts the dam may give in. That would send water from Thortomi Lake cascading into Lake Rapstreng, forming a super lake with more than 53 million cubic meters of water.

A lake that massive would place enormous pressure on the remaining moraines holding it in place. Should they burst, the results would be catastrophic. In 1994, a partial collapse of a moraine of the neighboring Lake Luggye resulted in flood that killed 21 people and swept away livestock, crops, and homes. A flood from Lake Thortomi would be three times that size, and given how fast the water is rising, it could happen at any time.

Scientists have a name for these disasters: Glacial Lake Outburst Floods, or GLOFs. Since Bhutan’s northern territory abounds with glaciers and glacial lakes — by one estimate 677 glaciers and 2,674 glacial lakes — the country faces a great risk for this particularly fierce and unpredictable scourge, like a mountain tsunami. Of all Bhutan’s glacial lakes, 25 pose potentially high risk for GLOFs, with Lake Thortormi one of the most critical of all.

Time is of the essence. The urgency of adapting to climate change is brought home in stark terms — approximately 10 percent of the Bhutanese population lives in the PunakhaWangdi and Chamkhar Valleys, and their very lives are at stake, along with hydropower plants, farms, and important cultural sites.

The Government of Bhutan recognizes the threats but lacks the capacity to address them. Thus, it requested funding from the Least Developed Countries Fund (LDCF), established under the UN Framework Convention on Climate Change (UNFCCC) and managed by the GEF to mobilize additional resources for climate change adaptation projects. With financial support from the LDCF, the Department of Geology and Mines and the Disaster Management Division, in partnership with the United Nations Development Programme (UNDP), developed a project to reduce the risk of GLOFs in the Punakha-Wangdi and Chamkhar Valleys.

The project is among the most concrete, tangible approaches to climate change adaptation anywhere in the world. In a combination of technical sophistication and backbreaking manual labor under the most challenging conditions imaginable, a team of geologists, glaciologists, engineers, and 250 workers — most from local villages but some from more far-flung parts of Bhutan — are lowering the water level in Lake Thortormi.

For three months in late summer, when the weather turns favorable, workers set up a tented village on the valley floor to the south of the lake. Every day, they make the 90 minute hike over the ridge separating their temporary home from the lake, carrying their sledge hammers, pickaxes, shovels, ropes, and burlap bags; given the elevation and the rugged terrain, heavy machinery is not an option. Standing in the bone-chilling water on the glacier, the workers haul boulders and clear mud entirely by hand. Like slowly turning a giant spigot, the workers cut channels to allow a controlled flow of water off the glacier, into the Pho Chuu River and down the valley.

The LDCF funding came just in time. If Lake Thortormi had developed for another year, it might have been too late to do anything about it. As it stands, by dint of shovels and pick axes, the level of the lake has fallen more than two meters, and levels in two subsidiary lakes have fallen by as much or more. The goal of the project is to eventually lower Lake Thortormi’s water level by a full five meters.

The immediate benefits of the project are clear, and twofold. The first and most apparent, the risk of catastrophic flood has been markedly reduced. This is climate adaptation as prevention, literally a hands-on application of Franklin’s adage — rather than compensate individuals and even nations for damages, avoid them altogether and save both lives and money. The project also demonstrates how much can be accomplished with a relatively small investment. While climate adaptation is a global challenge requiring sophisticated science, it will come about at least in part in small steps, with specific tasks tailored to local circumstances, some of them as basic as breaking rocks with hammers.

The Lake Thortormi project also highlights the role local communities can play in climate adaptation, and they are the true heroes of this story. Some of the workers trek for many days and must cross a 5,200 meter pass to reach the lake, one of most remote work sites on the planet. They earn about US$10 a day for the three-month stint, five times the average national wage.

The money the workers earn will make a meaningful difference in their lives. For Shan Dorji Doya, who walked for fourteen days to reach Lake Thortormi, this was an opportunity to start a new life. “With the money I earn from working,” he says, “I plan to open a small store so I can support my family.” The benefits also extend to people beyond those actually clearing the rocks and sand. The project considered using helicopters to bring in the 60 tons of supplies the project needs, but chose instead to employ local horse and yak herders. As a result, local communities earned more than US$150,000, helping them pay for school for their children and expand businesses. The project has thus improved the overall quality of life in the area, providing new investments and new opportunities.

Lowering the water level in Lake Thortormi is just part of a larger effort to reduce the risk of glacial lake outburst floods in Bhutan. With LCDF funding, UNDP is helping the government integrate the risk of climate-change induced floods into the existing disaster risks management framework. A Disaster Risks Management Bill has been drafted and has gone through a comprehensive review and stakeholder analysis and is awaiting approval by the Parliament. Moreover, based on a hazard zoning exercise, a government circular for GLOF-resilient land use planning has been disseminated to local authorities in Punakha, Wangdi, and Bumthang. This has prevented new construction in potentially hazardous sites and a number of planned construction efforts have been put on hold as a result.

Several rounds of awareness and advocacy programs on GLOF risks and the existing, manual early warning system and procedures have been conducted in 21 vulnerable communities along the Pho Chhu River basin. Installation of an automated early warning system has begun, including the construction of 14 siren towers and a control room. The system is targeting more than 90 percent of the households in the vulnerable communities downstream of the Punatsangchu River in the Punakha-Wangdue valley, in addition to a vital hydropower project, schools, health centers, and other important infrastructure.

The Bhutan project provides important lessons about how to reduce climate vulnerability and increase the adaptive capacity to climate change by financing efforts to foster climate-resilient development. The first lesson was how to put in practice the initial concrete actions on the ground, and to use the available knowledge about vulnerability as the basis for proactive, preventive adaptation actions. Since water from Himalayan glaciers is crucial to Bhutan’s economy, the project is helping put adaptation in the context of development, an important step in addressing adaptation issues across entire regions and the globe.

The project also illustrates how to achieve climate-resilience by taking into account national circumstances and economic and social priorities. By increasing disaster risk management capacity in affected valleys (including the integration of climate change risks), lowering the water level in Lake Thortormi, creating early warning systems, and integrating all these measures into existing development plans, the project in Bhutan resulted in a reduced risk of expected significant destruction of economically important areas, and prevention, or at very least limitation, of human and economic losses.

The risks of climate-change induced floods extends far beyond these Bhutanese districts and covers the entire Himalayas. This project marks the first time that a comprehensive approach to the problem has been attempted, and is a pioneering effort on prevention of GLOF related hazards and plans are being made to replicate the efforts in neighboring countries like Nepal to reduce the GLOF related risks throughout the region.

Even more broadly, preventing glacial lakes from bursting can have impacts across all of South Asia. That entire region, home to more than a billion people, depends on the rivers that have their headwaters in the Himalayas. The Pho Chhu River, for example, fed by Lake Thortormi, flows eventually into the Brahmaputra, which is considered the lifeline of India and provides water for irrigation, transport, and hydropower in its basin. Drastic and sudden changes in the hydrological regime would have profound consequences in these countries downstream of the glaciers. Projects like that on Lake Thortormi will not prevent such changes, which if they occur will likely be driven by the global climate, but such efforts may be able to help limit the damage.

The project in Bhutan has been one of the most successful under the LDCF, which set the precedent for funding climate adaptation projects. One of the main accomplishments of the LDCF portfolio has been to test and demonstrate adaptation measures on the ground, as in Bhutan. The LDCF and the Special Climate Change Fund, which also prioritizes adaptation action and is managed by the GEF, provide practical operational knowledge. They offer vulnerable countries and communities, through the GEF network of agencies who implement projects and national and local stakeholders, initial resources to finance this pioneering portfolio. This experience has resulted in a much clearer sense of what climate adaptation means in practice, how to implement it, and how to estimate its costs 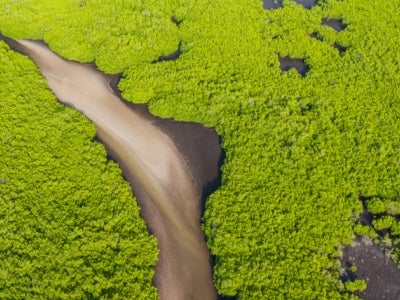 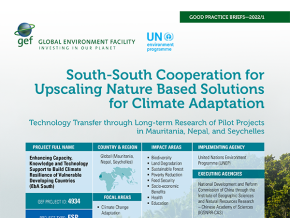