China: Empowering local communities and CSOs to protect the environment 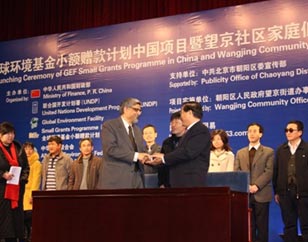 On March 27, 2010, China has officially become one of the country implementing SGP projects.

A ceremony organized by the Ministry of Finance of China, the GEF Small Grants Programme and the United Nations Development Programme (UNDP), has celebrated the kick-off of the first project the ‘Wangjing Community Low Carbon Action’. Implemented by All China Environment Federation (ACEF), the project aims at reducing the monthly electricity consumption by 1 kWh per family during the summer 2010 (from June to August). The project consists in undertaking a community- based greening campaign that will target 10,000 households living in Beijing’s Chaoyang District, the city’s largest and most populated area. The goal is to reduce carbon dioxide emissions up to 50 tones and more importantly to obtain a behavior change of each household. The event was attended by over 300 people including government and UN officials, representatives from civil society organizations and local communities, volunteers, and journalists.

In 2009 China announced its first “call for proposals” for SGP grants, receiving 156 proposals within a 30 day period. The National Steering Committee of SGP China approved 22 projects which encompass all of GEF’s six focal areas. The projects will be implemented in different Chinese provinces through the entire territory of the country and will range from the implementation of innovative community-based biodiversity conservation and sustainable land management practices to productive uses of renewable energy.

“The GEF SGP is operated on the premise that local people will be empowered to protect the environment when they are organized to take actions, have a measure of control over access to the natural resource base, can deploy the necessary information and knowledge, and believe that their social and economic well-being is dependent on sound long-term natural resource management,” said Khalid Malik, UN Resident Coordinator and UNDP Resident Representative in China. Malik noted that by raising public awareness, building partnerships, and promoting policy dialogue, the programme aims at promoting an enabling environment within China for achieving sustainable development while addressing global environmental issues.

With a total budget of US$ 1.15 million from the GEF, SGP China is now one of 122 country programmes of the global SGP which is implemented by UNDP, and as such is implemented in a country-driven manner through a National Steering Committee that is a partnership of the Chinese government, local CSOs/CBOs and other stakeholders. The programme will channel financial and technical support directly to non-governmental organizations (NGOs) as well as community-based organizations (CBOs) for their GEF-related environmental projects.