As easy, almost, as changing a light bulb 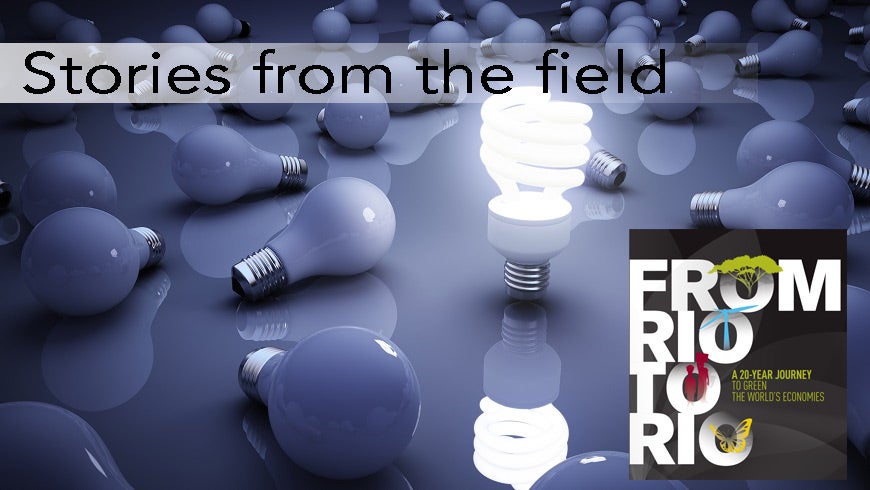 If Poland wanted to provide cheaper energy services, reduce pollution, and defer the need for new energy generation, transmission, and distribution capacity, then getting those domestically-produced CFLs into light fixtures across the country was the place to start.

Say the word “coal” and most people think glossy black, slow-burning rocks, the hard stuff that generations of miners dug out of the Appalachian Mountains in the eastern United States, Shaanxi Province in central China, or Jharkhand in eastern India.

Lignite, while technically a kind of coal, does not fit that image. First of all, it is brown, and crumbly. Lignite burns so fast it just seems to disintegrate. Geologists classify lignite as coal but really it is just peat that never quite hardened. It seems unfinished, like half-fired clay.

Bituminous and anthracite coal, the more familiar kinds, ship well and indeed trade all over the world. Lignite, being soft, does not. When burned, lignite also produces less heat, more carbon dioxide, and four times as much sulphur as its harder cousins. Where deposits of lignite occur, however, the fuel is abundant, close to the surface, and therefore cheap.

Among the largest deposits of lignite in the world occur in Central Europe, particularly Germany, the Czech Republic, and Poland. During the Soviet Era, governments in the region pursued rapid industrialization based on lignite-burning power plants. Dozens of such plants fed cheap power to the refineries and chemical factories. As workers moved in, still more plants were needed to provide heat and power to the growing towns and cities. The result was an environmental catastrophe, an unmatched level of industrial pollution. Pollution so devastated the region where Germany, the Czech Republic and Poland meet that it earned a grim nickname: the Black Triangle.

After decades of blight, by the 1980s the Black Triangle was practically unfit for human habitation. Sulfur dioxide concentrations were double the maximum safe level. Even worse, soot and dust spewing from the power plants turned the sky a dreary gray, forcing children to wear surgical masks on their way to school. Life expectancy fell and infant mortality rose as the pollution got so thick that even stepping outside became dangerous.

Then, in the fall of 1989, the Berlin Wall came down, while at nearly the same moment the Solidarity Movement in Poland and the Velvet Revolution in what was then Czechoslovakia brought down Communists governments. The resulting democratic regimes set about almost immediately to bring the Black Triangle back to life. The task entailed a complex effort involving international agreements, new laws and regulations, clean, modern power plants and sophisticated technologies to scrub emissions from old ones. In Poland, however, one of the most important steps was as easy — almost — as changing a light bulb.

By the early 1990s, once Poland’s economy had recovered from the shock of leaving central planning behind, the government and international donors saw an opportunity. While the country was becoming more efficient in its energy use, it was the twelfth largest emitter of CO2 in the world, despite a population of just 38 million people, well below much larger emitters. Much of the demand for electricity was coming from household lighting, as most everyone in the country used old-fashioned incandescent bulbs. While more efficient, longer lasting compact fluorescent light bulbs (CFLs) were becoming common elsewhere in the world, they were practically unheard of in Poland, and the few that were available cost far too much for most consumers. The industrial giant Phillips opened a plant to manufacture CFLs in Poland, but exported nearly all of them.

If Poland wanted to provide cheaper energy services, reduce pollution, and defer the need for new energy generation, transmission, and distribution capacity, then getting those domestically-produced CFLs into light fixtures across the country was the place to start. A compact fluorescent bulb lasts six to ten times longer than an ordinary incandescent bulb and consumes only a quarter of the electricity. Replacing one 60-watt ordinary bulb with a 15-watt CFL avoids burning around 160-180 kilograms of coal or a barrel of oil at a power plant. This translates to around 300 kilograms of greenhouse gas emissions reductions.

In 1994, the GEF and International Finance Corporation (IFC) began funding efforts to stimulate the Polish market for CFLs. Beyond simply selling a certain number of more efficient light bulbs, the goal was to transform the entire market for them. Only by making sure that consumers would continue to buy CFLs after the project ended would it have a lasting effect.

The idea of using targeted projects to transform markets has become an important tool for the GEF and its implementing agencies. The lessons these organizations have earned in Poland and elsewhere can be applied to other efforts to build a green economy, piece by piece.

At the heart of the GEF/IFC program, called the Poland Efficient Lighting Program, or PELP, were subsidies to reduce the retail prices of CFLs from any manufacturer that was able to meet minimum technical requirements. GEF provided over US$2.6 million in subsidies to five Polish lighting manufacturing companies that competitively bid voluntary wholesale price reductions equal to at least the full value of the subsidies. As a result, CFL prices decreased by 34 percent in real terms from 1995 to 1998, and they have remained low since the project ended. The retail price of a single CFL fell by about US$6, about three times the average subsidy for each one, and consumers bought 1.2 million CFLs through the project.

The percentage of Polish households using CFLs tripled, from 10 percent to 30 percent. New manufacturers entered the Polish market, increasing competition, and the total number of CFLs in use increased to about 1.6 million units in 1996, up from 0.6 million in 1994.

The public education component of the project promoted the CFL subsidy program by providing general consumer information on the benefits of energy-efficient lighting from a trusted, non-industry source. The public came to know the project’s “green leaf’’ logo as a consumer brand connoting energy-efficiency and high quality.

Counting just the efficient bulbs purchased as a direct result of the two-year subsidy, the project produced electricity savings of at least 435 gigawatt-hours and reduced CO2 emission by at least 529,000 tons. But the impact was far larger when its indirect contributions are taken into account, including greater awareness of CFLs, encouragement of new manufacturers, and a lasting reduction in price. Counting all that, the program impact amounted to total electricity savings of at least 2,320 gigawatt-hours and CO2 reductions of 3.62 million tons. All told, CO2 emissions per capita in Poland have fallen by 25 percent since 1989.

The project accelerated the maturation of the Polish CFL market toward saturation within about three years. A higher percentage of households in Poland now use CFLs than do so in the United Kingdom or the United States, and sales increased at more than twice the rate in the rest of Central and Eastern Europe. Polish consumers can now find more different types and wattages of CFLs in more places, including supermarkets, hypermarkets. This is what a transformed market looks like.

Consumers were not the only focus of the project. A pilot component was aimed at demonstrating to Polish electric utilities that they would be better off helping customers use less electricity than watching demand grow and then investing in expensive new power plants and transmission lines. This approach, called demand-side management, was not widely accepted in Poland in the mid-1990s. The pilot project worked in three cities where the electric power grid capacity was inadequate to meet existing electric loads or soon would be. Engineers carried out detailed analyses of the impact that widespread use of CFLs would have on the power grid and demonstrated to the Polish electric utility industry, in real field conditions, the potential benefits of a demand-side program.

The results were clear: in the neighborhoods participating in the pilot, demand for electricity dropped by 15 percent. In some households, peak power usage dropped by 40 percent. Such significant reductions would mean enormous savings for the power companies, and important reductions in greenhouse gas emissions if the companies implemented demand-side management across the country.

Opening the market for CFLs is proving to be largely beneficial in Poland, but intervening in anything so complex can bring unintended consequences. Now that the project has ended, the new CFL market has evolved and cheaper, imported bulbs are flooding into the country. The overall quality of CFLs has declined, posing the risk that consumers will become disenchanted and go back to the old incandescents. At the same time, however, new European regulations are encouraging the sustainable growth and use of CFLs, and more efficient incandescent bulbs as well.

Improving energy efficiency involves more than just lighting. Broader efforts are needed, and here Poland faces other obstacles. Poland for now can generate more electricity than it needs, so the government has less incentive to enforce efficiency measures. The coal industry is also enormously influential in Poland, given that coal provides more than 80 percent of electricity generation in the country and provides many jobs. As a result, government policy has focused less on energy efficiency initiatives, which encourage using less energy and therefore less coal electricity generation, than on creating new jobs in renewable energy industries such as biomass.

Despite such challenges, the GEF/IFC experience in Poland suggests that the purely private-sector approach had a significant impact on the market at a reasonable cost. That important lesson has already reached other countries, and inspired the GEF and the IFC to create the Efficient Lighting Initiative (ELI), a three-year, US$15 million investment to promote efficient lighting in Argentina, the Czech Republic, Hungary, Latvia, Peru, the Philippines, and South Africa.

■ In Peru, annual sales of compact fluorescent bulbs (CFLs) increased twentyfold, from 250,000 to over 5 million;

■ In Argentina, the price of CFLs dropped eightfold due to ELI-inspired promotion and competition between lighting manufacturers;

■ In the Philippines, manufacturers improved the quality of their efficient lighting products to meet ELI specifications;

■ Electric utilities in Argentina, Peru, the Philippines, and South Africa began selling and financing efficient lamps to their customers;

■ Thousands of newly trained lighting professionals in seven countries are able to specify efficient lighting for their clients.

Across seven countries, ELI reduced energy consumption by 2,590 gigawatt-hours, and CO2 emissions by more than 2 million ton between 2000 and 2003. These initial estimates indicate that ELI catalyzed immediate uptake of efficient lighting, even as the program strategy focused on underpinning long term, sustained market growth.

GEF efforts to promote CFLs in Poland and around the world have brought significant economic and environmental benefits by bringing down costs and reducing the need for new energy-generating capacity. While the focus in many of these efforts begins with the economic benefits, by way of getting governments and communities to buy in, the impact on the global environment is real and will be increasingly important as the GEF and its partner agencies explore, new ways to foster green economies from regional and national efforts all the way down to projects involving just a few towns or villages. That ability to work across scales and across all levels of government and civil society, a hallmark of the GEF since its inception, can help transform the green economy from a compelling idea to a tangible reality for millions of people. That approach had one of its truest tests and greatest successes in the campaign to revive one of Europe’s lifelines, the Danube River.