Minsk Region, Belarus
November 20, 2012
Land is one of the major natural resources for sustainable development in Belarus. However, land degradation is a key constraint, which results in significant economic, environmental and social costs to local communities. One of the root causes of severe land degradation in Belarus has been extensive mining and construction in the past, which has left behind exhausted open pits across the country. During Soviet times the pits were used to produce sand and clay, but then their development was halted and the pits were abandoned.
The land was withdrawn from the economy and never properly restored. In time, local communities and organizations adapted the pits for disposal of household and construction waste. These quickly growing illegal dumps have been causing soil erosion and severe pollution of water resources, turning into a source of significant environmental risk. In the Minsk region alone these abandoned pits cover an area as large as 110 hectares.
In order to address land degradation caused by the pits, while simultaneously contributing to the mitigation of climate change, the GEF Small Grants Programme (GEF SGP), implemented by UNDP, supported an initiative of the Public Association "Belarusian movement Otechestvo" in the Minsk region. The project ‘Remediation of sandpits on the territory of Minsk region as a method of restoring degraded lands and contribution to mitigating the negative impacts of climate change’, which commenced in December 2011, aimed to clean up five abandoned pits including subsequent afforestation or creation of grass cover on these degraded lands. 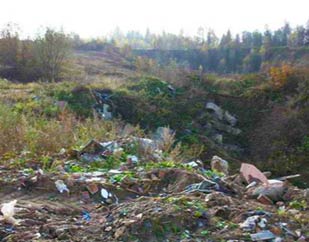 The project has already developed state required design and budget documents to eliminate these pits and reclaim them through planting trees and herbaceous plants. The project has also inventoried and assessed the current status of 32 former mini solid waste landfills and 24 degraded peatlands in the Minsk region. The five most dangerous illegal landfills have already been removed and prepared for reforestation.
The afforestation activities took place during April 21-28, 2012, to coincide with the government’s "Forest Week 2012" campaign and the International Earth Day. In total 115,000 spruce and pine seedlings were planted on about 20 hectares of land. More than 400 volunteers from the local communities as well as school children supported this afforestation initiative. Moreover, officials from the Ministries of Environment and Forestry took part in these forest planting activities. The intermediate results of the project were communicated to the environmental community of the country during the thematic workshop “Solution of the degraded land problems and other environmental issues with the involvement of international funding – Experience and practice of the development and implementation of project initiatives by GEF SGP in belarus”, held in August 2012 within the framework of the National Environmental Forum. 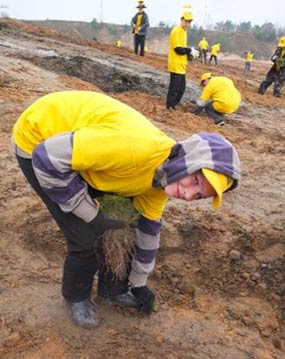 The project serves as a model for developing a system to prevent the use of such sites as landfills and to replicate this experience in other regions of Belarus. Thanks to a well-organized information campaign of the project for awareness raising, the movement to eliminate these waste pits in Belarus is gaining momentum. As a direct result, a number of Minsk district CBOs have offered their support to the "Belarusian movement Otechestvo" in their efforts to restore degraded and polluted lands in their territory. Consequently, the project has been redesigned and the project implementation period has been extended until April 2013. In order to support the objectives of reclaiming 8 more pits, the project will use the saved financial resources of the originally allocated GEF SGP grant of US$ 149,840, the original cash co-financing by the Ministry of Environment and Nature Protection of Belarus of US$ 91,689 and the in-kind contribution of US$ 11,950 by the grantee and the private sector, as well as the additional co-financing of US$ 36,213 that will be provided by the State for this upscaling initiative. The ownership of the newly planted forest will be handed over to the Forest Fund of Belarus at the end of the project.
The project experiences and lessons learned will be shared with other regional centers in Belarus. Through specialized seminars, project participants will explain how to solve environmental problems through the joint efforts of authorities, NGOs and local communities.
Currently, all regions of the country are conducting inventory mapping of all open pits and illegal landfills in the country to develop a special State Program for their rehabilitation.  The successful implementation of this GEF SGP project in the Minsk region, is therefore contributing valuable experience in restoration of these degraded lands to overall national policy formulation and implementation.

Background for editors
About the GEF
The GEF unites 182 countries in partnership with international institutions, civil society organizations (CSOs), and the private sector to address global environmental issues while supporting national sustainable development initiatives. Today the GEF is the largest public funder of projects to improve the global environment. An independently operating financial organization, the GEF provides grants for projects related to biodiversity, climate change, international waters, land degradation, the ozone layer, and persistent organic pollutants.
Since 1991, GEF has achieved a strong track record with developing countries and countries with economies in transition, providing $10 billion in grants and leveraging $47 billion in co-financing for over 2,800 projects in over 168 countries. For more information, visit www.thegef.org.
About the GEF Small Grants Programme
Launched in 1992, GEF SGP supports activities of nongovernmental and community-based organizations in developing countries towards climate change abatement, conservation of biodiversity, protection of international waters, reduction of the impact of persistent organic pollutants and prevention of land degradation while generating sustainable livelihoods.
Since its creation, GEF SGP has provided over 14,500 grants to communities in over 125 developing countries. Funded by the Global Environment Facility (GEF) as a corporate programme, GEF SGP is implemented by the United Nations Development Programme (UNDP) on behalf of the GEF partnership, and is executed by the United Nations Office for Project Services (UNOPS).
Media contacts:
Tamara Tschentscher, KM and Communications Consultant, GEF SGP, tamara.tschentscher@undp.org, 646-781-4353
John Diamond, Senior Communication Officer& Spokesperson, Global Environment Facility, jdiamond@TheGEF.org, (202) 458-7953