The Heart of the South Pacific: Integrated stewardship of the Fanga’uta lagoon in Tonga 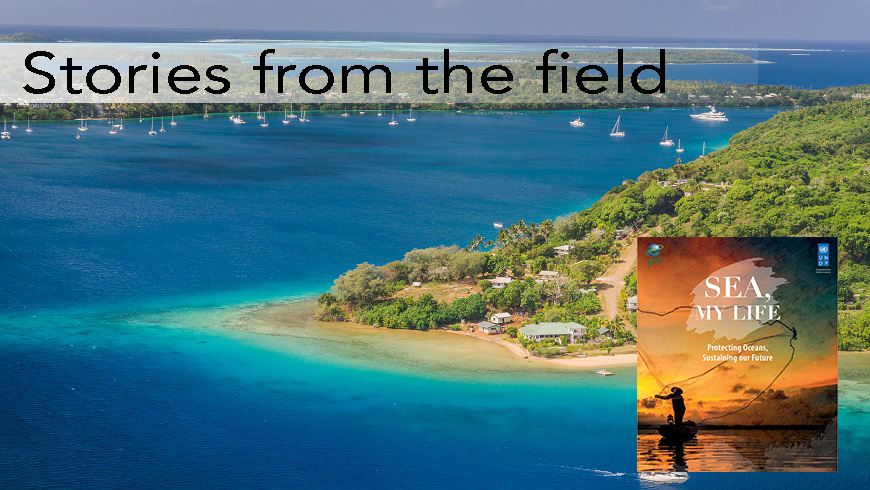 The catchment area of the lagoon is home to more than 40,000 people and includes some of the most important agricultural areas in Tonga, and the last remaining rainforest, Taloa.

Tongatapu is an uplifted coral reef lying on a geologically active zone. The relief of the island is relatively flat, with minor rolling slopes on the southern and eastern coasts. The island is 40 km long, has an area of about 257 km2 and is shaped roughly like a pair of cupped hands ‘cradling’ an extensive double lagoon system – the Fanga’uta and Fanga-kakau lagoons (referred to collectively as the Fanga’uta Lagoon). The catchment area of the lagoon is home to more than 40,000 people and includes some of the most important agricultural areas in Tonga, and the last remaining rainforest, Taloa. The Fanga’uta Lagoon system, with its sheltered waters, mangroves, seagrass beds and patch reefs, is an important nursery area for both fin and shellfish, supporting fisheries both within the lagoon and in the surrounding sea. This means that the welfare of all people who live in the area is directly connected to the health and productivity of the lagoon ecosystem and its catchment. The area is also important culturally as a place of beauty and enjoyment, and it has a rich archaeological history which stands as evidence of Tonga’s proud 3,000 year history of settlement.

The Fanga’uta Lagoon was declared as a marine reserve in 1974. Despite this, the health of the lagoon and its catchment, and the Tongans who depend on it, has been in a state of decline for some years, due to a combination of natural and human-induced environmental changes. These include changes in tidal flows and water circulation; fragmented land-use decision-making; increased competition between competing land-use practices; increased fishing pressure; and unsustainable urban and agricultural practices that cause habitat loss and degradation. In particular, the lagoon ecosystem has become seriously impacted by land-based sources of pollution caused by poorly-managed sewage, run-off of agricultural pesticides and fertilisers, and waste dumped in or near the water. Local communities, and especia

Before the initiation of the ridge-to-reef project, the Government of Tonga undertook a series of studies to establish the causes of the poor ecological state of the Fanga’uta Lagoon, and the results were used to develop an environmental management plan for the lagoon system in 2001. Implementation of this plan did not take place due to budgetary and administrative constraints in government, and other issues such as a weak local capacity for monitoring of key ecological and socio-economic factors, the lack of an inclusive institutional mechanism for co-ordinating stakeholder interests and activities, and low levels of awareness amongst the community.

To help the people of Tongatapu overcome these barriers, the Tonga Ridge-to-Reef project, which started in 2014, has facilitated the development of the Fanga’uta Stewardship Plan, to replace the older Fanga’uta Lagoon Management Plan. As part of the highly participatory process through which the Stewardship Plan was developed, the project has also helped to establish a management and decision-making framework and process involving three committees, through which all stakeholders play a role in implementation of the plan. The Stewardship Plan is a legal document gazetted under the Environment Act, but it does not only focus on environmental conservation – it is an integrated, local area management plan that provides a framework to guide decision-makers in achieving sustainable development of the catchment area, in ways that minimise negative environmental impacts and strengthen resilience.

The Fanga’uta Stewardship Plan serves as the mechanism through which Tonga can improve compliance with existing national laws related to fisheries, waste management, environmental management and impact assessment, spatial planning, and the management of water resources. But, beyond this, it is a consensus-based framework in which all partners recognise their role as guardians and stewards of natural resources in the lagoon and its catchment, and through which they commit to sustainable management of the resources within their care. The plan makes provision for areas that are set aside for protection, sustainable use and rehabilitation, and gives all stakeholders access to information they need for knowledge-based, adaptive management of the ecosystem upon which they depend. Implementation of the plan encompasses a variety of activities to rehabilitate degraded mangrove and other coastal habitats, restore productivity to agricultural land, monitor water quality, manage waste, and stimulate alternative livelihood opportunities with a focus on marine-based eco-tourism.

The participatory process through which the plan was developed has increased awareness, commitment and capacity for community stewardship of the lagoon and the surrounding area. As a result, and following a learning exchange facilitated by the project with communities in Fiji, four communities living within the Fanga’uta Lagoon catchment have committed to the establishment of Special Marine Protected Areas (a type of locally managed marine area, or LMMA) within the Fanga’uta Lagoon Marine Reserve.