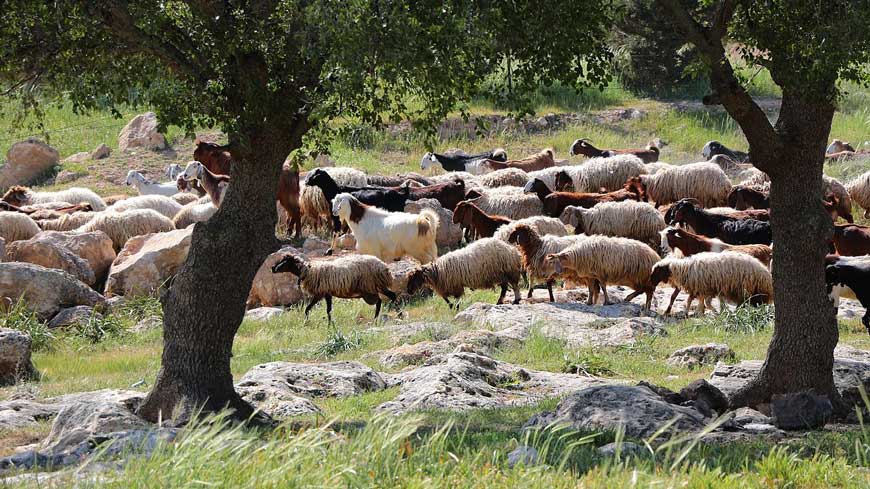 The Jordanian concept of "hima" refers to protection, and can be extended to protection of pastoral rangelands. From 2017-2020, GEF and UN Environment are partnering to advance communal rangeland management and reverse desertification. ©: Adeeb Atwan

Jordan’s 9.1 million people are facing serious environmental challenges. Land degradation due to over-exploitation of vegetation, and unsustainable agriculture and water management practices, have resulted in lack of fodder for livestock and reduced land productivity. This in turn has forced many of the country’s nomadic Bedouin people to abandon pastoralism and move to cities.

In response to such challenges, UN Environment, in partnership with the International Union for the Conservation of Nature (IUCN), is implementing a Global Environment Facility-funded project to strengthen the sustainable management of pastoral rangelands and protect biodiversity.

The 2017-2020 project involves supporting the establishment of the concept of Hima (the Arabic word for “protection”) in Jordan and parts of Egypt. Hima is a traditional form of tenure that has governed rangeland resources in the Arabian Peninsula for over 1,400 years. It has contributed to the sustainable management and conservation of vast areas of rangeland and natural resources.

The project aims to strengthen local associations that implement communal rangeland management, and replicate such practices in parts of both countries.

“The value of Hima is that it’s a known and respected approach that is favoured by both land users and government,” says Jonathan Davies of IUCN.

“It’s a local governance system that enables land users to implement simple changes in herd management that are needed to allow rangeland rehabilitation. Hima is known throughout the Arab world, and similar governance systems are found throughout the world where pastoralists manage communal rangelands. The lessons from Jordan are globally relevant and could open the door to restoring millions of hectares of degraded rangelands worldwide.”

The new UN Environment/IUCN project strategy was developed based on a Hima pilot project in the Bani Hashem community in central Jordan, where 1,500 hectares of public land were identified for rehabilitation. After one year of activities, indigenous floral species returned; shrubs and grasses are regenerating; and 36 native plant species have been recorded.

In 2013 and 2014, Jordan updated its Rangeland Strategy to enshrine Hima into law, helping to achieve Sustainable Development Goal 15, Target 3, to stop desertification and restore degraded land and soil.

Jordan’s Hima policies have won recognition in the form of a Future Policy Award from the World Future Council.

“Jordan’s win of the Bronze Future Policy Award is sending a strong, empowering message: they show how a country vulnerable to desertification and climate change can find a smart and highly effective way to successfully address a global challenge,” says Alexandra Wandel, Director of the World Future Council.

“UN Environment is also working with the Jordanian government on a complementary project proposal to be submitted to the Green Climate Fund focusing on strengthening the Hima concept as the best rangeland management adaptation response to climate change,” says UN Environment landscape management expert Abdelkader Bensada.

More than 1.3 billion people are trapped on degraded agricultural land, drastically increasing competition for crucial ecosystem services such as food, water and energy.

This startling fact comes from a report launched at a meeting of the UN Convention to Combat Desertification (UNCCD) in Ordos, China, in mid-September. The Global Land Outlook demonstrates the central importance of land quality to human well-being.

“Consumption of the earth's natural reserves has doubled in the last 30 years, with a third of the planet's land now severely degraded,” says the report. “Each year, we lose 15 billion trees and 24 billion tonnes of fertile soil. Smallholder farmers, women and indigenous communities are the most vulnerable, given their reliance on land-based resources, compounded by their exclusion from wider infrastructure and economic development.”

The Ordos meeting also saw the launch of The Land Degradation Neutrality Fund – another milestone. With an initial target size of $300 million, the Fund is a first-of-its-kind investment vehicle designed to promote sustainable land management and landscape restoration.

This story was orginally published by UN Environment.