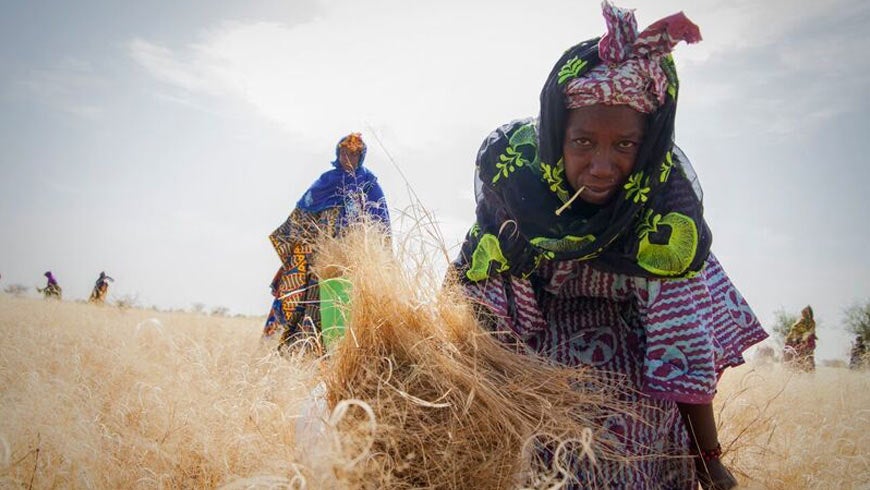 60 per cent of the project investments – from soil restoration to surface water mobilisation, livestock productivity and natural resources management - are related to water for irrigation and for human consumption.

As the GEF's Gender Policy is approved by the GEF Council, the IFAD/GEF co-financed project Poverty Reduction Project in Aftout South and Karakoro – Phase II (PASK II) in Mauritania wins the 2017 IFAD gender award. PASK II addresses a major challenge in the country, the one related to water.

Mauritania experienced a dramatic reduction in rainfall in the last century, going from an average 1,100 mm/year in the early 1900s to the current 400 mm/year. In addition, most rainfall is concentrated during the rainy season, where isolated storms are more frequent, discharging large amounts of water over short periods of time, causing erosion and flooding. The water run-off does not recharge the water table and at the same time destroys the soil and causes damage to top soil.

Because of these periodic floods the villages cannot be located close to the riverbed, and women have to walk long distances to fetch water. In addition, male migration to find alternative sources of income is increasing and women have many more additional tasks to take care of.

Women and young people now make up more than 50 per cent of project participants and are benefitting from the project’s multi-dimensional approach to reducing poverty.

The GEF co-financing is specifically targeted to water for agriculture, with 40 women-managed market gardening areas developed, as well as productive micro-projects benefitting women.
Improvement in access to water have made a huge difference to the daily lives of women and girls, saving them an average of five hours per day and freeing their time and energy for education, money making activities and participation in the community.

Gas stove shops, harvesting non-timber forest products and rearing small livestock are a few of the activities enabling women and youth to earn an income. A total of 88 income-generating micro projects are benefitting over 1,500 women and 100 young people.

In order to achieve these results, the project has also invested in a wide range of cross-cutting educational activities including literacy and numeracy training for women producers’ associations, coupled with awareness campaigns on gender equality.

In the words of Ahmed Ould Amar, project coordinator ‘there is no such thing as men’s resistance, it is just a matter of lack of awareness’.

Experiences like this one in Mauritania, or the one of the IFAD/GEF Agricultural Value Chains Support Project – Extension (PAFA) in Senegal (that won the IFAD gender award last year) have fed into the GEF gender policy development process, that has been highly participatory by calling for the contribution and the concrete field experiences of all the GEF agencies.

Now that the GEF Gender Policy has been approved, we expect to see gender and environmental challenges increasingly recognised as interrelated and addressed consistently.

This story was originally published by IFAD