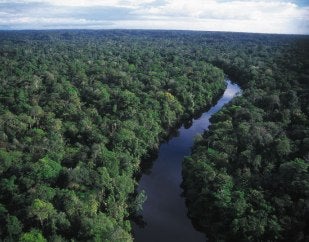 A new study in the Proceedings of the National Academy of Sciences (PNAS) reveals that GEF investments in the Protected Area (PA) network of the Brazilian Amazon have contributed to the recent, steep 75 percent decline in deforestation rates measured from 2004-2009, while at the same time protecting areas of high value for biodiversity.

The study also assesses the direct and indirect contributions of PAs to possible future reductions in deforestation in the Brazilian Amazon by 2050, which hold a total potential to avoid 8 Gt of carbon emissions. The simulations predict that the PA network established with GEF support between 2003-2008 could potentially avoid 27.2 million ha of deforestation and 3.3 Gt of carbon emissions by 2050. The ongoing efforts to expand the network by an additional 12.7 million ha could avoid a further 1.4 Gt in carbon emission by 2050.

The study estimates that the opportunity costs for Brazil to realize this reduction potential of the PA network and to effectively protect the biodiversity sheltered in the Brazilian Amazon amount to US$ 147 billion, which translates into US$ 5.4 per ton carbon. These costs should be partially compensated by an international climate accord that includes a REDD+ mechanism to provide economic incentives for tropical countries that reduce their carbon emissions from deforestation and forest degradation. (www.pnas.org/cgi/doi/10.1073/pnas.0913048107)