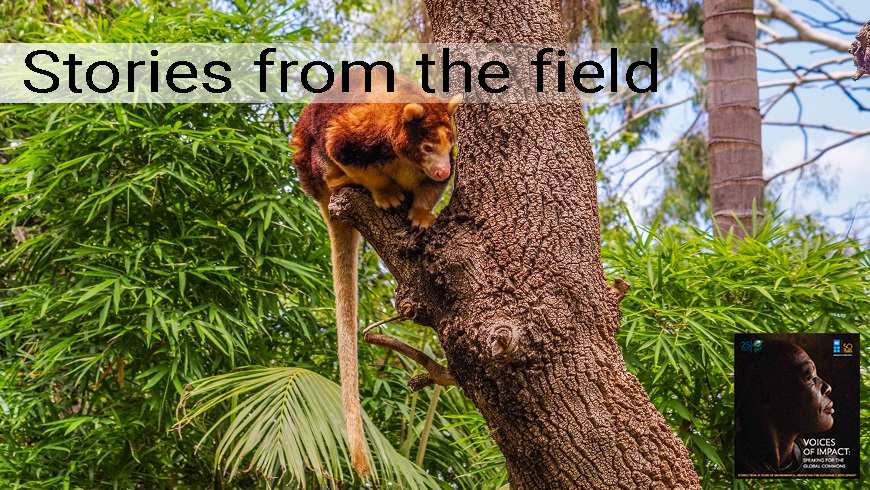 " I learnt that this project had been started to protect the cloud forest home of the tree kangaroo, and that doing this meant that the whole landscape, from the high mountain peaks to the sea, had to be conserved. "

“We are a coastal community and have always relied on the sea for food and income – we catch fish, and harvest sea cucumbers and trochus shells. When I was a young boy I can remember that there were plenty of sea cucumbers and we would always come home with a big catch of fish. But, as time passed, our community was taking too much, without thought for the future. The reefs were being damaged and we had to search further and further from the shore to find any fish.

A few years ago, the Tree Kangaroo project started working in the coastal areas around my village of Singorokai. I was interested, so I joined their community meetings and workshops to learn more about it. I learnt that this project had been started to protect the cloud forest home of the tree kangaroo, and that doing this meant that the whole landscape, from the high mountain peaks to the sea, had to be conserved. Also, the project was concerned not only about the tree kangaroo, but also other species like turtles and dugongs. An important way of protecting them, they said, was for communities like ours to be involved in conservation work and for us to find ways of making a living that do not harm the forests and reefs. This really inspired me – so we formed a community forum called the YUS Conservation Organisation through which we could be involved in activities to protect the marine species and habitats that we depend on. I was chosen to represent our village in the Organization.

Through our involvement in this work we gained a much better understanding of our marine ecosystems and what we can do to look after them. Marine scientists from the project trained volunteers from the village to patrol the reefs and coastal areas so that we can keep a watch on the situation and respond to problems that come up. We look for the species that we use or sell, the rare and endangered species that need protection, and we check on habitats like the seagrass beds and corals.

The people of Singorokai now see great value in protecting our environment and using our resources in a sustainable way. We have even set aside some of the reefs for conservation, to create a safe space for fish to breed – this balances out what we harvest in other areas. But people are still concerned about meeting the needs of their families. Our villages are very isolated, and the nearest towns are hours away by boat. If we limit the harvest of fish and sea cucumbers, what other options do we have to support ourselves?

We knew about the Conservation Coffee programme that the Tree Kangaroo project started with farmers in the inland villages of YUS. Since that project started, people are earning higher incomes to support their families’ education and health needs. So our community suggested that we should start a similar activity here using cocoa – we already had the cocoa trees and basic processing facilities, but we needed the right knowledge and skills. Also, there was no major market for selling our product. The project put farmers like me in contact with the local extension officer to improve our cultivation and processing methods – this increased both the amount and quality of the cocoa we could produce.

We hope that the quality of our cocoa will improve so that we can sell it to international buyers, and earn the above-market prices that the inland coffee farmers have realized. Our cocoa farmers are now forming a cooperative through which we share tools and labour. We can also work together to solve problems, manage our lands and connect with buyers. This is exciting as we can look forward to having much more financial security and providing better for our families.

I am proud of the commitment my community has made to caring for the environment and threatened species. People no longer hunt leatherback turtles or harvest corals and fish carelessly from the reefs. And we have stopped using damaging fishing methods like poison ivy. People’s opinions are changing – in the schools and churches I hear people having discussions about conservation and our responsibility to protect the environment for future generations to enjoy. I am a volunteer marine monitor and occasionally go out to observe the reefs. I see exciting signs of recovery – the corals look healthier, and fish are returning to areas where once they were nearly gone. Leatherback turtles nest and hatch freely on the beaches and dugongs are often seen in nearby seagrass beds. We are able to rely again on harvests from the sea to support ourselves, and I am really hopeful and excited for the new opportunity we have for cocoa farming.

Our clans have lived here for generations – we are a part of the landscape. I think that what we are doing here shows that we can play an important role in conservation.”

NOMIS SIMON is a local landowner, cocoa farmer and former Peace Officer with the Wasu Local Level Government on the Huon Peninsula in the north of Papua New Guinea. He is a community champion for conservation, advocating for sustainable resource management, and serves as Vice President of the Yopno-Uruwa-Som (YUS) Conservation Organization – a community-based landowner association which advises on conservation and development efforts throughout the YUS landscape.

The Tree Kangaroo Conservation Program was launched in Papua New Guinea in 1996, primarily to conduct research on the endemic and endangered Matschie’s tree kangaroo, a conservation flagship species. Under Papua New Guinea’s customary land tenure system, local people own and control over 90 percent of the land – this means that long-term habitat protection relies on the commitment and participation of the local communities who depend on these ecosystems and their products for their livelihoods. Together with local landowners, the Government of Papua New Guinea and many other partners, helped to establish the country’s first nationally-protected Conservation Area in the Yopno, Uruwa, and Som (YUS) watershed areas on the Huon Peninsula. This was the first and still is the only protected area of its type in Papua New Guinea – it is wholly owned by local clans. To ensure the effectiveness of the conservation area, the Tree Kangaroo Conservation Program partners with and builds the capacity of the YUS Conservation Organization – of which Nomis Simon is the Vice President – and a team of Community Rangers who patrol the area on a monthly basis. It also collaborates with communities to address local needs including sustainable resource management, livelihoods, education, and access to health information and services.

Since the creation of the YUS Conservation Area in 2009, the Tree Kangaroo Conservation Program has expanded from its mountainous roots to embrace a broad landscape approach, including marine and coastal reef ecosystems and associated coastal agricultural areas and settlements belonging to more than 50 villages within the YUS area. It has also shifted from a single-species focus to include a wide range of endemic and threatened species such as leatherback turtles, dugongs and long-beaked echidnas. Involving coastal communities in conservation action, whilst providing sustainable economic opportunities, has been a critical step in ensuring the long-term sustainability of the YUS Conservation Area.

Commencing in 2013, the UNDP has supported various components of this work (financed through the GEF Small Grants Programme), including local capacity-building for community-based conservation of threatened marine species, enhancing sustainable livelihoods through responsible agro-forestry, undertaking reforestation activities, and conducting community-led awareness campaigns. Under a new GEF-funded project that started in 2015, the National Government of Papua New Guinea has selected the Tree Kangaroo Conservation Program and the YUS Conservation Area to serve as a model for community-based conservation providing ridgeto-reef protection for habitats and species in Papua New Guinea.