Standing firm against rising tides: Liberia scales up efforts to protect its coastline from rising seas 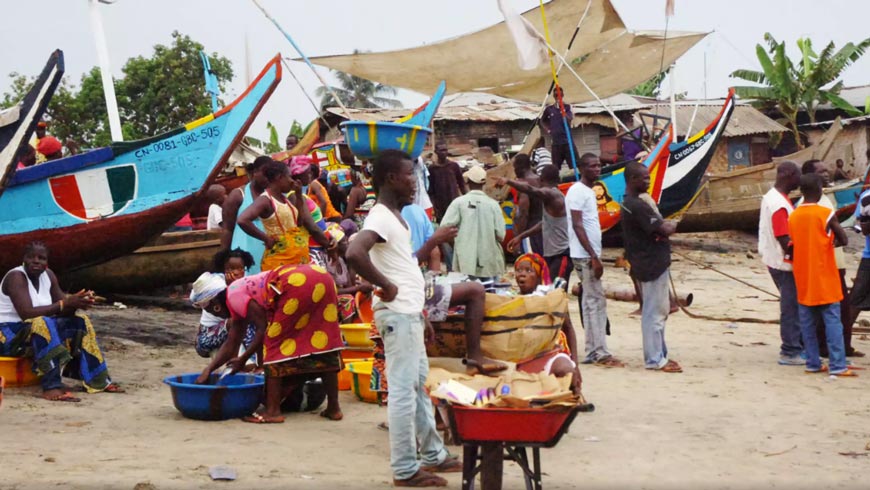 In Liberia's coastal city of Buchanan where over 200,000 people reside, the dark tides of rising seas are literally washing livelihoods away, fishing being chief among them.

The sea is rising around the world posing serious danger to coastal communities. In Liberia’s low-lying coastal settlements, a large number of people live in ramshackle dwellings of cardboard and zinc that are ill-equipped to weather any storm.

Coastal erosion from rising sea levels, exacerbated by widespread (though illegal) sand mining, has already made various parts of Liberia’s coast disappear. The erosion has been so severe that it has washed away a police station and homes, and displaced thousands of people.

In the coastal city of Buchanan in Grand Bassa County where over 200,000 people reside, the dark tides of rising seas are literally washing livelihoods away, fishing being chief among them.

Atlantic Street used to be one of the busiest streets in the area linking the city to different fishing communities - Korkorwien, Fanti Town and Barlawleh among others. It was an economic hub for the area, and according to residents, rising sea levels have destroyed the once beautiful shores and beaches along the street. Vehicles barely ply the street due to the threat posed by the sea erosion.

In 2008, over 20 houses along the seashore were swallowed by the surging waves, while businesses along the area were shut, with many residents and business owners fleeing, and those remaining, living in fear.

A THREAD OF HOPE

In 2010, the United Nations Development Programme (UNDP) and the Government of Liberia launched the Enhancing Resilience of Vulnerable Coastal Areas to Climate Change Risks in Liberia (Coastal Defense Project for short) with funding from the Global Environment Facility Least Developed Countries Fund (GEF). The project aimed to reduce vulnerability and build resilience of local communities and socio-economic sectors to withstand the threats of climate change in Liberia’s coastal areas.

The project focused on Grand Bassa, a community particularly affected by climate change – demonstrating how low-cost, simple technology and sustainable measures can be adapted to address the effects of climate change to the Liberian context.

Challenges like sea level rise require multi-layered solutions. Through the Coastal Defense Project, the Government of Liberia supported the creation of a large breakwater revetment system to mitigate the effects of climate change in Buchanan. The new 600-metre breakwater has reduced the vulnerability of the thousands of families that live seaside. 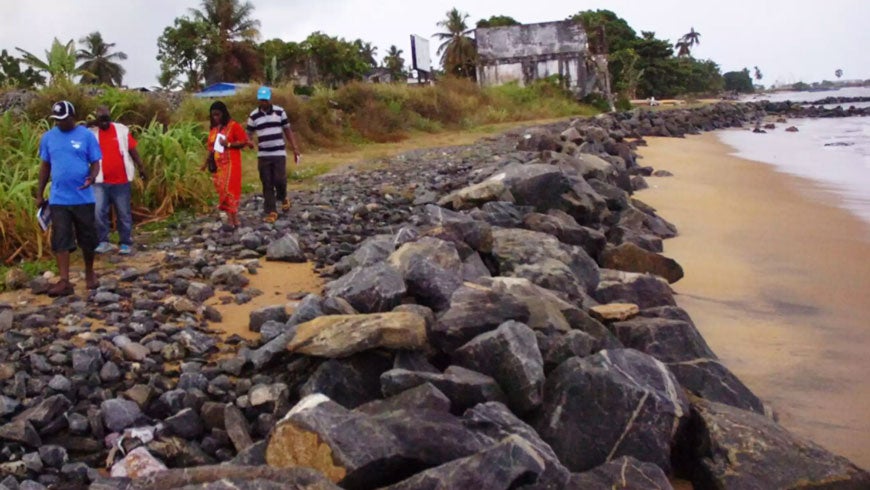 Atlantic Street is gradually regaining its reputation for being a bustling economic avenue for the people of Buchanan and surrounding areas. Residents have a renewed confidence in this enhanced protection and have begun rebuilding their homes and reopening shuttered businesses.

Sam Baiden leases a property in the area and has opened an entertainment center called Ocean Facebook Entertainment Center. He says his confidence was restored after the breakwater revetment system was constructed.

“Searching for a place was not easy, everybody was scared to live or open business along the Atlantic Street and other places near the sea because of the force of the sea,” he said. “Houses were being swallowed and wiped away by the sea daily.”

As a beneficiary of the Coastal Project, Baiden thanked UNDP and partners for giving him a chance at economic prosperity as well as a safer place to live. His Ocean Facebook Entertainment Center is one of the leading social hotspots in the area attracting people from up and down the coast, and Buchanan City as well. Baiden says he generates $15,000 to 20,000 Liberian dollars (US$120-$160) daily.

“Had it not been for the construction of the 600-meter breakwater revetment system, I wouldn’t have ventured into such business,” he said.

James Toe is zonal head of the Korkorwien community, comprising five fishing communities that dot the seashore along Atlantic Street. Toe said the project has rebuilt the confidence of residents who live along the coastline.

“The area we are standing would have been wiped away had it not been for this project,” Toe said.

He noted, however, that there’s still a lot more that needs to be done to save other communities, which are under threat.

“The pressure has increased in other affected communities because the water is no longer finding its way on this side (Atlantic Street),” he said.

There’s no easy answer to build peace in the face of a changing climate – especially in a country like Liberia where over half the population live on less than two dollars a day, and 18 percent live in extreme poverty.

The Enhancing Resilience of Vulnerable Coastal Areas to Climate Change Risks in Liberia project closed this year (2017), but its impact in Grand Bassa and beyond will be felt for years to come. In 2018 with funding from GEF, UNDP and the Government of Liberia will replicate this project in Monsterrado, another coastal community at risk from sea level rise.