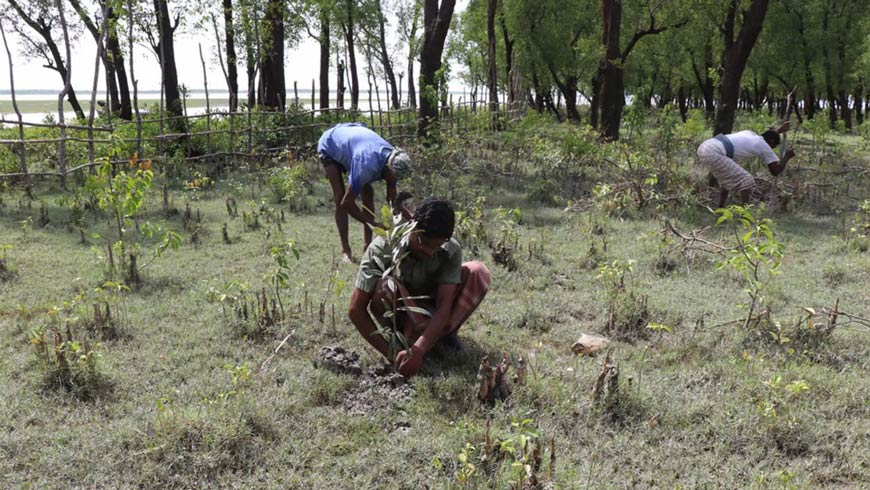 With support from the GEF-Least Developed Countries Fund and in partnership with Bangladesh's Forest Department, UNDP has been working with communities on a unique programme expanding a greenbelt of mangroves.

"I live on a small island. When storms hit, they damage houses and land and pour saline water into the paddy fields and crops. Already I’ve shifted my home once due to river erosion and it is further in danger because the mighty river Meghna is only one kilometer away." Adition Chandra Das, Rahmanpur, South Sakuchia, Monpura, Bhola

Last May, Cyclone Mora affected over 3 million people, killing at least six, damaging or destroying 52,000 homes, and leaving hundreds of thousands in need of shelter.

Of the world’s seven tropical cyclone basins, the Bay of Bengal is perhaps the most dangerous, its funnel shape and shallow waters fostering some of the most destructive storms in history.

In a bid to increase natural protection for vulnerable residents, the UN Development Programme (UNDP), together with Bangladesh’s Forest Department, has been working with communities on a unique programme expanding a greenbelt of mangroves and promoting more-resilient, multi-species forests.

After two years, the programme, with support from the GEF-Least Developed Countries Fund, is making strong headway, embracing both participative design and community-based management in its implementation.

With guidance from the Bangladesh Forest Research Institute, over 176,000 mangroves seedlings from 10 robust, saline-tolerant species have been planted and raised in 10 different forest ranges. An estimated 35,000 people in 62 villages are expected to benefit directly or indirectly.

Over 200 hectares along the vulnerable Barguna, Patuakhali, Bhola and Noakhali coastline have been covered with mangroves, in-line with adaptation priorities set out under the country’s National Adaptation Programme of Action, Climate Change Strategy and Action Plan, and Seventh Five-Year Plan (2016-2020),

Around 40 forest resource protection groups are under formation. Eight co-management committees are involved directly in the establishment of the greenbelt.

"We live near the Bay of Bengal, therefore we have to contend with cyclones like Sidr, Aila, Nargis and Mahasen. The mangroves save us from such devastating disasters. At the same time, they act as a nursing and feeding ground for fish, absorb carbon, and protect land from erosion, increasing biodiversity - the value of which cannot be converted into cash." Ismail Hosen, Panpottry, Galachipa, Patuakhali

Looking to the past, for the future

The use of mangroves to help protect coastal areas is not new – in fact, Bangladesh is a pioneer in coastal afforestation and since the 1960's, the national Forest Department has planted over 200,000 hectares of mangroves along the coast.

However, two stumbling blocks affected the initiative’s effectiveness: a lack of species diversification and inadequate community engagement in the management of forests.

In the past, generally, only two mangrove species, Keora (Sonneratia apetala) and Baen (Excoecaria agallocha) were planted. After around 20-25 years these species naturally die, leaving gaps in the greenbelt and nearby households vulnerable.

The initiative also stumbled due to limited livelihood options for communities; limited local participation in greenbelt management; insufficient incentives for communities to ensure their long-term maintenance; and inadequate inter-sectoral coordination.

To make the coastal belt more protective and climate-resilient, the ICBA-AR Programme has learned from the lessons of the past and enriched the plantation with a diversity of other species.

As incentive to the community to act as local custodians of the forest, the programme is offering climate-resilient livelihoods linked to management of the greenbelt.

To improve local people’s benefit from and ownership of the mangrove forests, the programme has invested in strengthening awareness and actively involving communities and other stakeholders (including local government representatives, local leaders, NGOs, women, and youth) in forest management and adaptation activities.

A total of 650 hectares will be reforested under the programme, due to be completed by 2019.

"Forests consume carbon-dioxide from the atmosphere and act as a shield that prevent us from cyclones and tidal surges. I’m happy to see 15 hectares of mangroves reforested at Patharghata. For our safety, we are determined to protect this forest." Rawshan Ara, Patharghata, Barguna, near the Bay of Bengal

UNDP initiated ‘Integrating Community-based Adaptation into Afforestation and Reforestation Programmes (ICBA-AR)’ in 2016 to help Bangladesh realise the full adaptive potential of coastal greenbelts. The goal of the project is to create a protective and stable greenbelt, increasing species diversity in coastal forests for enhanced socio-economics benefits to local communities.  The project remains underway. Please click here for more information.

Finally, learn more about how Bangladesh is formulating a National Adaptation Plan with a focus on long-term adaptation investment and enhancing national capacity for integration of climate change adaptation in planning, budgeting and financial tracking processes in this country brief.

Footnotes: This article is an adaptation of a story originally published by UNDP Bangladesh on July 30, 2018. Edited by Kate Jean Smith, Communications Specialist, UNDP Asia and the Pacific