An inland sea, the Mediterranean with calm summers and semi tropical climate was the cradle of modern civilizations.

Over thousands of years, human pressure on marine resources and habitats imprinted environmental changes and impacts. Yet it is an important ecological spot for the unique biodiversity inhabits its waters. Though it covers only one percent of the world’s ocean area, the high number of endemic species and critical areas for the reproduction of pelagic species classified the Mediterranean Sea as Global 200 Eco-region, list of priorities for conservation. It inhabits major part of marine species listed in Red Data Book - list of threatened species in the world - prepared by International Union for Conservation Nature, IUCN.

Marine Protected Area (MPA)s are important tool for protection of the sensitive marine areas and threatened species. In addition, they help on ecosystem restoration creating safe heaven areas for fish and invertebrate life; and contribute increase in fish biomass within the border of the designated area gradually which spills over and feed the nearby fishing grounds. MPAs in the Mediterranean cover only 4% of the Mediterranean. No Take Fishing Zones (NTFZ), which is crucially important for the conservation of biodiversity, is only 202 km², 0.01% of the total surface of the Mediterranean. 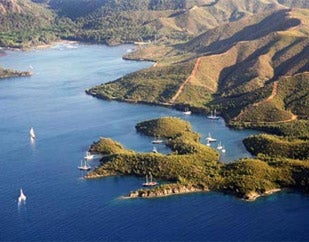 In Turkey, overfishing and over capacity of fishing fleets as in other parts of Mediterranean are serious issues both economical and biological resource management. There aren’t any NTFZ in Turkey where existing MPAs have no active management and enforcement. For these reasons the Underwater Research Society (SAD) initiated a project under the support of GEF Small Grants Programme (SGP), on establishment of NTFZ MPAs in Gökova Bay Turkey in 2009.

The bay itself is already a Specially Protected Area for the protection of beautiful scenic coastline and hinterland. Establishing NTFZs will benefit marine habitats where valuable fish stocks already collapsed and invasive Lesepsian fish have serious impact grazing on algae cover in the littoral zones. One of the reasons behind their population increase of invasive fish species is lack of predator fishes.

Local small scale fishermen who will benefit the NTFZs at first hand are the most important users to convince and getting their support was crucial. One to one awareness and group briefings were held with the local fishermen to explain the positive and long term benefits of NFTZs. Three fishing cooperatives Akyaka, Akçapınar and Akbük-Sarnıç leaders were informed several times and their support were asked.

In very first stakeholder meetings, the fishing cooperatives expressed their negative feeling about any further restriction of their fishing grounds and don’t want to support NTFZs. Later, after project details were told and how the NTFZs management will work, they all accepted with unanimity. Fishing cooperatives decided to have meeting committees to designate the fishing grounds they may sacrifice for NFZs and a further meeting with SAD project team were decided to define NTFZs areas. In 6th December 2009, the final meeting was held in Akyaka-Gökova with participation of Akyaka, Akçapınar, Akbük-Sarnıç fishing cooperatives leaders, well respected, experienced independent fishermen, academicians and SAD project team members. Aim of the meeting was to clearly define NTFZ areas and discuss the opinions on managing these areas. The project team had revised all the previous scientific research about the biodiversity and habitat parameters of Gökova Bay and within the light of this information, considering important breeding, nursery and sensitive areas, SAD suggested six NTFZ areas for Gökova Bay which were accepted in unanimity.

The next step was the final meeting in Ankara with the participation of all related government institutions, fishing cooperative representatives and academicians. At the end, all the suggested NTFZ areas in Gökova Bay were accepted and the designation was officially announced in Turkish Official Gazette, No: 27637, dated 10th of July, 2010.

There are 6 areas of NFZ totally 24 km² declared by Ministry of Agriculture and Rural Affairs which is the main government authority on the subject. Ministry of Environment and Forestry, Coast Guarding and Ministry of Agriculture and Rural Affairs are responsible governmental institutions on implementation and monitoring of the sites. This is the very first step in Turkey on ecosystem based marine conservation and though the total area of NTFZ is small, considering the entire Mediterranean NTFZ, it adds another %10 percent.

The monitoring activities in the area would be key issue for the success. Financial sustainability of the monitoring activities is another important goal to be achieved. Environmental Protection Agency for Specially Protected Areas (EPASA) could use its authority and resources to create financial support for management tools. Research and related monitoring activities are also very important after NTFZ areas declared. Commercial fish species and size sampling at the beginning and at periodic times after the conservation starts will show if the NTFZ efforts help increase in population and size of the important commercial species which are backbone of fisheries in the area. Moreover, invasive species and algae habitat surveys will demonstrate whether NTFZ Marine Protected Areas help to restore algae ecosystems heavily grazed by invasive herbivore species by bringing the predator fish species back to ecosystem.