Welcome to my forest: Working to save tigers from extinction 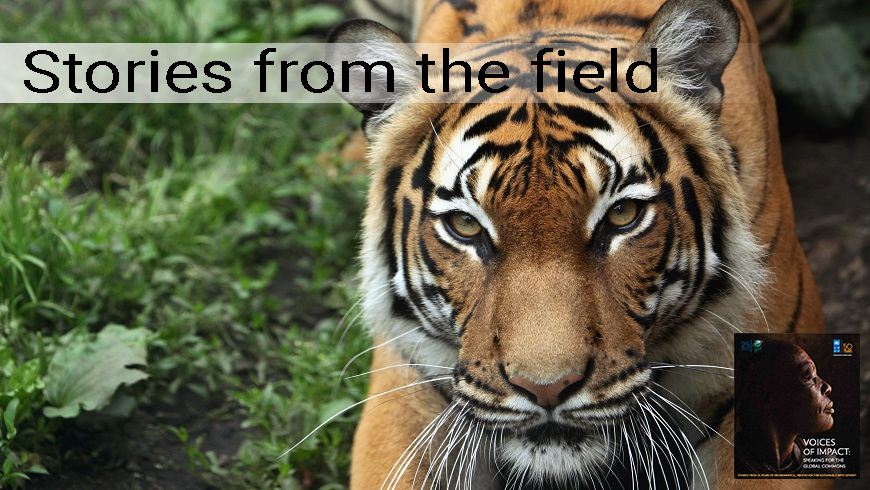 "I am living in what they call the Anthropecene, the age of humans – and my future is in the balance."

”In the rainforest where I live, there has been little to celebrate in recent years. My home has grown smaller, my horizons likewise. My larder has grown emptier, and my neighbours more scarce. The noise of new things has smothered the birdsong, and I wonder if more change is coming? I am living in what they call the Anthropecene, the age of humans – and my future is in the balance.

Like every living thing, I need food. I prefer Sambar deer, but I have not seen one for months. Wild boar are dangerous to hunt, but must suffice – although they too have become fewer. A shiver runs down my spine when I see the near-emptiness of my surroundings. Sometimes, I leave the shelter of my home to find food where people keep animals in large numbers. What else can I do?

Humans call me the ‘king of the jungle’, but, they shoot and trap my kin, sell their skins for decoration, and use their body parts for medicine. I am a king in danger – my throne is coveted, my kingdom is threatened. Others who lived here in the time of my forebears have already disappeared – the Sumatran rhinoceros has gone from this peninsula, and the Javan rhinoceros was hunted to extinction when this land was ruled by people from a far-off kingdom. Much of our forest home has been chopped down.

As I think of those who disappeared before, the fate of my own kind comes to my mind. This morning, I roamed the forest for some time and did not encounter one other tiger, although I did see some pawprints – the first I have seen in a long time. Will I get to meet my kin again? My wise grandmother told me that only four decades back, there were three thousand of us roaming this peninsula. Now, only three hundred are left. If the forces that are destroying our home and killing us are not brought under control, there will be none of us left.

The Malaysian people’s lives have blended with ours for centuries – they have even given me my name – Pak Belang – out of respect. Surely they will not let us fade from this land? None of our cousins can replace us. We have no other home – if we cannot survive here, then an entire branch of the tiger family tree will be lost. And with it will go many others that depend on our presence for their own survival. And if our home is changed so much that we cannot survive here, then the food, and timber and fibres that people need from it will also grow scarce. The water that flows from this earth will dry up, and the soil that once was held by the roots of the forest trees will be blown and washed away. This is all connected.

The forest spirits have urged me to be hopeful. They speak of a brighter future for our clan – of people from the surrounding villages who come here to patrol the forest, with special clothes and equipment. These are forest guards who are well trained and have a plan – they watch and wait for people who come here to hunt us or destroy our home. Those that are caught are made to pay high sums of money and are imprisoned. Now, when I see these guards I have peace of mind, knowing they are here to care for this forest and its inhabitants.

People who study the forest are coming more often now too, and they have many new words on their lips: ‘connectivity’, ‘corridors’ and ‘landscape approach.’ I overhead a learned man explaining that these words mean that the people of Malaysia are trying to reconnect our fragmented forest areas so that we can regain the vast home we used to have – we call it the Central Forest Spine. They understand that this forest is not only here for us, but for all the people of Peninsular Malaysia and even in Singapore, across the sea – even there, the people are using water that flows from our forested lands.

These activities give me hope that I will start noticing new trees growing where once the forest was chopped down. Perhaps soon I will be able to roam far enough to find deer, and meet others of my own kind. I have renewed hope that the clan of Pak Belang will roam this land forever.”

PAK BELANG  (also known as ‘harimau’, or Pantheri tigris, subsp. jacksonii), is a Malayan tiger. Pak Belang is an apex predator and keystone species living only in closed-canopy rainforests in the southern and central parts of the Malay Peninsula. One of six surviving subspecies of tiger, Pak Belang is classified as critically endangered by the International Union for the Conservation of Nature.

Tigers and their habitat face complex and interlinked threats, due to increased exploitation of natural resources and increasing poaching and hunting. These threats have been driven, in part, by a growing human population and increased poverty, particularly over the last century. Loss or fragmentation of intact tiger habitat has led to a decline in food and reproductive opportunities for tigers, as well as increased conflict with humans. This has resulted in the decimation of tiger populations – across Asia, numbers have decreased from an estimated 100,000 in 1900 to approximately 3,200 – 3,800 wild individuals remaining today. During the same time-frame three sub-species have already been driven to extinction, with the Malaysian sub-species under increasing risk.

Since 2010, the GEF has initiated 17 projects in 11 tiger-range countries in support of the Global Tiger Recovery Program – 10 of these are being implemented in partnership with the UNDP, in six tiger-range countries including Malaysia. These projects adopt a comprehensive approach based on clear identification of threats and barriers and community involvement in the governance of natural resources, not only to conserve a critically endangered species, but also to maintain vital ecosystem services that are essential for improved livelihoods and sustainable development.