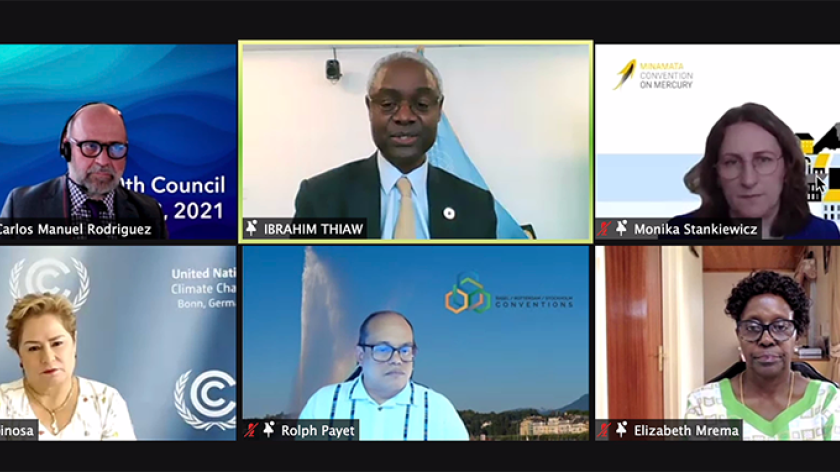 The heads of five international environmental conventions – on climate change, biodiversity, desertification, chemical pollutants, and mercury – joined the Global Environment Facility’s governing body to discuss their 2021 priorities and pledged to work together in new and more collaborative ways to address the planet’s urgent and inter-related challenges.

Appearing together at the Global Environment Facility’s Council meetings, the heads of five international environmental conventions called for a united front against the planet’s overlapping challenges, saying an integrated approach was necessary to tackle vast threats from climate change, biodiversity loss, desertification, chemical pollutants, and mercury use.

Close coordination is especially important in 2021 as countries spend trillions of dollars to restart their economies from the COVID-19 pandemic, which also resulted in the delay of several high-stakes environmental summits and negotiations, the executive secretaries told representatives of the GEF’s 184 member governments.

Patricia Espinosa, Executive Secretary of the UN Framework Convention on Climate Change (UNFCCC), described progress in negotiations leading up to the COP-26 climate summit due to take place in Glasgow, Scotland in November, and stressed the need for robust funding via the GEF to enable developing countries to fulfill their emission reduction and tracking commitments amid “a generation-defining transition” for the global economy.

“Climate change, like the coronavirus, recognizes no borders or political ideologies. Nor does it care about economic jurisdictions,” she told the session, which was held virtually because of the ongoing COVID-19 pandemic. “Due to our interlinked global economies, when one nation is impacted, all feel the pain. Support to developing nations is an act of self-interest, and the GEF’s mandate exists at the center of this work.”

Elizabeth Maruma Mrema, Executive Secretary of the UN Convention on Biological Diversity, said close collaboration across the GEF partnership was important to all aspects of the new targets being developed for the upcoming 15th Conference of the Parties, which was originally scheduled for 2020 and is now set to take place in October in Kunming, China.

Mrema said the new Post-2020 Global Biodiversity Framework was meant to inform and compel action by all governments, stakeholders, international organizations, and multilateral environmental agreements, including regional conventions, in order to protect the variety of plant and animal species and ecosystems upon which human life depends.

“The GEF will have an important role in stimulating integrated approaches to implementation, cutting across all its focal areas,” she told the Council. “Clearly, the GEF will be indispensable in the implementation by eligible countries of all such aspects of the eventual framework.”

Since its launch before the Rio Earth Summit, the GEF has provided more than $21.5 billion in grants and mobilized $117 billion to support environmental action in developing countries and to finance the activities of multilateral environmental agreements. Negotiations are underway over the size and scope for the trust fund in its next four-year funding period which starts in July 2022.

Noting this is the 30th anniversary of its creation, Ibrahim Thiaw, Executive Secretary of the UN Convention to Combat Desertification (UNCCD), said the GEF had evolved to become “more than a funding mechanism” for the conventions helping developing countries meet their international environmental obligations.

“The Global Environment Facility turns out to also be a knowledge hub. A science advisor. A rallying point where different constituencies, big and small, meet and exchange views,” Thiaw said. “The GEF did not solve all of our problems. It could not, and it was not meant to. But over the last 30 years, across generations of projects, we have made remarkable progress, though much remains to be done.”

Thiaw described the push to restore degraded lands as “an immediate and concrete climate action” as doing so would remove carbon from the atmosphere and in turn reduce ocean acidification, also reducing the impacts of droughts, floods, and other shocks on vulnerable communities, while also supporting animal and plant species.

“Keeping the land and soil healthy is one of the best ways to prevent biodiversity loss both on land and at sea,” he said. The UNCCD will hold its 15th Conference of Parties next year, with a date and location to be announced shortly.

Indonesia will host the fourth Conference of Parties of the Minamata Convention – which is focused on ending harmful exposure to mercury – in two segments: the first will be held online in November, and the second will be held in-person in late 2022.

Monika Stankiewicz, the Minamata Convention’s Executive Secretary, stressed that a Technical Advisory Group meeting hosted by the GEF in February had shown that investing in any focal area provides benefits to other focal areas, and programmatic approaches produce transformational changes.

“At the same time, the needs are vast, and underinvestment in any focal area will put at risk other focal areas,” she said, describing the potential for broad global environmental benefits from reducing mercury emissions and from disrupting mercury trade and supply chains. “We must not lose sight of the needs of the conventions.”

The Stockholm Convention, which works to phase out and eliminate toxic and dangerous chemicals, will also hold its 10th Conference of Parties in two segments – the first will be online and in July, and the second will take place in June 2022 in Geneva, Switzerland.

“The theme of the COPs is global agreements for a healthy planet,” said Rolph Payet, Executive Secretary for the Basel, Rotterdam and Stockholm Conventions, describing urgent funding needs to make progress against chemical pollutants, plastics, and plastic additives that can have harmful health and environmental effects.

Payet called for increasing linkages and coordination between and across the multilateral environmental agreements that receive financial support from the GEF.

“I say this because sometimes there is a misunderstanding that climate change stands on its own, that biodiversity stands on its own,” he said, noting many connections between those agendas with chemicals and waste, including from the poor management of landfills, plastic waste in the ocean, land pollution, forest loss, and more. “The links are very strong,” he said.

GEF CEO and Chairperson Carlos Manuel Rodriguez welcomed the collaborative spirit of the discussions and said the multilateral fund was committed to help through its unique role as an integrator across the breadth of environmental challenges, saying: “We are all aligned to support a green, inclusive, resilient, clean recovery from the pandemic.”

“More than ever, there is growing recognition, and commitment, to take strong and integrated global action on nature, climate, land, chemicals, and waste,” he said. “We need to work across multiple dimensions of the global environment if we want to have the impact the planet needs.”