Biodiversity for development: Weaving environmental benefits into the fabric of society 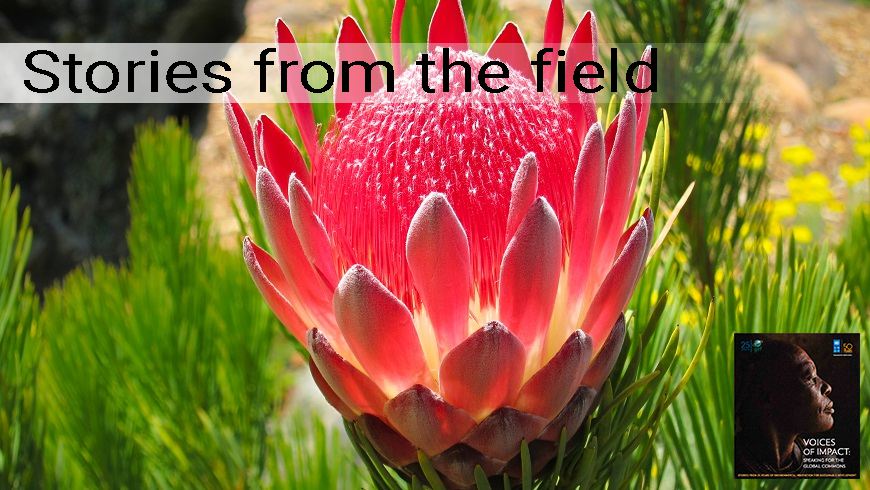 "GEF resources have catalysed three major streams of work: expansion of protected areas through biodiversity stewardship; avoiding loss of species and ecosystems by incorporating biodiversity priorities into spatial planning and land-use management in multiple sectors; and optimising efficiency around restoration of ecosystems."

“It was during my childhood years in Malawi that my interest in the natural world was first awakened. We did not live in a city, and I spent nearly all of my time outdoors. But it was when I was in the ninth grade at school, and I looked down a microscope for the first time at leaves and guard cells, that my mind was made up - I was going to become a botanist! I went on to study Botany at university before taking up my first job with the Botanical Society in South Africa.

I was given the opportunity through UNDP to participate in the development of the Agulhas Biodiversity Initiative (ABI) – this was one of the earliest GEF-financed interventions in the country that worked to minimise biodiversity loss by working with landowners and communities outside of protected areas. These were the early days of our partnership with the GEF and UNDP, but they laid the foundation for a long-standing relationship that has revolutionised what we have been able to achieve.

The ABI process took place in parallel with the development of the CAPE biodiversity mainstreaming project, which was one of my first experiences of working through big, multi-stakeholder partnerships – CAPE grew into a dynamic community of practice that still operates today, providing an essential knowledge network that brings together stakeholders from different sectors to identify common issues and seek collective solutions. My initial involvement in CAPE was to provide technical inputs on various task teams, where I represented civil society, working as I did at the time for an NGO – little did I know that, a few years later, I would find myself responsible for overseeing the implementation of several key components of CAPE, and, ultimately responsible for the final phase of the project.

In 2003, I was appointed to lead a division within the newly-constituted South African National Biodiversity Institute. SANBI was born out of the former National Botanical Institute, but carried a much broader mandate – key amongst its new functions was the co-ordination of programmes of action involving civil society and other stakeholders to promote conservation and sustainable use of biodiversity. This broke new ground for SANBI, and also signalled the beginning of a remarkable transformational process, through which we – as SANBI, and the broader biodiversity community – were able to weave environmental investments into an integrated fabric of work, to mainstream biodiversity into the development agenda in South Africa.

After a few years, my division was given responsibility for co-ordination of various components of the CAPE programme, as well as other biome-based (bioregional) programmes supported by the GEF, UNDP, World Bank and Critical Ecosystem Partnership Fund in different parts of the country. But, it was in the GEF-funded Grasslands Programme that I was involved from the design phase to its closure in 2015. Drawing on our experience from other bioregional initiatives, and with technical support and mentorship from GEF and UNDP, we were able to lead both the development and implementation of an 8-million dollar programme to ensure that production and development activities in our country’s grasslands were located and managed in ways that maintain the delivery of ecosystem processes essential for underpinning the economy. Although the GEF-funded project has now closed, the results of this work are being sustained and scaled-up through other programmes of action led by NGOs, the private sector and government departments. I think this stands as testament to the tremendous impact the projects have had in developing institutional capacity and influencing the appetite for – and commitment to – this type of work in South Africa.

As support from the GEF grew, the programme I was responsible for leading also expanded – it morphed from being a small division with a handful of staff responsible for co-ordination of bioregional programmes, into a division for biodiversity planning and information management, and, ultimately, into a directorate for biodiversity information and policy advice, with a staff of more than 50 people – more than two thirds of whom I am proud to say are women! We co-operate with a managed network of partner institutions – universities, government and the private sector – many of whom were initially brought together through one or other of the GEF-funded projects. The scope of our work – and that of the sector as a whole – has blossomed and matured. Areas such as landuse planning and environmental management – which had initially formed discrete components of funded projects – have now grown into fully-fledged programmes of their own. For example, through programmes such as ABI, CAPE and Grasslands, we pioneered biodiversity stewardship as the most efficient way of involving private landowners and communities in protecting important biodiversity on their own land. The impact of this has been enormous. We have now developed a national business case for biodiversity stewardship, which is being rolled out across the country as a way of expanding the protected area estate, whilst respecting people’s land-use rights – some 550,500 hectares of land have been brought under formal protection using this model. The bioregional programmes gave us the space to explore new concepts such as ecological infrastructure, which is now the subject of a dedicated GEF-financed project on water security, development finance and infrastructure, working at the levels of both national policy and practical intervention at catchment level.

Through this process, we have defined more clearly what we need to do. GEF resources have catalysed three major streams of work: expansion of protected areas through biodiversity stewardship; avoiding loss of species and ecosystems by incorporating biodiversity priorities into spatial planning and land-use management in multiple sectors; and optimising efficiency around restoration of ecosystems.

We have also learnt a lot about how to work: three things are important – partnerships, processes and products. Process is a really important part of the journey – we have not always got it right, but we certainly have an increased appreciation for how much time and effort needs to go into the process. Without strong partnerships and investment in people, the resources we have to spend are impotent. And we need products to optimise return on investments – products that address real issues and are useful to the end-users, such as the Mining and Biodiversity Guidelines.

It is through partnerships that we have reached the government agencies central to biodiversity management and sustainable use of natural resources. This has altered the way people and institutions think and operate – in urban development, mining, forestry, and integrated environmental management. We have gained good traction in the water sector with engineers and municipal managers. But our engagement has not been as successful in all sectors – we certainly hope to strengthen our interaction with agriculture in future. One of the biggest transformational impacts I have seen is in the development of human capacity in our biodiversity sector. Programmatic support has enabled us to link with a global network in the mainstreaming area, showcase our work, and tap into global experience and technical expertise. We have been afforded the opportunity to develop, trial and refine innovative approaches and tools to address environmental and sustainability issues in integrated ways, and train many new, young professionals. Consider the National Biodiversity Planning Forum as an example – this started in 2004, with a group of about 24 people, mostly scientists and SANBI staff. Since then, the Forum has convened every year and is now attended by over 250 people, drawn from all three spheres of government, industry, universities and civil society.

I would say that the overall impact of the GEF funded portfolio of projects has been to give us the ability – the muscle – to operate and influence in a much bigger space than we ever could have dreamed of, to integrate the environmental and national development agendas. Having a dialogue with the author of the National Development Plan to discuss the role of ecosystems in national development would never have been possible without the programmes funded through the GEF!

KRISTAL MAZE is the Chief Director of Biodiversity Information and Policy Advice at the South African National Biodiversity Institute, a public entity under the Department of Environmental Affairs. She leads a programme of work that delivers science-based advice in response to real-world policy and implementation challenges in a developing state. Through her leadership, SANBI, with its network of partners, has pioneered the development of spatial planning tools and other products to ensure that biodiversity priorities are incorporated into development decision-making, land-use planning and natural resource management across a range of sectors. Kristal has a Masters degree in Botany from the University of Cape Town, and is also a mother of two children.

Following South Africa’s transition to democracy in 1994, the country ratified a number of international environmental agreements, including the Convention on Biological Diversity in 1997. The two decades since have seen this mega-diverse country access GEF funding for some 15 biodiversity projects and programmes, through both UNDP and the World Bank. These investments have helped fulfill South Africa’s post-apartheid vision that biodiversity conservation should be undertaken in a manner compatible with social justice, equitable access to resources and economic sustainability, whilst building on the country’s high levels of capacity in systematic biodiversity planning.

Between 2004 and 2014, UNDP supported the Department of Environmental Affairs and partners – including SANParks, SANBI, provincial conservation agencies, and other national departments responsible for water, agriculture, forestry, fisheries, rural development and land reform – on four projects aimed at mainstreaming biodiversity conservation into wider production land- and seascapes, to maximise developmental co-benefits: the Biodiversity Conservation and Sustainable Development Project (CAPE); implemented in partnership with the World Bank; the Agulhas Biodiversity Initiative (ABI); Conservation and Sustainable Use of Biodiversity on the Wild Coast; and the National Grasslands Biodiversity Programme. These programmes helped shape South Africa’s ‘landscape approach’ to biodiversity conservation, that involves working both within and beyond the boundaries of protected areas, to manage a mosaic of land uses including protection, restoration, production and subsistence use, in order to deliver ecological, economic and social benefits.

A new GEF-financed project, the Biodiversity and Land Use Programme, was initiated in 2015 to support municipalities in effectively regulating land use to ensure that biodiversity continues to provide essential ecosystem services to citizens of South Africa.