The challenge of climate change in the Comoros 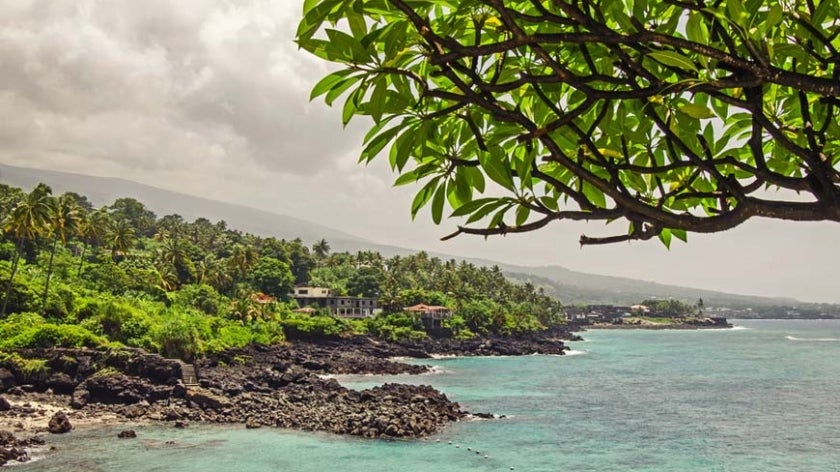 As 63-year-old farmer Mahmoud Hamidoune shelters from the rain hammering down on the peaks of the southern tip of Anjouan island in the Comoros, he recalls a time when it got so cold that people would stay home, and heading up the mountain to farm was called ‘going to Paris’.

When he was a boy, the land around Hadda village was so lush and rains so regular that harvests were always bountiful, and no one dreamed of selling the bananas that burst from the trees. “You would try to give them away to friends and neighbours,” he says.

But such customs started changing in the late 1960s, along with the microclimate on top of the mountain. Within a decade, people were noticing the temperatures rising and fog lifting as trees were cut down for timber and firewood. The area dried up as the droughts got longer and things literally started going downhill, as shorter but more erratic rains hitting increasingly denuded and steep hillsides washed crops and fertile topsoils into rivers and the glittering Indian Ocean below.

Increasingly unpredictable weather and continuing erosion of agricultural land means that very few farmers can now make a living from growing bananas. This includes Hamidoune’s 31-year-old-son Abdu Hamid, who has watched crop yields fall by a third over the past ten years. “The banana forest used to be so dense that trees would just shoot up,” he says. “Now, you have to spend a lot of money and use fertilizers, and still they die.”

Some free foods that villagers depended on have disappeared completely, including taro, a root vegetable that used to grow in the forest. Supplies of staples such as sweet potato have become scarce due to disease, which has also ravaged peppers and aubergines that now appear once a year, rather than several times, while tomatoes refuse to grow at all and can only be bought in towns.

“The rain has decreased and where there used to be so much there is so little,” says Hamidoune. His stories about the farming of yesteryear make Hamid want to live in the past. “In my grandparents’ day, they didn’t have electric tools to cut down trees in seconds,” and soils were so rich that crops practically grew by themselves, he says.

But from the forests leading down from the top of the mountain to Hadda and beyond, there is a constant line of men, women and children toting big and small logs, branches and whatever wood they can find and chop with small axes or machetes.

Asmina Abdu Hussein is one of many people who spend all day looking for enough wood to cook for her family. “I do this every day. I leave at 6 a.m. and come back at 5 p.m.,” she says. “It takes so much time now because a lot of the forest has been cut down.”

While some people dream of the climate changing back and their farming fortunes changing, others are abandoning their fields to try their luck in the towns, or risk death or deportation trying to move further afield.

The southern tip of Anjouan is now known for being the main point of departure for Comorian people trying to illegally migrate to the French territory of Mayotte, a nearby island once part of the Comoros, to work and send money home.

Anjouan Youssouf Elamine, the Director of Forests and the Environment at the Ministry in Moroni, the capital of the Comoros on the main island of Grande Comore, says the migration is directly linked to the degradation of farmland.

“The consequences are dramatic for Anjouan especially, because the forest on that island is really affected,” he says. “If we do nothing, desertification will continue and will really affect people, who we’ve already seen moving from one region to another because the soil is no longer workable.”

Telling people to stop cutting down trees to save their soils is difficult in a country where almost half the population lives on less than US$1.25 a day. “People are cutting down a lot of trees,” says Ahmed Gamao, who manages climate change adaptation projects at the Ministry of Environment in the Comoros. “Seventy per cent of the rural population depends on having wood for day-to-day living or for selling.”

With support from the Global Environment Facility’s Least Developed Countries Fund, UN Environment has been working with the Government of the Comoros and partners to revitalize 3,500 hectares of forests and watersheds. Starting in December 2018, the partnership will plant 350,000 trees per year across the three islands, while backing these reforestation efforts with capacity building at national and community level.

In Anjouan, the project is helping people in five communities to understand the importance of the forest and why certain water catchment areas on top of the mountains need to be protected and restored to replenish the soil and the supply of water.

Communities have been taught about how increasing levels of carbon dioxide in the atmosphere is changing the weather and raising temperatures, as well as how forests are needed to attract the rain, to provide shade to stop groundwater evaporating, and to stop shifting soil.

“I learned that here we really didn’t know how to protect our land — we were killing it,” says Faharddine Soumaila, a 33-year-old farmer. “But through this project, we are learning a lot about erosion and how to avoid it, because the rain was coming and taking it all the way to the sea. Now we know we can plant things to stop the soil going, and we can tell others about this and how trees protect and nourish the soil.”

Both Soumalia and Hamid had noticed how deforestation was making the land much drier but knew that the people cutting down trees to sell had no alternative. “Poverty is so severe that while we saw the effect it was having on the climate, we knew we needed some real long-term support to change it,” says Hamid.

The next phase of the project will help build people’s resilience to climate change by supporting reforestation. As well as providing tree seedlings to protect farmland from being eroded, the project also aims to make forests more valuable to the communities surrounding them by planting fruit trees and species sought by the pharmaceutical industry to make medicines and cosmetics. “In each village we are working with, we can see cooperatives building tree nurseries,” says Gamao.

People in Anjouan are eager to be involved in the project because adapting to climate change on an island with many tall mountains and increasingly sporadic but heavy downpours “is not just important, it’s a question of survival,” says Saindou Kassim, the Ministry of Environment’s technical coordinator.

“We’ve seen this problem of erosion for a while and people have been asking if someone would come and fund a project to help prevent this,” says Kassim, after explaining to a group of men gathered on a muddy hillside how planting grass strips and trees will enclose their farms, retain water and provide nutrients to the soil. “All this will give farmers the chance to recoup their land.”

Hamidoune hopes that the new trees bring the birds he used to see back to the mountain and help retain enough water to grow tomatoes, while Hamid’s hopes are of sky-high trees that will make the next generations look forward rather than back.

“If we don’t get trained on how to manage environmental issues, then the children won’t have anything for their future,” he says. “Now we know, we want to improve this area and make the trees grow high.”