Cleaning up our act: Conserving fragile ecosystems in the Galapagos islands 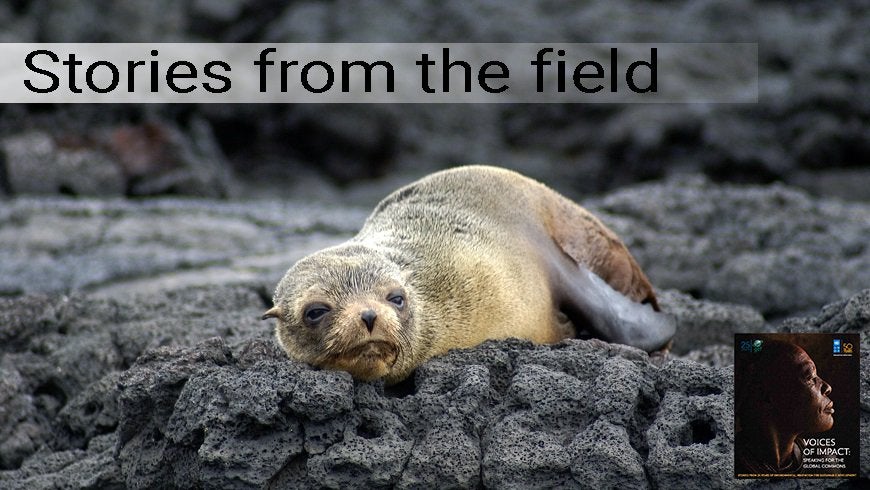 "The oil spill from the shipwrecked tanker, MV Jessica, polluted Naufragio Bay on San Cristóbal, triggering one of the worst environmental disasters the islands had known, with devastating impacts on populations of iguanas, sea lions, shore birds and rare marine species. Following this, we worked with UNDP to secure another GEF investment to develop oil spill contingency plans in case of future disasters."

“The Galápagos islands occupy a special place in the minds of people – what other place can claim to have had such an influence on the way we think about our natural world? Our island ecosystems are unique, not only because of emblematic species like the iguanas, tortoises and finches, but also because they are so isolated, unusual and fragile. At the same time, these islands are a premier tourist destination for wildlife viewing and diving, and this is an essential pillar of our economy – along with the farming and fishing that sustains our communities. This presents a complex set of challenges for those of us involved in biodiversity conservation here.

I was born on Floreana, the least populated island of the Galápagos, so the strong bond that I formed with the environment came naturally to me. My professional career began as a volunteer for the Charles Darwin Foundation, performing fieldwork for the study of ‘Petrel Pata Pegada’ (the Galápagos petrel). This involved spending long periods observing nesting birds on Santiago Island, to investigate the impacts of invasive animal species, especially goats and pigs. I quickly came to understand the seriousness of the threat that invasive animals posed.

During my time as Director of the National Park, we – together with the Darwin Foundation, the UNDP and GEF – designed a landmark project for the management of introduced species. We mobilized some US$ 18 million, and these resources facilitated a massive intervention to eradicate goats and pigs on Isabela, Santiago and some of the other small islands – literally thousands of alien animals were eradicated, allowing the natural habitat and species to recover.

Through the project we also strengthened the capacities of park rangers, generated manuals, and developed research projects on introduced species. All of these efforts culminated in the adoption in 2007 of one integrated, public policy instrument – the Plan for Total Control of Introduced Species – and the design and capitalization of a Trust Fund with a budget of US$ 15 million, which we leveraged thanks to the initial investment from the GEF. This Fund provides ongoing support for control and eradication of invasive species – work which continues to the present.

In 2001, we were forced to deal with another threat that these islands face – pollution. The oil spill from the shipwrecked tanker, MV Jessica, polluted Naufragio Bay on San Cristóbal, triggering one of the worst environmental disasters the islands had known, with devastating impacts on populations of iguanas, sea lions, shore birds and rare marine species. Following this, we worked with UNDP to secure another GEF investment to develop oil spill contingency plans in case of future disasters. Although the Jessica oil spill itself was overwhelmingly damaging, it put the spotlight on our high dependency on fossil fuels. It became obvious that we should secure investment for a new project to develop clean energy technologies, and that is how the ‘renewable energy for electricity’ initiative was born.

We now have a significant proportion of the energy requirements of San Cristóbal and Santa Cruz islands met through wind generation, a photovoltaic park on Floreana, and we are working on the creation of another photovoltaic park on Isabela. The individual and combined impacts of these projects have been profound. Beyond anything else, they have created a culture of care and respect for our natural heritage amongst the population, and also amongst decision makers – so much so, that a government agency for regulation and control of biosafety and quarantine has been established to provide controls at airports and maritime ports to ensure that our environment remains free from invasive alien species.

It is our responsibility to conserve the unique ecosystems of the Galápagos, but in ways that the population can benefit from ecosystem goods and services through sustainable, non-extractive use and integrated management of natural resources. We must create a healthy, environmentally sustainable economy that can be an example for the world. Our long term relationship with the GEF and UNDP has contributed fundamentally to the significant progress we have made, and it is my vision that this relationship should strengthen and grow as we work to reach even greater goals. With this, we can remain pioneers in conservation, whilst building our resilience to the increasing threats posed by climate change.”

A marine biologist by training, ELIECER CRUZ BEDÓN is a specialist in the management of protected areas. Eliecer is the current President of the Government Council for the Galápagos Islands, and is responsible for promoting sustainable development and ‘buen vivir’ (good living) in the archipelago within the framework of national policies. Previously, he worked as Undersecretary of Marine and Coastal Management for the Ministry of Environment, coordinating the work on Marine Protected Areas. He was Director of the Galápagos National Park for a period of 8 years, during which time he played a key role in driving the establishment of the Galápagos Marine Reserve. Eliecer previously served as Vice President for the Charles Darwin Foundation during the period 2005-2007 and as the Eco-Regional Representative Director of the World Wildlife Fund for Galápagos.

The Galápagos Islands are situated in the Pacific Ocean, some 1,000 km from the Ecuadorian coast. This collection of islands, islets and rocks, and the surrounding ocean, are known as a unique ‘living museum and showcase of evolution’. Situated at the confluence of three ocean currents, the Galápagos marine environment is one of the most diverse and spectacular in the world. 97% of the total land surface of the archipelago falls within a National Park, with human settlements restricted to specifically zoned areas on only four of the islands. The islands are surrounded by the Galápagos Marine Reserve, which is one of the largest in the world.

Invasive alien species pose the single greatest threat to the integrity of the Galápagos ecosystems, and the unique assemblage of species they support. Since people first arrived in the islands in the 1500s, they have – intentionally or by accident – introduced a host of alien plant and animal species. Through predation, competition, modification of habitats and introduction of diseases, these species have had a devastating effect on the natural biota of the islands.

Between 2001 and 2011, a series of three UNDP-supported, GEF-funded projects have provided multifocal and integrated support to the Galápagos to build capacity for controlling invasive alien species; reduce the risk posed to wildlife by oil pollution and strengthen the capacity for dealing with oil spills if they occur; and to remove barriers to the development and utilization of low-emissions, renewable energy for electricity generation. The combined impacts of these investments has been to strengthen the protection of the unique natural heritage of the Galápagos, and reduce reliance on fossil fuels, thereby safeguarding the natural capital that is the lifeblood of the economy, and contributing to a better quality of life for the communities on these islands.