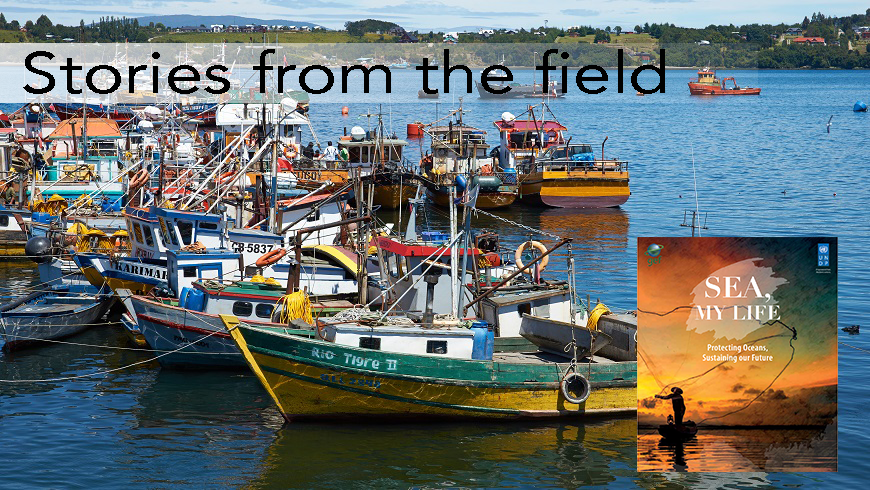 Between 2011 and 2016, UNDP provided support to the Governments of Chile and Peru to implement ecosystem-based management as a strategy for restoring and sustaining the health, productivity, resilience and biological diversity of the Humboldt Current Large Marine Ecosystem, and the quality of life of the people who depend on its bounty.

Cold, slow, and bursting with life – this is the Humboldt Current, a stream of sub-Antarctic water that flows in a northerly direction along the coasts of Chile and Peru, before veering westward across the Pacific to bathe the Galapágos Islands. These nutrient-rich waters support some of the densest populations of fish found anywhere in the world – millions of anchovies, sardines and jack mackerel provide food for an extraordinary abundance of other marine fauna both at sea and on the shore.

The high productivity of this ecosystem is caused by upwelling – a process in which wind-displaced surface waters are replaced by cool, nutrient-rich water that ‘wells up’ from beneath. The Humboldt Current is the largest upwelling system in the world, supporting one of the most productive of the large marine ecosystems. It provides six percent of the global fish catch (down from 20 percent in 2010), generates goods and services valued at about US$20 billion annually, and hosts globally significant biodiversity.

This unique ecosystem is being placed at risk by over-fishing and rapid coastal development which results in habitat destruction and pollution. It is also particularly vulnerable to the impacts of climate change. During El Niňo events, shifting wind patterns and increased sea temperatures result in the layer of warm surface water extending to greater depths and this prevents upwelling. Lower productivity causes fish stocks to collapse, which, in turn, triggers a cascade of negative environmental, social and economic impacts.

Between 2011 and 2016, UNDP provided support to the Governments of Chile and Peru to implement ecosystem-based management as a strategy for restoring and sustaining the health, productivity, resilience and biological diversity of the Humboldt Current Large Marine Ecosystem, and the quality of life of the people who depend on its bounty. This project, which was funded as part of the GEF International Waters programme, set out to establish and strengthen priority marine protected areas and fisheries management tools as part of a bi-national strategic action programme to implement ecosystem-based management. It also put in place measures to address policy and capacity gaps that presented barriers to the design and implementation of the strategic action programme.

Ecosystem-based management is a proactive and holistic approach to managing ecosystems in a way that balances conservation with sustainable use of marine resources and ecosystem services. It addresses multiple issues to manage ecosystems within the limits of their ecological functioning, whilst considering the economic and social context of management actions. Importantly, it recognizes that people are an integral part of natural ecosystems and that effective management solutions must involve all relevant sectors of society. The role of marine protected areas within ecosystem-based management approaches varies depending on the spatial scale and the extent and nature of the stressors in the system.

Peru has implemented a system of land-based ‘Natural Protected Areas,’ with a marine protection component comprising an area of two nautical miles around a cape or island. These protected areas are closely associated with centres of human settlement and activity, and play an important role in reducing the cumulative impacts of overfishing and other stressors, in addition to maintaining connectivity between protected areas along the entire length of the Peruvian coastline. An important intervention of the Humboldt Current project was to facilitate the participatory processes necessary to secure the zoning of the 22 islands and 11 capes making up the Guano Islands and Capes National Park, and to negotiate inclusive co-management schemes with local communities to manage local fisheries and protect biodiversity.

In Chile, the majority of coastal and marine protected areas are not situated close to fishing villages. While some protected areas are close to the mainland, the majority encompass extensive areas of ocean some distance offshore. In the Juan Fernández Multiple Use Marine Protected Area, which centres on Robinson Crusoe and Alejandro Selkirk Islands, the main income for the 285 households living in the islands comes from the endemic rock lobster fishery and tourism. A priority of the project was participatory development of tourism and lobster management plans within the protected area. The lobster fishery became the first artisanal fishery to be certified by the Marine Stewardship Council (MSC) in the south-east Pacific. The success with which ecosystem-based management has been applied by the local authorities and island communities is demonstrated by the fact that it was the islanders who initiated the requests for certification of the fishery, and the establishment of the Juan Fernández Multiple Use Marine Protected Area (and its five associated Marine Parks).