Empowering fisherwomen in Turkey yields returns for environment and equality 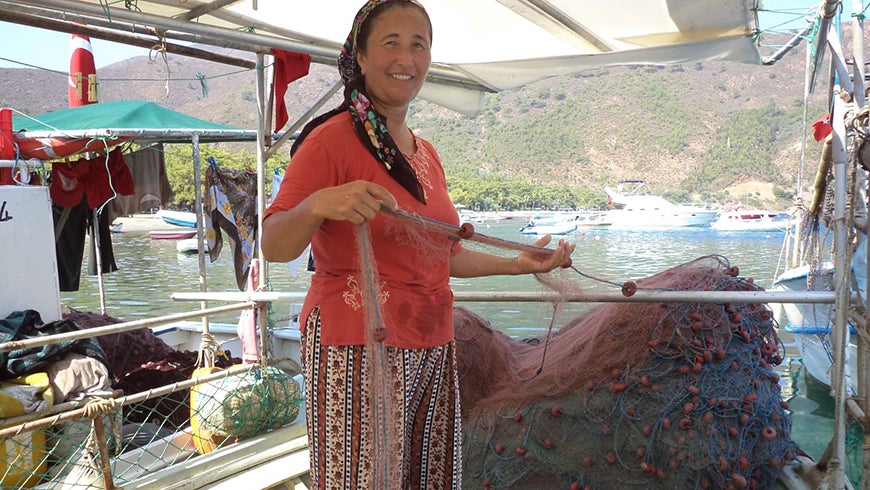 Small-scale fisheries have historically been active across most of coastal Turkey, including along Gökova Bay - a magnificent 45-mile long stretch of aquamarine waters located on the southern Mediterranean coast.

Fisheries make up an important source of livelihood for local communities. In Turkey, fishing has traditionally been regarded as a male domain. As a result, many women’s contributions in the fisheries sector have been considered a part of domestic work, and therefore undervalued, undocumented, and under-represented or overlooked in official statistics.

In 2009, the Underwater Research Society, a GEF Small Grants Programme (SGP) grantee partner, aimed to tackle issues of over-fishing and over-capacity fishing fleets by establishing no-take fish zones in the Gökova Bay marine protected area with active involvement of women. Through multi-stakeholder consultations, the non-governmental organization and the community were able to agree on appropriate measures of monitoring and enforcement to protect the area.

Consultations undertaken through the project revealed that women were not accounted for as active fishers in Turkey. Due to this invisibility, the women were not consulted in small-scale fishery governance, nor was there information available on the challenges they face.

Building on the previous work by the Underwater Reseach Society, in 2013 the Mediterranean Conservation Society (MCS) received an SGP grant to launch a project to map the numbers of women fishers in the Datça-Bozburun Peninsula, to adequately respond to their needs, and to ensure their inclusion in decision-making processes around sustainable small-scale fisheries and conservation in Turkey.

This project was supported by the Community Development and Knowledge Management for the Satoyama Initiative (COMDEKS); an initiative funded by the Japan Biodiversity Fund and implemented by UNDP through the GEF Small Grants Programme, in partnership with the Ministry of the Environment of Japan, the CBD Secretariat, and the United Nations University’s Institute for the Advanced Study of Sustainability.

MCS has pioneered the innovative use of technology for marine conservation and the organization’s impressive results have inspired other communities. For example, MCS has implemented the first SMART-marine software for women marine ranger patrols in the world, developed by the Zoological Society of London. The monitoring and protective enforcement activities enabled by this technology has led to positive results for the community’s livelihoods and the environment.

When I witnessed the loss of biodiversity and the collapse of fish stocks' impact on local communities I decided to establish the Mediterranean Conservation Society with a diverse group of people from academics to local fishermen. We established No Fishing Marine Protected Areas and took the responsibility of enforcement and monitoring by empowering the local community’.

Since the establishment of the no-take fish zones and the marine ranger enforcement system, monitoring data show that the ecosystem has been recovering rapidly. One of the key indicators, average fish biomass, is four times higher within the Gökova Bay protected area, then it is in surrounding areas. Fish stocks have increased by 800 percent, monk seals are now present in the area and can be observed feeding in the zones, and sandbar sharks are sighted regularly. 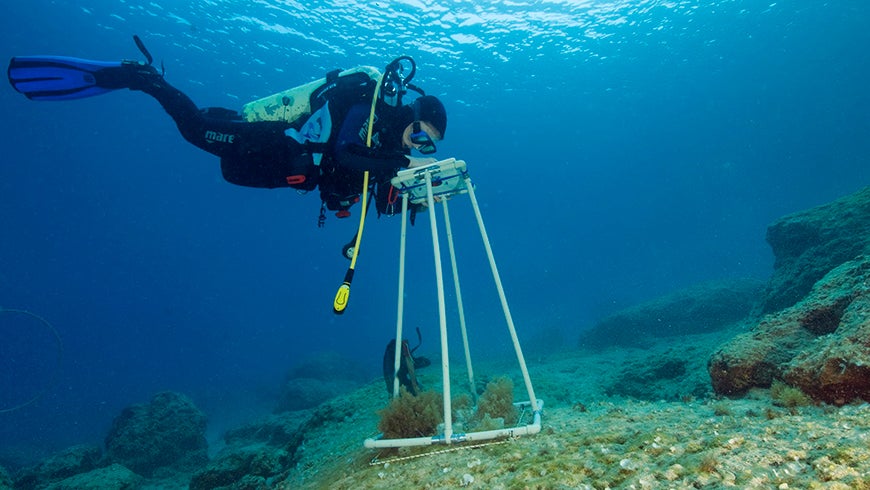 The success of the initiative led the MCS to receive a second grant through COMDEKS in 2015 to train women in entrepreneurship. The goal was to support women in artisanal fisheries to create alternative sources of income, building an organizational model specific to the needs of the fisherwomen, and enabling them to contribute to sustainable fisheries.

To scale up the initiative, the organization received another grant to map fisherwomen at the national level. Using gender-based data collection in fisheries, and determining both the number and locations of fisherwomen in the Gulf of Edremit, Lake Beyşehir, and the Datça-Bozburun peninsula, the effort revealed that more than 3,000 fisherwomen are active in inland waters and coastal areas and are associated with 553 fishery cooperatives in Turkey.

The results also revealed that 61 fisherwomen are running their fishing livelihood operations alone, without the support of a husband or another family member. The effort resulted in Turkey’s first report on the status of fisherwomen, which was distributed widely to create awareness and improve their conditions.

"We attended the fisherwomen training program. To illiterate people like us. It was very useful. We learned from each other and share our experience, create a shared vision, reach a common goal, and develop a plan action for Beyşehir Lake.”

The impact of these efforts over time have led to concrete socio-economic benefits to the women and their communities. The Akyaka Fisheries Cooperative reported a fourfold increase in their revenue between 2010 and 2016: an increase from 1,422 to 6277 Turkish liras per boat per month.

More than 120 women were trained in sustainable fisheries and they now have direct communication with local authorities such as the local mayor and the provincial director of Ministry of Food, Agriculture and Livestock to promote the good practices.

Furthermore, 450 local fishing cooperatives shifted their traditional practices to recognize the work of the women, empower them, and give them voice in decision-making meetings by learning from the cooperatives supported by the SGP. Consequently, women were able to overcome key constraints associated with fisheries management, including lack of recognition, unequal sharing of income, and access to equipment.

Networking between the different local fishery cooperatives encouraged solidarity among the women, which led them to organize themselves and reach out to fisherwomen in other regions. In addition to the concrete environment and social benefits that we have seen through the projects, the activities have led to elevate the status of the cooperatives and were officially recognized as eligible groups who can seek microfinance through the Turkey Grameen Micro Credit Program.

Results that are award-winning

In 2014, MCS won the Equator Prize due to the unique community-led creation, patrolling and scientific monitoring of a network of no-take zones, which have vastly increased fish abundance and food security, strengthened local livelihoods, and engaged women. 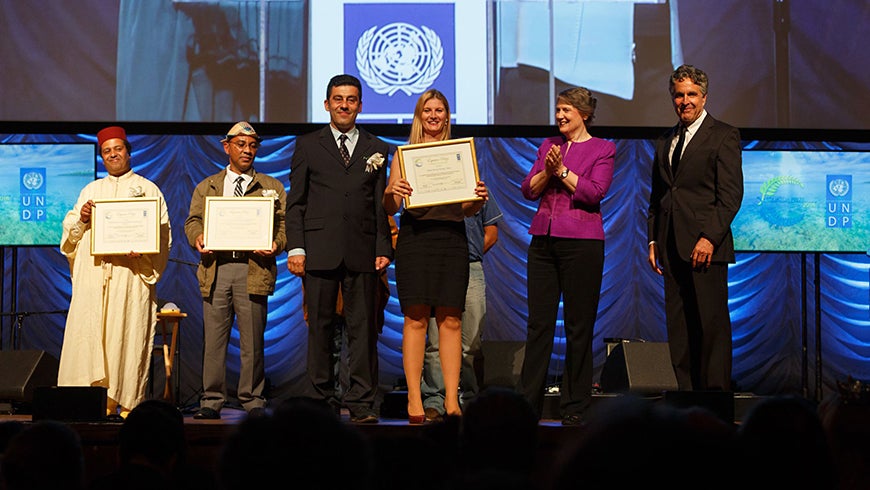 In 2019, the fisherwomen and the experts who were in charge of the projects as well as other volunteers, formed the Fisherwomen Society, a unique civil action platform to continue empowering fisherwomen. The society recently started a new project on blue economy that involves the private sector in the production of sustainable products while aiming to minimize the threat of invasive species on marine stocks.

Since 1993 when SGP grants began in Turkey, SGP Turkey has supported over 300 projects to protect biodiversity, address climate change, and prevent land degradation.

By providing financial and technical support to projects that conserve the global environment while enhancing people's well-being and livelihoods, SGP demonstrates that through a mix of motivation, creativity, technology, and knowledge, we can find concrete solutions to some of our most pressing social and environmental challenges.

For more information on this specific project, please visit the project profile: Rehabilitation of East Mediterranean Algea and Ecosystem via Creating a ‘No Take Zone’ in Gökova.

Schooling together: peer to peer learning for sustainable fisheries management