Food for tomorrow, in any weather: Fostering resilience for food security in Benin 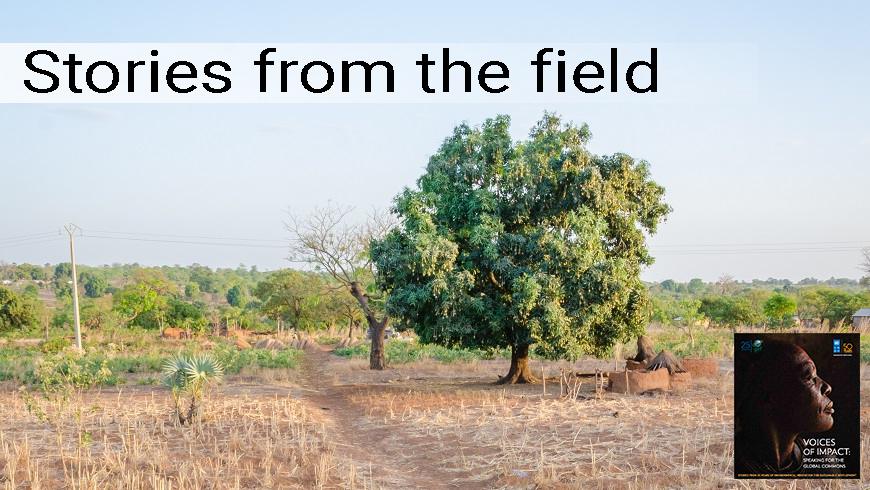 "It is because of the weather information and the training and equipment we received that we can now harvest twice a year, we can grow food all year round, our harvests are much better and I can sell more of my produce."

“I have been a widow for many years, so caring for my children has weighed heavily on me. For women like me, even when our own children are grown up, we have our grandchildren to look after and feed, because their parents go to the towns to look for work – there is no other work for them here. The mothers come back home to the village when it is time to have their babies, and then we care for the children when the mothers go back to the city.

Agriculture is the only activity I know, since this is what I did with my husband before he died. Here in the villages, we have to be able to look after ourselves because it is not easy to travel to the towns to buy food or supplies – the roads are bad (especially when it rains), and we often have to travel by boat. So we grow food to feed our families and if there is anything left we can sell it at the market – that is the only way we can earn money to afford the other things we need, so it is important that we can grow enough to feed the children and care for them properly. Before this project came to our village, our farming activities were limited to sowing maize or rice once a year. If the rains didn’t come on time, we would lose our crops and there would not be enough food. But since being supported by the PANA-1 project, everything has changed. Now, thanks to the weather station, we receive regular information on rainfall. We know when to sow and when not to, and we are spared from losing our crops. The improved seeds we have received through the project have allowed us to plant and harvest twice a year – this has never happened before in this village. We can also grow different kinds of crops now. What’s more, even when there is no rain, we can use the water from the water reservoir built for us by the project to grow tomatoes, vegetables and chili pepper.

It is because of the weather information and the training and equipment we received that we can now harvest twice a year, we can grow food all year round, our harvests are much better and I can sell more of my produce. Because of this, I am now getting three times more income than I did before. This makes me very happy because I am making a decent living now from selling maize, rice and vegetables; I can afford more of the things that we need. For many years before the project, the roof of my house was broken and the children and I were exposed to the weather. Now, I have been able to fix the roof and I am even building another house – this is better for the health of the children. I am also able to buy more clothes and can dress better.

We can now feed our children and send them to school, even in the times when the weather is harsh.”

LEONTIN TOHOU is the leader of a women’s group in Damé Village – an agrarian community of some 1,200 people in the Savalou Commune in north-central Benin. In her mid-fifties, Madam Tohou is a mother of four children, and a grandmother of six. Like most of the women in her community, she is a farmer, raising food to meet her family’s needs and to earn a living.

Benin is heavily reliant on largely rain-fed, subsistence agriculture for employment and livelihoods. Increasingly unpredictable rainfall and more frequent severe weather events (high winds, extreme heat, floods and droughts), have resulted in declining crop yields, increased crop losses, disruption of the agricultural calendar, dwindling farm incomes, and escalating degradation of land and natural resources. This has resulted in increased food insecurity, with marginalised groups, including women and children and the rural poor, amongst the worst affected.

Benin is working to increase its resilience to the adverse impacts of climate change through both near- and long-term adaptation measures in affected sectors, areas and communities. As part of this process, UNDP has supported nine projects to date, focussed on different aspects of climate change. These projects are geared to help the country gain a better understanding of the complexities of climate change, address its root causes and adapt to its impacts, through interventions that span the full development agenda.

The project featured in Leontin Tohou’s story, ‘Combating adverse effects of climate change on agricultural production and food security in Benin’ (commonly known as PANA-1), emerged in response to urgent climate change adaptation priorities identified in Benin’s National Adaptation Programme of Action, and was funded by the GEF through the Least Developed Countries Fund. PANA-1 worked to improve capacity for forecasting, assessing and managing impacts of climate variability, and implemented climate-resilient agricultural practices to reduce poverty, alleviate hunger and build sustainable livelihoods, especially among women. Activities were implemented in 9 Communes spanning four vulnerable agro-ecological zones, with direct benefits to some 2,200 people (one third of which were women), and indirect benefits to an additional 12, 155 community members.