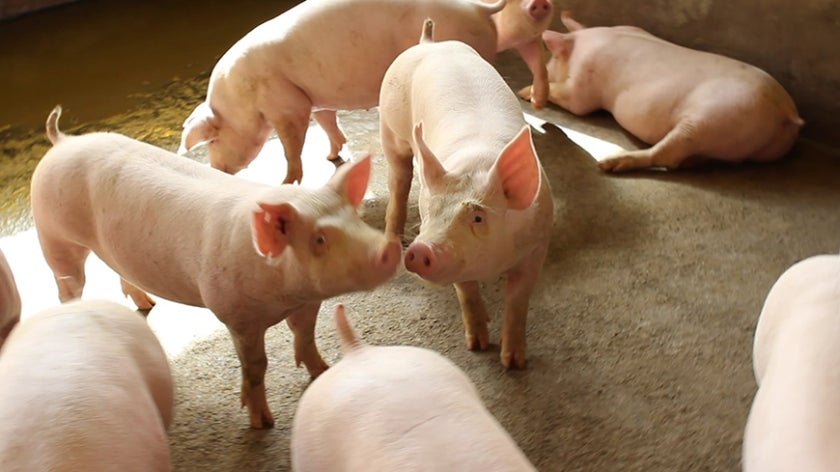 Pigs on a Brazilian farm

Pedro Colombari owns a farm with five thousand pigs in the small town of São Miguel do Iguaçu in the southern Brazilian state of Paraná. He started producing biogas in 2006 and uses it to supply his farm with electricity.

“It’s easy to produce biogas in pig farming. The system is very simple,” says Colombari. “The system works by gravity. In the morning, the pigs’ waste gradually slides towards the biodigester through pipes.”

Biogas is a renewable energy source generated from the decomposition of organic waste produced by farms, restaurants, agroindustry, and others. The waste is directed to covered pools where its decomposition results in the release of biogas. What is left – called bio-digestate – is used as fertilizer.

Biogas can generate electric power, thermal energy or fuel for transportation with positive impacts for the environment: reducing greenhouse gas emissions into the atmosphere and lowering nitrogen or phosphorus pollution in streams, rivers, and the soil around farms.

Currently, Pedro Colombari’s biogas plant generates enough electricity to supply not only his farm but three other properties nearby. The energy surplus is fed to the local power grid: “We save around a thousand dollars a month, so it’s a significant amount of savings.” After biogas is generated, he uses the resulting bio-digestate to fertilize his pasture.

Further north, in the state of Paraná, at Entre Rios do Oeste, closer to the border with Paraguay, Romário Schaefer runs a brick factory. He decided to establish a pig farm nearby to supply his business with electric energy from biogas.

Schaefer says he took this decision “for several reasons.” “First, electricity is expensive, particularly between 6pm and 9pm. Second, we can rely on our biogas plant whenever there is an energy shortage in the city.”

His factory’s electricity bills used to count for 13% of the production costs, since brick manufacturing is an energy-intensive business. The biogas plant cut the electricity cost by half. “We already have plans to expand our pig farming, and to burn biogas to heat the furnace.”

According to the Brazilian Biogas Association (ABiogás), Brazil has the greatest biogas potential in the world. However, data from ABiogás and from the International Centre of Renewable Energy (CIBiogás) shows that Brazil has only 366 biogas plants and only exploits 2% of its total biogas potential. Biogas could supply up to 36% of Brazil’s national electricity demand or cover 70% of its diesel oil consumption.

Brazil is also the fourth biggest consumer of biofertilizer in the world and currently imports 65% of the biofertilizer it uses. If biogas – and therefore bio-digestate – production increased, it would represent a market opportunity for local companies.

The United Nations Industrial Development Organization (UNIDO) implements an initiative called Brazil GEF Biogas Project, funded by the Global Environment Facility (GEF) and coordinated by the Brazilian Ministry of Science, Technology, Innovations and Communications (MCTIC). The project aims to develop the biogas value chain in Brazil and to convert organic waste into electric power, thermal energy, and fuel for transportation.

The project also aims to promote employment and innovation by assisting agroindustry ventures in the south region of Brazil and plans to support municipal waste management businesses in the near future. ABiogás and CIBiogás are among the main partners. Beneficiaries will have access to up-to-date data on the supply of and demand for biogas, innovative business models, updated regulations, favorable public policies, tailor-made financial services, technical assistance, and training services.

UNIDO’s representative for Brazil and Venezuela, Alessandro Amadio, believes that the immense volume of biomass available in Brazil allows for innovative business models.

“The biogas sector in Brazil does not necessarily need technological development, as the technology is already well established”, he claims. “The added value of our GEF project lies in its ability to foster a conducive business environment with suitable public policies, financial tools, and innovative business models, supporting value chains.”

Amadio says that the starting point for the development of a biogas strategy should be the end user of the core products, such as bio-methane gas, CO2, electric power, or thermal energy.

“The Brazil GEF Biogas Project intends to develop a biogas production chain based on the end-user demand, foreseeing the inclusion of the agricultural sector as well as complementary sectors, such as the food industry, sanitation, municipal and industrial waste, in a way that is integrated and economically profitable.”

Vinicius Guilherme Fritsch is the Energy Business Manager of Castrolanda, an agro-industrial cooperative in the state of Paraná. He oversees a thousand members and three thousand contributors involved in milk, pork, bean, potato, cereal, and energy production.

Fritsch draws attention to some of the current obstacles that are preventing the sector from growing, stating, “I believe that the main challenges are the costs of imported equipment, the costs for the automation of biogas plants and the complexity of properly designing a project in this sector."

On the other hand, he believes that the main economic advantage of biogas and biomethane production is the transformation of waste into something profitable and manageable.

“We are able to monetize what was previously organic waste, and we can give it an appropriate destination.”

This piece was originally posted by the UN Industrial Development Organization.