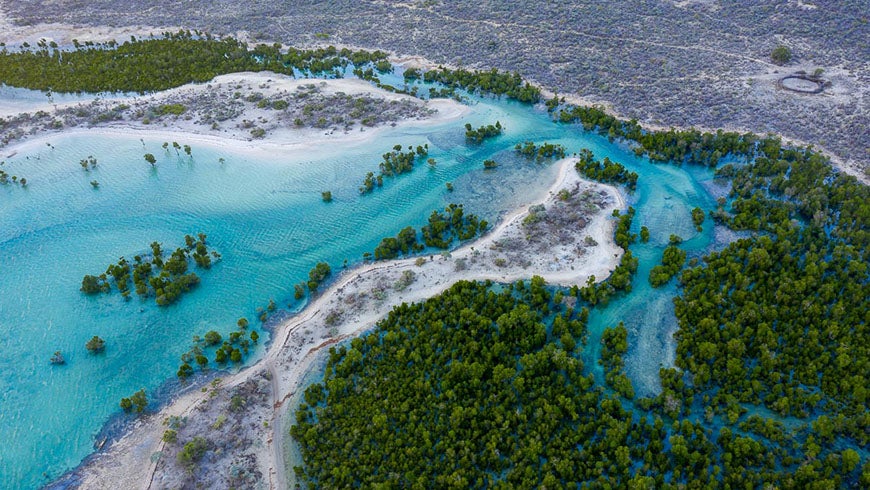 With backing from the Global Environment Facility, the Blue Forests Project—a collaboration between UNEP and GRID-Arendal—is working with partners across eight countries to test ‘blue carbon’ and other nature-based climate solutions, setting the stage for countries to help countries fulfil the goals of the Paris Climate Agreement by upscaling these approaches globally. Photo: Louise Jasper/Blue Ventures.

They call them ‘blue forests’—and they are among the most productive and valuable habitats on Earth.

However, it’s their potential in the fight against climate change that is making mangroves the new superstars of coastal conservation efforts.

“They can absorb and store as much as 10 times the carbon as terrestrial ecosystems—so it goes without saying that they are a critical part of efforts to overcome climate change.”

But despite their value to the environment and coastal economies alike, globally mangroves are being lost at an alarming rate — three to five times faster than other forests.

“Over one third of the world’s mangroves have been lost over the last 100 years,” Vanderbeck says. “It’s a trend that has to stop now if the species and communities that depend on them are to survive.”

However, growing recognition of mangroves’ role in both mitigating and adapting to climate change, combined with a growing global market for carbon offsets, is providing a lifeline for mangrove ecosystems the world over.

With backing from the Global Environment Facility, the Blue Forests Project—a collaboration between UNEP and GRID-Arendal—is working with partners across eight countries to test ‘blue carbon’ and other nature-based climate solutions, setting the stage for countries to help countries fulfil the goals of the Paris Climate Agreement by upscaling these approaches globally.

“Through the Blue Forests Project, we are exploring how coastal carbon and ecosystem services can be harnessed to fight climate change, boost conservation and provide sustainable livelihoods,” Steven Lutz, project coordinator at GRID-Arendal, says.

“Blue Forests builds on ‘blue carbon’ market success.” Lutz says. “Our partner site in Gazi Bay, Kenya is the world’s first working blue carbon’ market project, where carbon finance has been supporting communities to conserve and restore mangrove forests for the past few years. Profit from the Gazi Bay project also supports community development activities such as the building of freshwater wells.”

Just last month, the project celebrated its latest milestone, with the launch of the world’s largest community-based mangrove carbon finance conservation initiative in Madagascar in partnership with Blue Ventures.

Under the project—dubbed ‘Tairy Honko’, or ‘preserving mangroves’ in the local Vezo dialect—communities across the Velondriake Locally Managed Marine Area in Madagascar’s remote southwest are uniting to restore and conserve over 1,200 hectares of mangroves.

Together with blue carbon sales in Vanga Bay and Gazi Bay in Kenya, achieved in partnership with the Kenya Marine and Fisheries Research Institute, the Madagascar project represents an expansion of the market for blue carbon offsets by an order of magnitude, with Blue Forests having brought a total 1,500 hectares of mangrove forests to the voluntary carbon market.

“Over 1,500 hectares of mangrove forests are now available on the voluntary carbon market, Lutz says. “With support from the Global Environment Facility and partners, the Blue Forests Project has been able to expand the carbon market for blue carbon offsets by over an order of magnitude.”

“We inherited these mangroves from our ancestors, providing materials we need to survive,” Velondriake Locally Managed Marine Area Association member Joel François says. “I want to ensure we can pass these forests on to our children.”

“Through the Blue Forests Project, we have been able to demonstrate that the carbon market can work to achieve goals in sustainable development and the mitigation of climate change”, Isabelle Vanderbeck says. “Next steps include supporting countries to include blue carbon solutions in national pledges to fulfil the Paris Climate Agreement.”

This piece was originally posted by the UN Environment Programme.