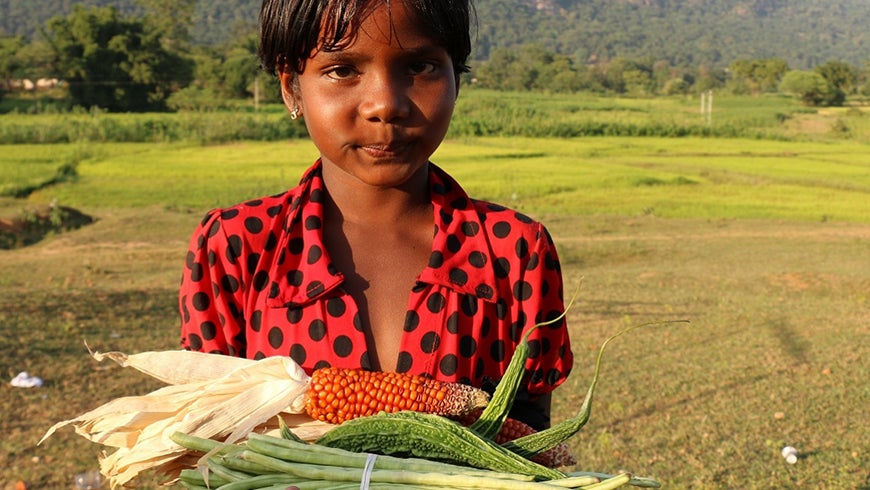 More than 90 percent of rice is produced and consumed in Asia. Prior to the green revolution in the 1960s, India was home to more than 100,000 rice varieties, encompassing a stunning diversity in taste, nutrition, pest-resistance, and crucially in this age of climate change and natural disasters, adaptability to a range of conditions.

Today, much of this biodiversity is irretrievably lost, forced out by the quest for high-yield hybrids and varieties. Nevertheless, a significant number of traditional varieties of rice are still grown by small and marginal farmers across India, where they cater for local consumers’ quality preferences and market niches.

“In these marginal areas, the crop is closely interwoven with tribal culture and is vital in ensuring food security among upland households,” says Rana Jai of the Alliance of Biodiversity International and the International Center for Tropical Agriculture.

In 2005, a group of 20 tribal women farmers from six villages in the Surguja district in India’s central-eastern state of Chhattisgarh, realized the threats to the survival of a traditional rice variety called JeeraPhool, and formed a self-help group to protect and promote it.

JeeraPhool is an indigenous, superfine, aromatic variety of rice. The cumin-like grain is very soft in the mouth and remains flaky even after cooling.

Its popularity gradually increased in local markets. The number of group members grew, and they eventually registered this variety with the Plant Varieties and Farmers’ Rights Authority of India. The group then applied for a geographical indication tag (the JeeraPhool variety is primarily grown only in Surguja district), which was approved in March 2019 for a period of 10 years.

Help from the Global Environment Facility

Since 2005 the area under JeeraPhool has recovered from 120 to 400 hectares and production from 180 metric tons to over 1,000 metric tons in Surguja district.

The success of the JeeraPhool initiative was recognized and adopted by a project funded by the Global Environment Facility, supported by the United Nations Environment Programme (UNEP), and implemented by the Alliance of Biodiveristy International and CIAT and the Indian Council of Agricultural Research.

One of the main aims of the project is to make communities in seven states (Madhya Pradesh, Chhattisgarh, Uttar Pradesh, Rajasthan, Himachal Pradesh, Uttarakhand, Assam) and the Union Territory of Ladakh, more resilient to climate variation as well as food secure by getting them to grow a greater variety of crops.

“Under the project, farmers are being empowered to exercise control over their plant genetic resources—expressed as local crop varieties—as a major asset, and to use this to improve their livelihoods through better farming practices, and aligning market, societal, and conservation goals in product value chains,” says UNEP biodiversity expert Max Zieren.

The project conducted “focal group discussions” and a thorough baseline survey on the present and past existence of 20 crops. It found that several hundred named landraces and farmers’ varieties of the 20 target crops were still being maintained by some farmers.

To help conserve these varieties, 19 community seed banks have been initiated. They currently maintain over 2,000 traditional varieties of different crops. This will provide easier farmer access to a wider variety of seeds.

“Another unique feature of this project is that ex situ collections conserved in India’s National Gene Bank are being repatriated to farmers’ fields,” says Jai. “These include many of the varieties found to have been lost or discontinued in the surveyed communities.”

Under the project over 8,000 farmers have taken part in 43 capacity-building programs.

“I am very happy that through this project our old rice varieties, such as Moochwali Bajri, Pili Bajri, and Sulkhaniya Bajri, are coming back,” says Punja Ram, 55, from Jodhpur, Rajasthan.

“We lost them because we started growing improved varieties, but their taste is not good and they require heavy inputs which we often cannot afford. Our old varieties are very good in cooking and taste. Also, some varieties, such as Moochwali Bajri, are not damaged by birds. And that saves us a lot of time and effort scaring birds away.”

The project also uses sophisticated laboratory analysis for nutrition profiling. This has been done for 205 landraces of rice, 23 of soybean and 26 of millet.

“The cultivation and use of indigenous nutrient-rich varieties will help in addressing the challenges of micronutrient malnutrition at household level,” says Jai.

“Self-help groups have been formed at each project site. These groups are working closely with the public and private sectors. For example, in the Chhattisgarh project site a group 140 women cultivating rice is receiving technical backstopping on value-addition options and product development from a private company and the local agricultural extension center.”

This piece was originally posted by the UN Environment Programme.

Voices from the land: Restoring soil and enriching lives

Shifting the needle on biodiversity conservation in India