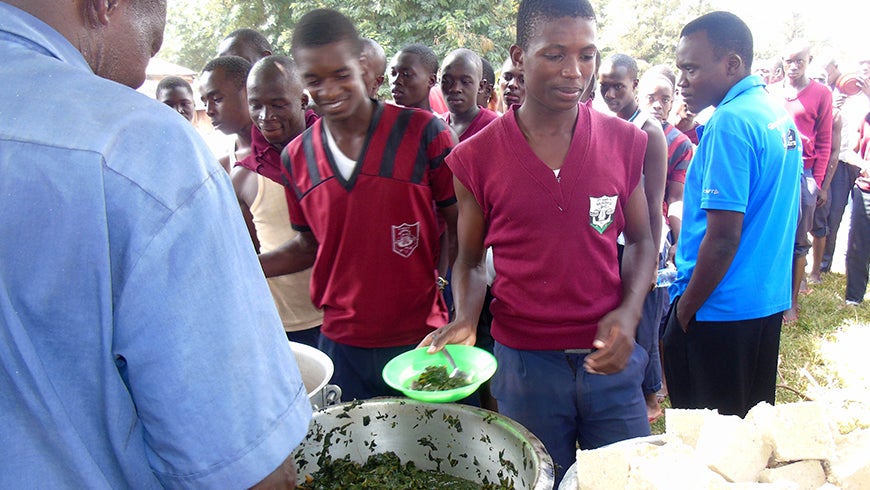 Today, when students file into the lunchroom at Mundika High School in western Kenya, they are greeted by a spread of nutritious local vegetables with exotic-sounding names, like spider plant. But that wasn’t always the case. Just a few years ago, that fare had largely disappeared from Kenyan plates, replaced by cheaper foreign-derived foods, like cabbage and maize meal.

“The first time we introduced indigenous African leafy vegetables in a school meal programme, we didn’t know how the students would respond,” said Aurillia Manjella, an agricultural consultant who helped Mundika High, and several other schools, integrate traditional foods into their menus.

Turns out, she need not have worried. The greens proved to be a hit, at least before the school was closed in March due to the COVID-19 pandemic.

Mundika High School is one of several institutions across Kenya, Brazil, Sri Lanka, and Turkey that have made the switch to local foods with the help of an initiative financed by the Global Environment Facility and jointly led by the United Nations Environment Programme (UNEP) and the Food and Agriculture Organization of the UN (FAO).

Called the Biodiversity for Food and Nutrition Project, its aim is to address the narrowing variety of people's diets at a time when nutritionally-poor processed foods are dominating dinner plates. "This project is an example of how bringing together international and national partners across the agriculture, environment, health, and education sectors can improve ecosystem health and create resilient environments and communities,” said Marieta Sakalian, a senior manager with UNEP.

Globally, three staple crops ­– rice, maize, and wheat – account for more than 50 percent of calories consumed. In many parts of the world, these grains, and some vegetables, have replaced traditional fare because they are cheaper to grow. But local foods are often hardier and more nutritious than their exotic counterparts.

“We wanted to provide the science to show that these indigenous vegetables and fruits are better for you, and are not detrimental to environmental or human health,” said Teresa Borelli, a researcher from the Alliance of Bioversity International and the International Center for Tropical Agriculture, which was part of the nutrition project.

The return of indigenous crops

Project partners focused much of their work in Busia, western Kenya, where both undernutrition and obesity are on the rise, and where many people suffer from deficiencies in zinc, iron, and vitamin A. Yet in home gardens, they found five species of African leafy vegetables that could help address those shortages. For example, amaranth, a green leafy vegetable, contains 200 times more vitamin A and 10 times the iron of a similarly sized portion of cabbage.

“First, we had to create awareness about the nutritional importance of indigenous vegetables and to change perceptions that existed in the community,” explained Manjella. “Some indigenous foods have been used traditionally by healers (and are) associated with the poor, the old, or the ill. People were not interested in them.”

Working with community-based organizations and schools in Busia, communities were trained to cultivate high-quality indigenous vegetables at scale, making them more affordable. Cooking classes were organized, featuring recipes like sautéed cowpea and jute mallow, and schools were assisted to create lessons on the benefits of indigenous foods.

The work led officials in Busia to propose that 30 percent of food procured for schools and hospitals should be locally sourced from family farms. Victor Wasike, Director of Genetic Resources at the Kenya Agricultural Livestock Research Organization, said the regulations are the first of their kind in the country. (The organization participated in the project.)

Data gathered during the project is now being used to inform food policy across Kenya’s 47 counties. “You can see a multiplier effect,” says Wasike, who estimates the project has reached 14,000 people. “This has raised the profile of indigenous vegetables and their use in Kenya overall.”

Manjella, the agricultural consultant, still stays in touch with Mundika secondary school where the new meals have been introduced.

“Malnutrition can lead to short-term and long-term health problems that can affect student performance and their studies,” she says. “This multidimensional project put nutritious, diverse diets on the table, money in farmer’s pockets and (had) benefits for the whole community.”