Knowledge is our strength: Building resilience to flooding in Bosnia and Herzegovina 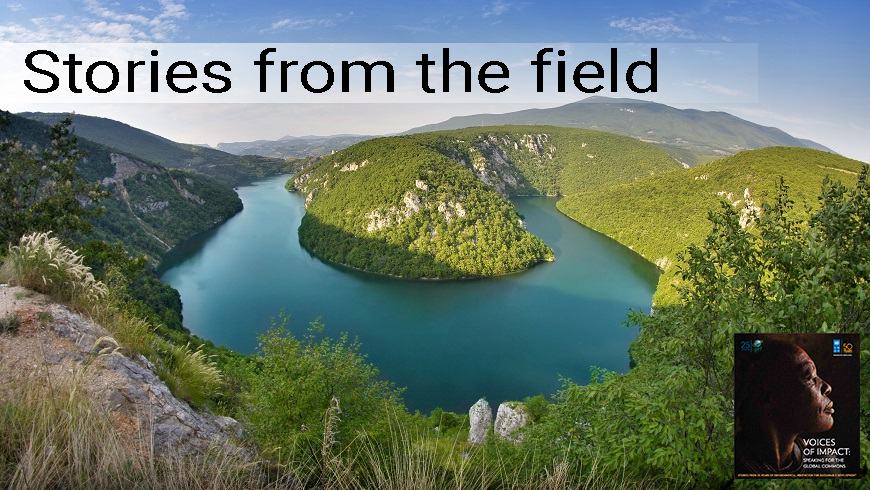 "What these floods did was expose how weak we were. This is why we are so grateful to be involved in the flood management project that the GEF and UNDP are supporting in the Vrbas River Basin "

“We experienced severe floods twice in 2014. In the first flood in May, the water started flowing at night and the flood reached its peak in the early hours of the morning. People tried to move everything to the upper storeys of their homes, but the water level rose so high that it did not really help. Our emergency services did their best to evacuate people, but the people didn’t want to leave their homes – they had no idea how bad the flood would become. Also, our Fire Brigade and Police did not have proper training for such situations. These floods damaged homes, the school and other public infrastructure and many people lost their possessions – the cost of the damage exceeded the entire year’s budget of the Municipality!

In August, the floods were devastating, worse than anything ever recorded before – none of the older citizens here can recall any flood that was ever this bad. The floods seem to be getting worse and more frequent here in Celinac – before, floods came every 10 to 15 years but now they are happening about every five years, and they are much more intense. In the August flood, the greater part of this municipality was destroyed – there were landslides, buildings and roads were extensively damaged, industries were lost, and, in the rural areas, agricultural lands were destroyed – a terrible thing, because those communities are poverty stricken and many of them previously suffered terrible hardship in the War. The worst thing for me to witness with this flood was the loss of human lives.

We were totally unprepared and had no equipment or plan for how to deal with this. Things were made worse by the fact that poor planning and ignorance meant that buildings had been erected along river banks where they could not be protected. I remember being so frightened – we had no communications, no road connections, no water, no food, the electricity substation was underwater, the city bridge was washed away, people’s homes were flooded and their belongings ruined. We were completely cut off from everything. My Director and I went on an inspection round late on the night the floods hit – it was totally dark, there were no people around, just destruction everywhere and the roar of water. We wondered then if the city would ever recover.

What these floods did was expose how weak we were. This is why we are so grateful to be involved in the flood management project that the GEF and UNDP are supporting in the Vrbas River Basin – I co-ordinate the Municipal Working Group for this project. The first thing we have done is to undertake a socio-economic analysis and mapping exercise to identify risk zones. This forms an important part of our developing emergency response plans, and training in flood-specific civil protection. The Early Warning Systems the project is installing will also mean that we are never caught unprepared again. Hydrological equipment for monitoring, assessing and forecasting flood risks is also being upgraded. At the Hydro-Meteo Institute, they have gone from having no automatic hydrological stations to having the best data collection, analysis and distribution systems in the country. Community training for flood-preparedness will also be important as in the earlier floods people made the situation worse because they did not know what to do.

Before, ‘Civil Protection’ and ‘Adaptation to Climate Change’ were just ideas on paper – we had no information, no plans, no equipment and no capacity. One of the greatest contributions this project has made so far is that it has given us knowledge. And that gives us the power to protect ourselves, our homes, and our livelihoods.”

MR MIROSLAV BABIC lives in the town of Celinac, which straddles the Vrbanja River (a tributary of the Vrbas), in north-west Srpska, Bosnia and Herzegovina. Born and educated in the nearby city of Banja Luka, he studied economics at university, before relocating to Celinac, where he is now employed by the Department of Economy in Celinac Municipality. He serves on the Emergency Situations Committee and Civil Protection Unit and is responsible for disaster management.

Bosnia and Herzegovina is still recovering from the devastating effects of the 1992 – 1995 war. It faces significant threats from climate change, but has limited capacity to address and adapt to negative impacts, such as the increased frequency and magnitude of floods. These impacts have the most severe effect on the vulnerable communities within river basins, and economic sectors such as agriculture and energy generation (hydropower).

The Vrbas River basin is characterized by a large rural population comprising the poorest and most vulnerable communities, including war returnees and displaced people who have suffered successive deprivations due to conflicts in the region. They are now also faced with high exposure to flooding and its devastating impacts. In May 2014, Bosnia and Herzegovina experienced its worst flooding in 150 years, which resulted in 23 deaths and billions of dollars worth of damage equivalent to 15 percent of GDP, with serious economic ramifications.

Working closely with state, local government and other institutions, the project will enable strategic management of flood risk through the legislative and policy framework, and appropriate sectoral policies and plans that incorporate climate change considerations. This project forms part of a broader programme of work funded through the GEF to address similar climaterelated risks in the greater Balkans and Caucasus regions.