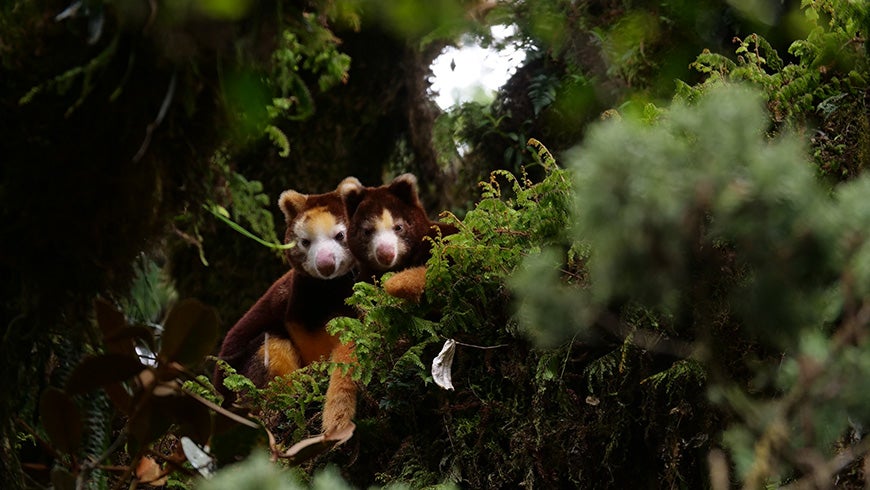 Sought after for subsistence-based hunting, as part of rural communities’ diets for centuries, the critically endangered tree kangaroos have been hunted almost to extinction, but now local communities and conservation groups are fighting together to save them. In the subsequent decade, the TKCP and the YUS Conservation Area have become a national model for conservation within the unique context of PNG’s customary land tenure system. Photo: Jonathan Byers/TKCP.

"I thought everything was in order. I exploited my natural resources just as my father did, and his father before him. I paid little attention to what was actually left in the forest," Danny James, Komareng village, Yopno-Uruwa-Som.

Sought after for subsistence-based hunting, as part of rural communities’ diets for centuries, the critically endangered tree kangaroos have been hunted almost to extinction, but now local communities and conservation groups are fighting together to save them.

Tree kangaroos are found only in the rainforests of Australia, West Papua, and Papua New Guinea (PNG). Looking like a cross between a kangaroo and a lemur, they have adapted to life in the trees, with shorter hind legs and stronger forelimbs for climbing. Despite weighing up to 16kg, tree kangaroos are remarkably elusive, and often invisible high in the forest canopy.

In Papua New Guinea, tree kangaroos are the flagship species for the rare cloud forests – a high elevation rainforest characterised by low-level cloud cover. As a flagship species, the health of the tree kangaroo reflects the health of their wider ecosystem. By focusing on and achieving conservation of the tree kangaroo, the status of many other species that share its habitat – or are vulnerable to the same threats - may also be improved.

Found from the western side of Papua New Guinea to the eastern coast of the Huon Peninsula, many of the 14 known tree kangaroo species call PNG home, living in some of the last undisturbed rain forest habitat in the world.

Papua New Guinea is a cultural and biodiversity hotspot. It has nearly 1,000 indigenous tribal groups who speak more than 850 different languages, accounting for nearly 12 percent of all existing languages on earth.

Despite its relatively small land area, Papua New Guinea is estimated to contain between five and ten percent of all floral and faunal diversity in the world.

Working in some of the most remote corners of the planet, local and indigenous communities are advancing innovative sustainable development solutions that work for people and for nature.

Under PNG’s unique land tenure system, more than 90% of all land in the country is held and controlled by customary landowners. As such, the sustainability of conservation efforts depends upon the commitment of local tribes and clans.

In these remote, difficult to access places, work in PNG to save the tree kangaroos is fundamentally about empowering local environmental stewards.

Papua New Guinea’s Huon Peninsula is an extremely rugged mountainous area rising from the famed coral triangle to 4,000-metre peaks, and is blanketed by one of the world’s largest remaining cloud forests.

The peninsula’s Yopno-Uruwa-Som (YUS) region is dotted with 50 remote villages, home to 15,000 people who, under PNG’s customary land tenure system, collectively own and control their entire 1,600km2 landscape.

Rural communities in PNG live a primarily subsistence lifestyle, relying on their natural resources and fertile soil as their ancestors did for generations before them. However, community leaders in YUS noticed worrying challenges that previous generations had never experienced: important resources were becoming scarce.

"Our hunters had to travel longer distances to find animals in the forest. Sometimes we had to hunt in areas belonging to other clans without their consent because we could not find enough in our traditional land to feed our families" says Matthew Tombe, Isan village, YUS.

The landowners of YUS were determined to find a lasting solution and, in 1996, met Dr Lisa Dabek, a conservation biologist studying the endangered Matschie’s tree kangaroo – endemic to the Huon Peninsula. Despite diverse perspectives and interests, they discovered a common objective: protecting the Matschie’s tree kangaroo and its habitat. With this partnership, the Tree Kangaroo Conservation Program (TKCP) was born.

Over the years that followed, the YUS landowners - inspired by respected landowner Mambawe Manaono of Kumbul village – traversed their landscape to advocate for conservation and sustainable use of their forest for the well-being of future generations. Together with TKCP, the landowners had an ambitious goal: collecting land pledges from dozens of clans across YUS and creating the country’s first nationally recognised Conservation Area.

In 2009, with more than 78,000 hectares of land pledged, their goal was achieved and the YUS Conservation Area was established.

"With the creation of the YUS Conservation Area and the support for conservation throughout YUS, I am seeing a huge change. I am seeing animals just on the edges of the villages, the gardens and even within village boundaries. More and more YUS villages are pledging areas of their customary land for conservation so that they can contribute and benefit from these changes as well," Matthew Tombe, Isan Village, YUS.

In the subsequent decade, the TKCP and the YUS Conservation Area have become a national model for conservation within the unique context of PNG’s customary land tenure system.

With funding from the Global Environment Facility and UNDP support, TKCP is building the capacity of local communities and other stakeholders to manage the YUS Conservation Area.

"I can see young people in YUS are beginning to realise their role in the community as future leaders. Likewise, the broader community has shown their appreciation for youth interest in upholding cultural values in connection with the YUS environment," notes Gibson Gala, TKCP Education & Leadership Coordinator.

The YUS Conservation Area is working – the forests and ecosystem are healthy, and key species like the Matschie’s tree kangaroo are thriving in the protected areas. The people of YUS are also benefitting from their actions, which have brought substantial improvements to local livelihoods as well as new opportunities for education and health. Now a team of local YUS Conservation Area Rangers monitors the protected area on a monthly basis.

"Our clans have lived here for generations – we are a part of the landscape. I think that what we are doing here shows that we can play an important role in conservation.” Nomis Simon, Singorokai village, YUS.

Elsewhere in PNG, in the southern foothills of the Torricelli Mountain Range in Sandaun Province, complementary efforts are underway to save their own region’s species of tree kangaroo.

Before passing in 2017, the late Caspar Wakien of Wilbeite village remembered seeing Tenkile tree kangaroos around his village as a boy growing up in the 1940s.

Long absent from the village, and on the brink of extinction in 2001 with a population estimated at fewer than 100 individuals, the Tenkile Conservation Alliance (TCA) was established to save the Critically Endangered Tenkile tree kangaroo (Dendrolagus scottae).

In 2004, TCA discovered the Weimang tree kangaroo (D. pulcherrimus) still existed in a few fragments of its former distribution, and expanded their activities to include both species of Critically Endangered tree kangaroos.

Turning hunters into conservationists and stewards of their unique ecosystem, and signing on many villages in order to establish the proposed Torricelli Mountain Range Conservation Area (TMRCA) has meant many key species – and crucial biodiversity in the Torricellis – are now being protected.

Before passing in 2017, the late Caspar Wakien of Wilbeite village, said "This is the best work I’ve seen with TCA and its partners. Now even the government are here to help. I now know my Tenkile will be seen by future generations after I leave."

All five of the Local Level Governments within the proposed TMRCA and the Sandaun Provincial Government signed resolutions in support of its establishment.

TCA staff have been trained with new GPS units resulting in improved mapping of land boundaries of the proposed TMRCA. All 50 villages have sketch maps of their land delineating no-go zones, or Special Management Areas, as well as sites for cash crops, gardens, and village areas. Satellite imagery is being utilised by TCA staff and CAM committees as they designate and expand existing protected area boundaries so that the needs of surrounding ecosystems and the communities are both fully realised. 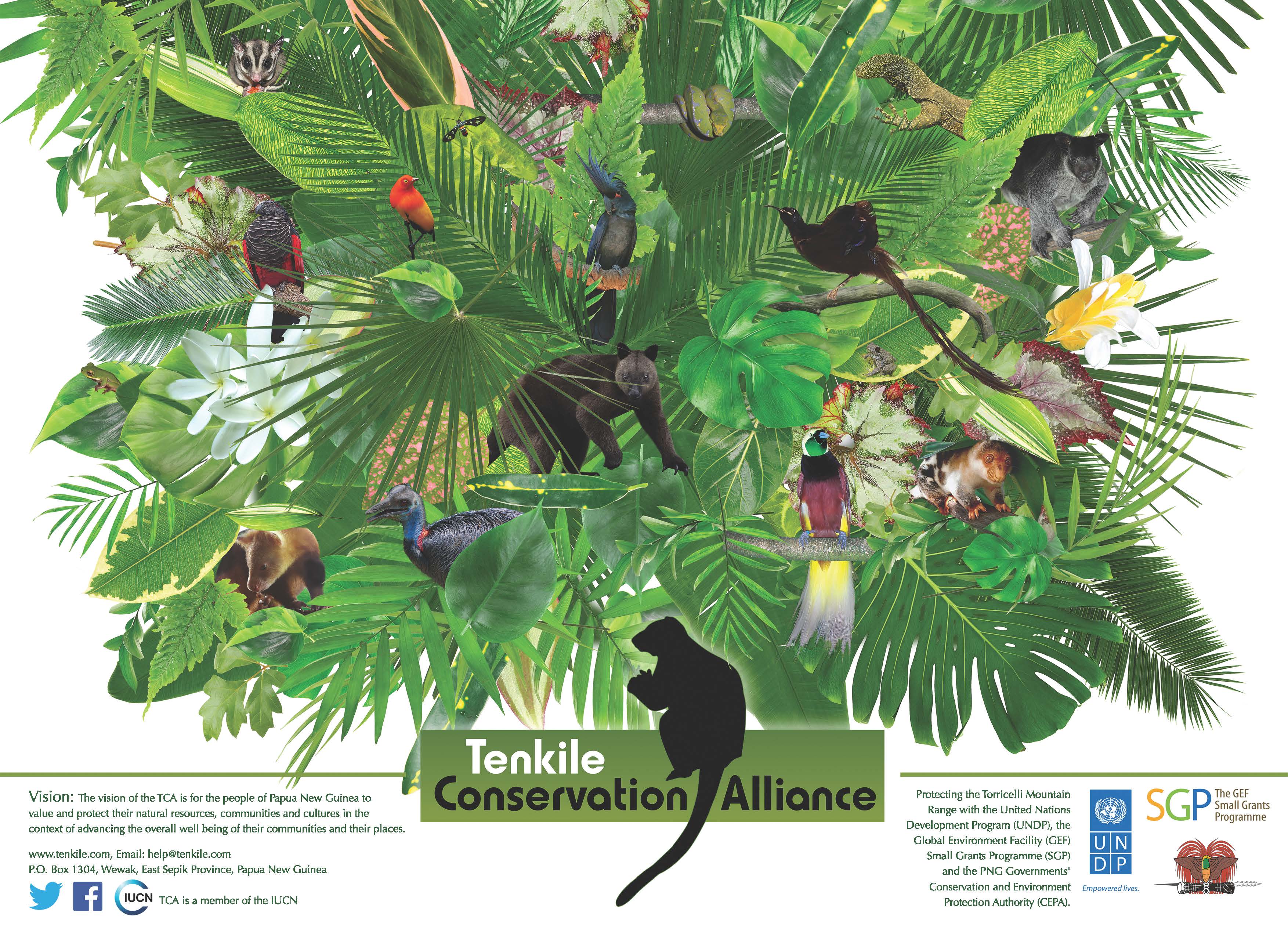 Caspar’s work is now bearing fruit: this year marks the first time that the Tenkile tree kangaroo is now reappearing in areas where it hadn’t been seen in living memory.

As of April 2019, there have been two reports of Tenkile found close to the villages. Jim Thomas, CEO of TCA, remarks on the significance,

‘It's answering a question I have often been asked – “How will you know if the Tenkile is recovering?” My response has always been “When the Tenkile is being seen near the villages, as it was 70 years ago.” Incredible that this is now starting to happen…This is just great and has made a tremendous difference to the attitudes of all of our stakeholders - they believe in conservation. This has been the “eye-water” moment for us - hearing this across the 50 villages.’

This partnership has been pivotal in increasing the landowners’ and communities’ natural resource management effectiveness, along with their commitment to safeguarding the proposed TMRCA with the Conservation & Environment Protection Authority of the PNG Government.

With nearly one million species at risk of becoming extinct within decades, we need radical action.

We need transformative partnerships that recognise the universal importance of biodiversity – the diversity within species, between species and of ecosystems. Coordinated action must stop the extinction of species like the tree kangaroo, and reduce biodiversity loss.

The work of the Tree Kangaroo Conservation Program on the Huon Peninsula - and particularly in the YUS Conservation Area to save Matschie’s tree kangaroo, coupled with the work of TCA in the Torricelli Mountain Range to save the Tenkile and Weimang tree kangaroo species are the best chances we have for saving these unique, flagship species, so important to their ecosystems.

This story was originally published on Exposure by UNDP Ecosystems & Biodiversity.