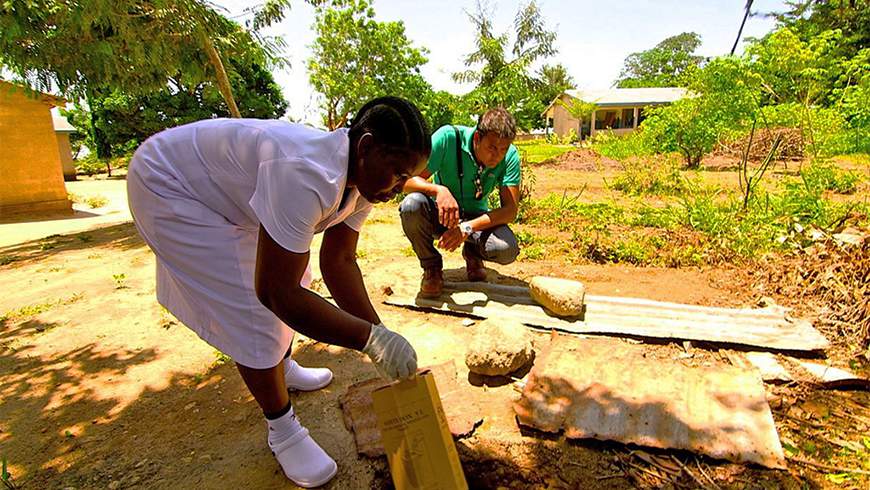 Ester Mbelle, a nurse at a rural clinic in Tanzania, shows how they dispose of sharp and infectious wastes by packing it into cardboard boxes and disposing of it in a hole dug in the ground. Due to funding constraints, this rural healthcare clinic has no treatment options for infectious healthcare waste.

The Comprehensive Community Based Rehabilitation in Tanzania (CCBRT) is one of the few hospitals that provides disability and rehabilitation services to the country’s indigenous population.

Healthcare facilities like CCBRT aim to improve the health of their patients, but they can also be a source of pollution and health hazards that have the potential to put staff, patients, and surrounding communities at risk if the waste from the facility is not properly handled. One of those risks is posed by infectious waste, which can spread diseases like Hepatitis B, Hepatitis C, and HIV to anyone who comes in contact with the waste and handles it improperly. This is a major challenge for many healthcare facilities.

For some healthcare facilities across sub-Saharan Africa and in many parts of the world, it is often too costly to install and operate any kind of sanitary treatment, much less the right type of equipment to dispose of infectious waste in a socially and environmentally safe manner. Often, facilities dispose of such waste by burying it, throwing it out alongside household waste, openly burning it, or using low-tech incinerators that produce significant pollution, as is the case at CCRBRT. Improper methods of medical waste disposal, such as those listed above, can unintentionally create persistent organic pollutants (POPs) through chemical reactions that occur when the waste is not burnt at the right temperature. This can impact the health of individuals staying or working at the facility, as well as those living both nearby and far away. 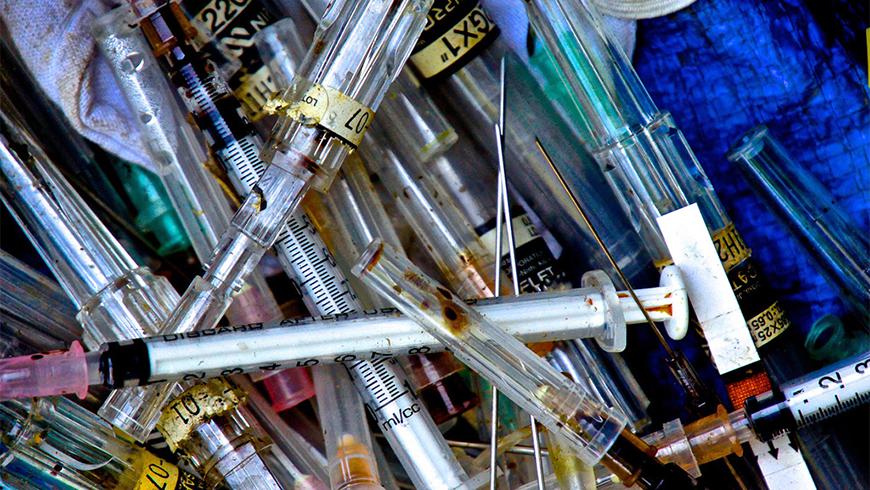 To help facilities like CCBRT get access to safe solutions for medical waste disposal, a component of a GEF-funded UNDP/WHO/Health Care Without Harm project has provided assistance. The project’s goal was to design cost-effective, simple, and locally produced technologies. One type of disposal technology that was produced in partnership with the University of Dar-es-Salaam is known as an autoclave. Professor Emrod Elisante, who is part of the University’s technologies design team, says, “We’re very proud of the autoclave technology and associated equipment that the project has been able to design and build with GEF support, and we’re sure it’s going to help a lot of people.”

To test the technologies, CCBRT has received an autoclave and waste compactor that were manufactured in Tanzania along with reusable waste containers which were produced by a local artisan. Since the new technology has been installed, CCBRT staff have been trained in its use, and now rely less on the polluting incinerators installed on the hospital premises. CCBRT is hopeful that when the autoclave technology has been fully tested, it can replace the use of the incinerators altogether and serve as an example to other facilities.

As an additional benefit, training on good waste management practices in the hospital has contributed to a reduction in the spread of infections. The patients of CCBRT will receive even better care in the future, knowing that waste issues will not jeopardize their health. 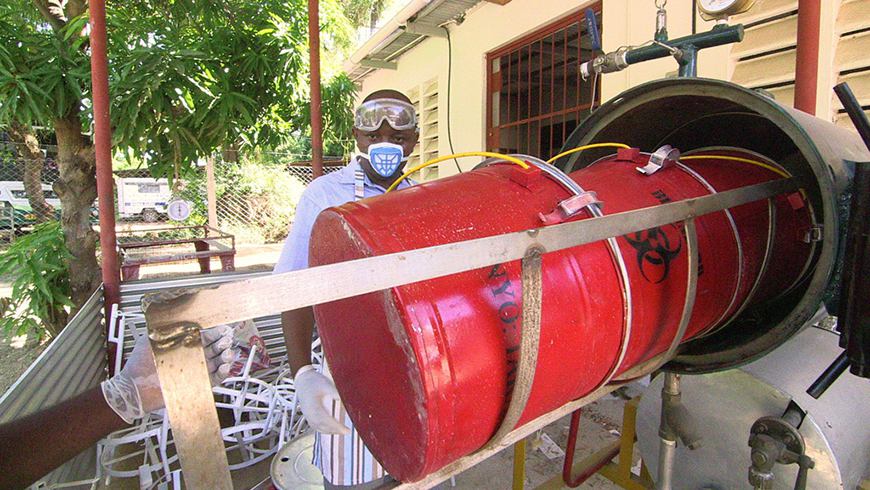 Projects such as these are important to the work of the GEF in providing safe and clean environments where the impact of waste from healthcare and other sectors are both minimized and treated properly to prevent impacts on the health of people and communities.

Since the implementation of this project, the Ebola outbreak of 2014 in West Africa occurred. The technology developed by this project has been scaled-up and mass-produced in South Africa and was deployed to effectively deal with the waste resulting from healthcare facilities dealing with this serious health crisis. The availability of this technology not only provided an affordable method to dealing with this waste but also one that did not impact the global environment.

This story is based on an article that first appeared in GEF's 'The Greenline' magazine.

The GEF is a catalyst for both governments and the private sector to help eliminate or reduce harmful chemicals and waste. The GEF is a financial mechanism to implement both the Stockholm Convention on Persistent Organic Pollutants and The Minamata Convention on Mercury. It also plays an important, complementary role in achieving the Montreal Protocol on Substances that Deplete the Ozone Layer.

The GEF has two key strategic objectives around chemicals and waste: