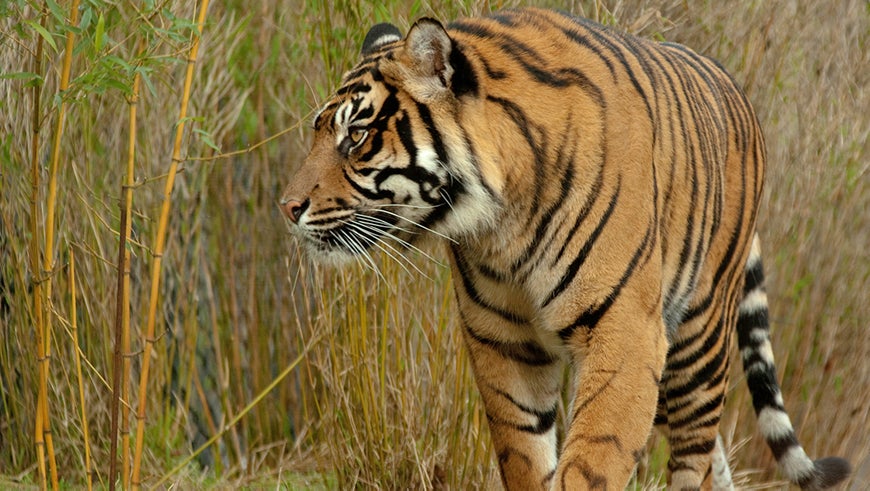 An auspicious symbol of strength, health, and protection, the tiger features prominently in art, folklore, myth, and literature around the world. Tigers are also an important top predator, a critical piece holding together the complex puzzle of natural systems across more than a dozen countries in Asia.

Despite the essential role tigers play ecologically, culturally, and in our imaginations, they continue to be in danger. We have lost over 95 percent of the world’s wild tiger population in the past century — from an estimated 100,000 wild tigers in 1900 to an estimated 3,900 in the wild today.

The Global Environment Facility (GEF) has been a leading supporter of the world’s efforts to conserve and protect this iconic species. Global Tiger Day on July 29th is an opportunity to learn more about tigers and the work the GEF supports to protect them.

In 2018, the Jakarta Post reported that a male Sumatran tiger had been killed with spears in Hatupangan village in North Sumatra province. The tiger’s disembowelled body had been hung from the village hall’s ceiling.

‘The tiger was sleeping under a resident’s stilt house when the people struck him repeatedly in the abdomen with a spear,’ said Batang Natal subdistrict head Lion Muslim Nasution.

‘We had talked to them [the residents], even involving the National Army officers, but they still won’t listen to us,’ she said at the time.

The Sumatran tiger population currently stands at no more than 600, according to the official estimate from the Environment and Forestry Ministry.

A recent report in Nature Communications estimated tiger population densities were 47% higher in primary versus degraded forests and, encouragingly, increased 4.9% per annum from 1996 to 2014, likely indicating a recovery from earlier poaching.

However, while tiger numbers may have temporarily risen, the total carrying capacity for tigers on the island declined by 16.6% from 2000 to 2012 due to forest loss and degradation.

Also of concern: tiger subpopulations are significantly more fragmented now, which decreases opportunities for tigers to mate and thrive.

Human-wildlife conflict (HWC) occurs when animals pose a direct and recurring threat to the livelihood or safety of people, leading to assaults on a particular species. When locals perceive livestock or income losses as stemming from particular wildlife, retaliation against the species blamed often ensues.

HWC is one of the most pressing threats to biodiversity conservation and sustainable development. These conflicts threaten the healthy co-existence of people and wildlife and undermine conservation efforts. Collaboration across disciplines and sectors is needed to address HWC worldwide.

In Sumatra, human-wildlife conflict has become part of daily existence for locals. Conflict with tigers occurs most frequently in locations where tiger habitat has been disrupted by land use change and deforestation.

While we venerate tigers for their beauty, power, and mystique, the farmers who share the landscape with these fearsome cats often see tigers as a deadly threat.

Human death or injury from tiger attack in Sumatra reached 184 cases between 2001-2016. Within that same period, 1,247 families lost livestock to tiger predation.

Recognizing that building sustainable livelihoods is critical for saving the Sumatran tiger, the UNDP-supported, GEF-financed Sumatran Tiger project partners with villages to prevent human-wildlife conflict. The project, officially called Transforming Effectiveness of Biodiversity Conservation in Priority Sumatran Landscapes, is executed by the Ministry of Environment and Forestry.

The above tragic tiger incident happened in an area surrounded by three deteriorating Sumatran tiger habitats in North Sumatra province.

In an effort to ameliorate the situation, and based on a recent study by Forum HarimauKita, Sumatra recognized 14 managed tiger landscapes and 19 neglected landscapes in Sumatra.

Existing on the knife-edge of extinction, the Sumatran tiger draws the eyes of the world to Indonesia’s tiger habitat. Scientists and poachers alike keenly search the dwindling rainforest for signs of the big cat, the last remaining island-dwelling sub-species of tiger since the Bali tiger and the Javan tiger passed into extinction within living memory.

The Sumatran Tiger project nurtures partnerships that can transform the effectiveness of biodiversity conservation in priority Sumatran landscapes.

Activities in managed landscapes are defined by the availability of resource investments (in terms of programming and funding) to specifically implement Sumatran tiger conservation initiatives; not only mitigating HWCs but monitoring and patrolling to protect this critically endangered sub-species.

These resource investments are frequently absent in the neglected landscapes. That’s why efforts like this are critical.

To mitigate human and tiger conflict, the project worked in four (of 14) Sumatran tiger managed landscapes; all four successful interventions were located within national parks.

The project supports a co-ordinated approach by partnering with Forum HarimauKita (Sumatran Tiger Forum) to harness their invaluable local expertise, working in conjunction with the Indonesian Ministry of Environment and Forestry to save this majestic species.

The Sumatran Tiger project is all about a step toward security and improved well-being for people and a step back from extinction for tigers.

The project team understands that it is imperative to safeguard the livelihoods of local citizens as they work toward increased well-being.

This partnership is already bearing fruit, as NGOs, government agencies and local citizens work alongside one another to co-ordinate activities, share knowledge, and live out a commitment to preserve healthy, functioning ecosystems across Sumatra.