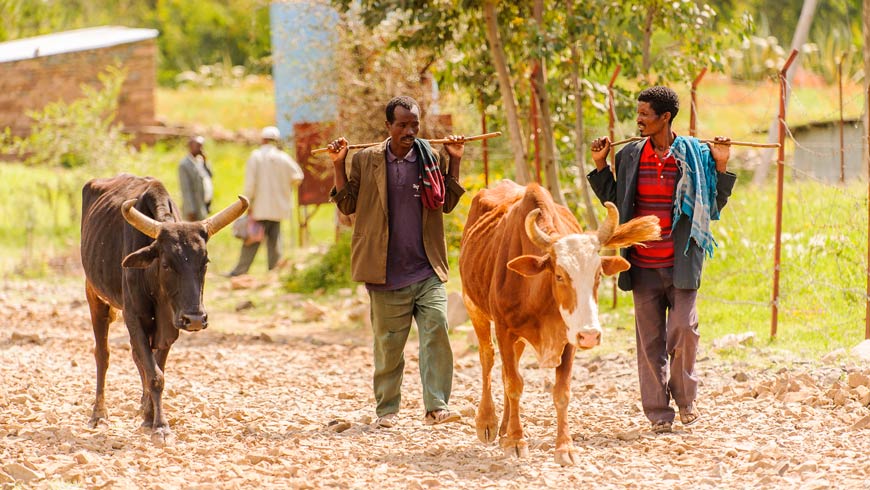 Around the world, an estimated two billion hectares of land – an area larger than South America – could be rehabilitated. Restoring it would boost food production and incomes, tackle climate change by sequestering vast amounts of carbon, and even reduce conflict. And Ethiopia – once seen as desperate – is proving to be a pioneer.

Not long ago, Ethiopia was known for drought and famine. But now it is gaining an increasing international reputation for revitalising its land and growing more food. It is pioneering measures to reverse the degradation, which  affects one third of the world's agricultural land.

Parts of the country are already greener than at any time in the last century and a half, and its Prime Minister, Hailemariam Dessalegn has committed to the ambitious target of restoring 15 million hectares of degraded and deforested land – an area greater than the size of Bangladesh – to productivity by 2025.

The Global Environment Facility (GEF) is helping to finance Ethiopia's Sustainable Land Management Programme (SLMP), which stretches across 135 major watersheds across the country, increasing vegetation and water supplies and boosting food production and incomes. So far it has provided over $26 million towards the budget of the project, which will run until 2023. It is increasing its efforts to promote food security, and the country is one of those participating in a GEF project pioneering a holistic integrated approach to doing this, while tackling land degradation.

Ethiopia has practised measures to conserve soil and water for centuries – they are believed to have first been used during the Akumsite Kingdom, which reached its height from the third to the 6th century of the Christian era. But in more recent history 97 per cent of its original forests were cut down, helping to cause serious soil erosion.

By the 1980s, the Food and Agriculture Organization estimated some 1.9 billion tonnes of soil were being lost every year. This degradation, compounded by drought, helped cause the notorious famine of 1984-5, in which nearly a million people died.

Less well known is that, since shortly after the famine, Ethiopia has been intensifying work on soil and water conservation, culminating in the SLMP, which was launched a decade ago. It has terraced hillsides, constructed bunds to collect rainwater and allow it to seep into the soil, lightly dammed gullies, planted trees and practised climate-smart agriculture through composting, managing landscapes, and agroforestry - among other measures.

Between January 2009 and July 2017 the programme brought 575,781 hectares of land under sustainable landscape management or climate-smart agricultural practices in the 135 watersheds, stretching across six of the country's regional states. Vegetation cover has increased, water sources have revived, agricultural yields have increased and 2.7 million tonnes of carbon dioxide are estimated to have been drawn from the atmosphere by the new trees and plants, thus helping to combat climate change.

Besides increasing crop yields, and the greater prosperity they bring, some 150,000 people are taking part in income-generating activities supported by the project. And 15,000 landless young people have been given land in exchange for their work, using it to boost their livelihoods through, for example, keeping bees – in some cases multiplying their incomes tenfold. And over 5000 community-based institutions, self-help groups and associations have been set up, and still function.

Million Alemayehuw Gizawof the World Bank, the GEF's implementing agency for the project, describes the result as a “transformation”.  He says: “After two or three years you see green hillsides which become productive and support the livelihoods of the rural people. It's making a difference; the impact is really great.

“Moisture in the soil has increased. Grazing areas are coming back and yields are improving. You can see clear differences in crop production.  There is a problem due to the shortage of farmlands, but with our project the rehabilitated hillsides now are used by the rural poor, particularly the landless youth. I am very optimistic that this is going to be scaled up in different parts of the country.”

Debasu Bayleegn Eyasu, Communication Director at Ethiopia's Ministry of the Environment, adds: “Agriculture is the backbone of our economy. So, land degradation for us means the degradation of our economy. SLMP, supplemented by social moblisation and the commitment of the government,  will benefit us by recovering those degraded lands in a short period of time.”

He adds that recovering the land “changes people's lives” by increasing their incomes, as increased water supplies make it possible to farm outside the rainy season, and the land becomes more productive. It also reduces the floods which used to come from water running off the degraded land. And it helps Ethiopia's energy supplies, almost 90 per cent of which come from hydroelectric dams which depend on a sustainable water flow.

And Josef Buys, Attache at the Belgian Ministry of Foreign Affairs, said he found that villagers in the province of Tigray – where over 56,400 hectares of land have been brought under sustainable land management and climate-smart agriculture since 2009 –  could now sustain themselves and had more of a sense of community.

“The women said; 'we are still busy, but for a good life. Before we were busy for a poor one'. And the priest said; 'Now I have a crowd to preach to, because they come together'.

“I think that the GEF is definitely on the right path, because the work is good.  I have been talking with the people and they really have much better lives. And at the same time the global environment is being restored.”

Around the world, an estimated two billion hectares – an area larger than South America – could be rehabilitated. Restoring it would boost food production and incomes, tackle climate change by sequestering vast amounts of carbon, and even reduce conflict since most of the world's clashes occur over scarce resources in its drylands. And Ethiopia – once seen as desperate – is proving to be a pioneer.

This article draws on interviews in the GEF film Our Global Commons: Sustainable Land Management.