The power of peat: Restoring ecosystem health to peatlands in Belarus 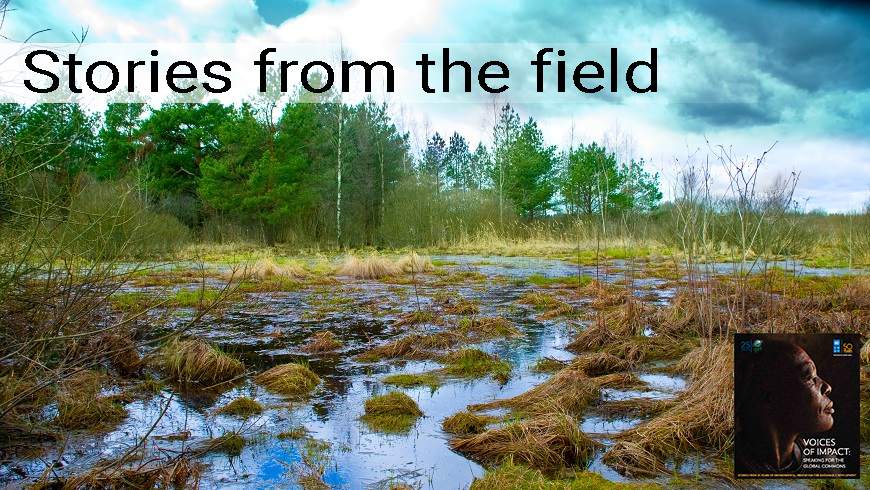 "At the most fundamental level, this work has drastically changed attitudes towards peatlands, at all levels: local communities are now proud that people from all over the world come to see their beautiful mires, and they have regained lands for cranberry-picking and fishing"

“Belarus used to be described as the ‘land of mires’ . My childhood was spent surrounded on all sides by mires (peatlands) and woods . As a young boy, I would go hunting with my father and older brother, and cranberry-picking with my mother and the women from the village . These formative years spent in the countryside determined my choice of path in life. After leaving school, I went to Minsk, where I enrolled at the biology faculty of the university. My first interest was in waterfowl and it was through this that I became interested in wetlands and peatlands

In the 1990s, we observed a decline in the number of many waterfowl species . Our research showed that this was correlated with the degradation of mire ecosystems, resulting from various human-induced disturbances (such as draining, peat extraction, peat fires and infestation by invasive alien plants) . The deterioration in the ecological condition of these habitats was made worse by the increased frequency of hot, dry winds, which previously were unheard of in Belarus . In 1999 and 2002, major peat fires broke out, and a considerable part of the country was blanketed in smoke – which contained millions of tons of CO2 that had been locked up in the peat deposits . We initiated a pilot study to investigate the causes of these catastrophic peat fires and submitted the data to Government to motivate for a full-scale assessment of the state of Belarusian peat - lands . Our data confirmed that the fires were happening due to large-scale disturbance of the hydrological regime of these ecosystems – industrial-scale extraction of peat (for fuel) in the past had led to drainage of just over 50 percent of our peatlands, leaving a mere 34 percent of them in their natural state . There was also increasing pressure to allocate new land – even in protected areas – for peat extraction . Extensive areas of worked-out peat deposits lay abandoned, increasing the risk of peat fires . Our research demonstrated clearly the urgent need to take prompt action to restore the ecological integrity of these degraded mires – not only to conserve biodiversity, but to reduce carbon emissions and for the broader benefit of the people of our country

Having a solid body of research behind us, and the commitment of government to take action to prevent peat fires, paved the way for the development of succes - sive projects to deal with different aspects of peatland restoration . The first of these projects, which started in 2004, addressed the practical aspects of peatland restoration, and produced a strategy for the sustainable use of peatland resources, supported by an appropriate regula - tory framework . We restored the hydrological regime of over 20 peatlands (covering up to some 40,000 ha), which put an end to the fires.

The impact of this was that the authorities, and people in general, realised that re-wetting is one of the most efficient ways to combat the peat fires, which had presented a great risk to people’s health and property, and cost the Government a lot of money. As a result, the national Council of Ministers adopted the Strategy for Sustain - able Use and Categorisation of Peatlands, which was developed with detailed inputs from a team of technical experts, and representatives of various institutions respon - sible for protection or use of peatlands . This represented a significant change in government thinking, and different sectors were working together to come up with solutions.

On a professional level, these projects enabled us as scientists to develop and put into practice innovative, cutting-edge, ecosystem-based approaches and methods for the conservation and sustainable use of peatlands – ideas which previously we could only plan in theory. We now share our experience and expertise at conferences and workshops, and influence peatland management in other countries, such as Russia, Ukraine, and Lithuania . We have improved the expertise of our professionals in nature conservation, and working as an environmental specialist is now viewed as a prestigious job .

At the most fundamental level, this work has drastically changed attitudes towards peatlands, at all levels: local communities are now proud that people from all over the world come to see their beautiful mires, and they have regained lands for cranberry-picking and fishing – with the added income-generating opportunities these activities bring; government agencies support the campaign for re-wetting peatlands and placing more mires under formal protection; and the peat-extraction sector has changed how it approaches its business . The fact that the Government has supported the proposal to draft a law on the sustainable use of peatlands, shows how much attitudes have shifted.

Bringing about this scale of change and finding sustainable solutions to an issue as complex as restoration of peatlands, cannot really take place within a short period of four years. Fortunately, GEF did not stop its support for work on Belarusian peatlands after the first pilot project was completed. Further investments as part of a second, larger-scale project, have made it possible to sustain and multiply the transformation that can be achieved when there is a change in the knowledge, attitudes and approaches of the professionals in the sector, government, industry role players, and the public.

When I started this work, it was my dream that Belarus can again become the ’land of mires’, with benefits for our people, our biodiversity and climate. It is extremely satisfying for me to see that dream becoming a reality.”

DR ALEXANDER KOZULIN grew up in the small village of Haradnaja (Gorodnaya) in the Belarusian Paliessie (Polessie), an area rich in peatlands. He is the Head of the International Cooperation Division of the National Centre for Bioresources, and a Senior Research Associate in the Institute of Zoology, at the Academy of Sciences of Belarus, where he has worked since 1978.

Peatlands cover some 2,560,000 ha (12.3 percent of the land surface) in Belarus and are of both national and global importance. The pristine mires preserved in Belarus (covering 863,000 ha) remove approximately 900,000 tons of carbon dioxide and release 630,000 tons of oxygen into the atmosphere every year. About 500 million tons of carbon are accumulated and kept in the mires of Belarus. These mires also provide habitats for rare and endangered wildlife species, such as aquatic warblers, greater spotted eagles, and great snipe, and perform critical ecosystem services relating to the hydrological cycle.

Peat fires and the unsustainable use of peatlands cause the release of 16.7 million tons of CO2 into the atmosphere (4.45 million tons of carbon) per year, making Belarus one of the leading hotspots of greenhouse gas emissions from drained peatlands. The re-wetting of degraded peatlands, as developed by Dr Kozulin and his team, can prevent these emissions.

Over the past 10 years, UNDP and the GEF have supported the Government of Belarus in the implementation of two projects focused on peatlands, supplemented by a number of Small Grants projects. The first full-size project dealt with re-wetting of degraded peatlands, and the development of a strategy and regulatory framework for sustainable management of these ecosystems. The second is implementing a landscape approach to managing peatlands for multiple ecological, biodiversity, climate and social benefits. During the lifetime of the second project, a major achievement was the approval by the Council of Ministers of the Peatlands Strategy, preventing any future loss of peatlands, allowing peat extraction only where no biodiversity loss will be caused, and requiring mandatory rehabilitation where extraction does occur. Informed by the best available science, these projects have combined strategies and regulatory frameworks; technical guidelines for restoration; protection of critical habitats; working with the private sector to adopt more sustainable practices; and creating opportunities for nature-based activities to stimulate economic growth.