Red Lists: Gauging the force of nature in North Macedonia 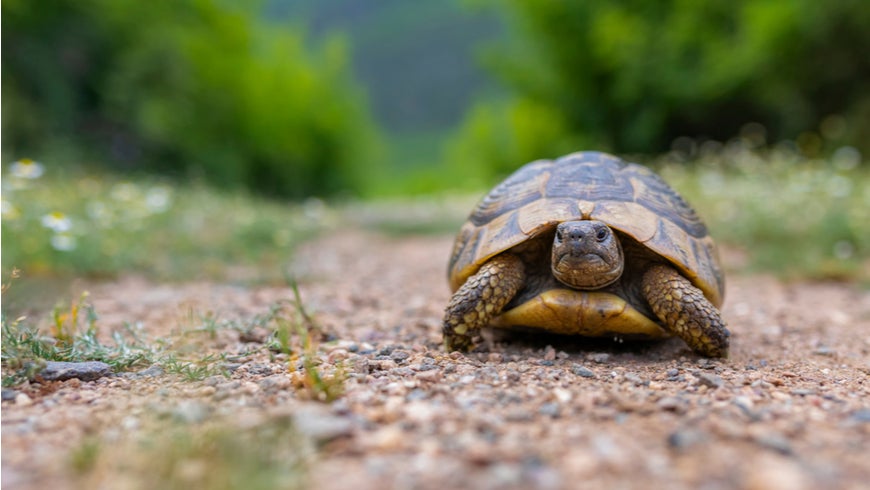 Maintaining healthy ecosystems are important to help protect against the spread of disease. A large mixture of species means that some act as ‘dead end’ hosts, preventing diseases from spreading. As countries plan their economic recovery for after the COVID-19 pandemic, it is crucial that the role biodiversity plays in underpinning the health of people and planet is taken into account. Here’s one example from North Macedonia.

The creation of the first National Red Lists there will provide insight on extinction risks at the national level and help assess the impact of measures to preserve biodiversity.

When rambling in the forests or among the meadows of North Macedonia, you may well come across the patterned shell of a Hermann’s Tortoise. This can give the impression that the slow and charismatic creature is quite widespread.

However, illegal trafficking, road kills, habitat degradation, climate change, and a lack of females may mean that the tortoise’s days in North Macedonia are numbered. Nationwide, the species’ population is set to decline by almost one third over the next 75 years. On one lake island in the country, 90 percent of adult Hermann’s Tortoises are even projected to disappear over roughly the same period.

The species is now classified as ‘vulnerable’ thanks to the efforts of a Global Environment Facility-backed project led by the UN Environment Programme (UNEP), which has helped North Macedonia build its understanding of the true conservation status of the tortoise and many of the country’s other native plants and animals.

A health check for nature

Despite only covering five percent of the Balkan peninsula, North Macedonia is a true European biodiversity hotspot. It hosts over 16,000 wild species of bacteria, lichens, fungi, moss, plants, and animals – more than 800 of which are endemic.

Biodiversity ensures that we have fertile soil, is the foundation of most of our industries and livelihoods, filters air and water, and helps regulate climate. Yet today, one million plant and animal species face extinction worldwide.

In response, UNEP and partners in North Macedonia carried out assessments on the conservation status of all amphibians and reptiles present in the country, as well as 14 vascular plants. An array of stakeholders were involved, including public institutions, academia, national and international experts, and civil society organizations.

As a result, the first national Red Lists of reptiles and amphibians have been drawn up, providing key information on extinction risks. These now form part of the International Union for the Conservation of Nature’s Red List of Threatened Species™ - the world’s most extensive information source on the global conservation status of animal, fungi, and plant species and their links to human existence.

Out of the 32 species of reptiles in North Macedonia, seven are now categorized as 'endangered,' six as 'vulnerable' and eight as 'near threatened,' while ten fall under the category of 'least concern.'

As for amphibians, out of the 14 species found in the country, three have been categorized as 'endangered,' three as 'vulnerable,' three as 'near threatened,' and five as 'least concern.' Disease and habitat loss mean that this is roughly in line with the state of amphibians worldwide.

All 14 subspecies of vascular plants that have been subject of assessment are considered at a risk of extinction. Four are now categorized as ‘critically endangered,’ five as ‘endangered’ and a further five as ‘vulnerable.'

The Red Lists will improve national policymaking, help to set conservation targets, and measure progress towards achieving and implementing European Union Directives in the field of nature protection, as well as the prospective EU Green Deal. Data will also feed into reporting for multilateral agreements such as the Convention on Biological Diversity.

“This was one of the priority actions of our National Nature Conservation Strategy for 2017-2027 and Biodiversity Strategy for 2018-2023. The lists apply to our everyday operations, as well as for reporting on the sustainable management of biodiversity,“ they underlined.

“We are now well equipped to share the acquired knowledge with future national assessors and eager to undertake the same with even more data,” said Dragan Arsovski and Bogoljub Sterijovski - key reptile and amphibian experts involved in the project.

In addition, a preliminary Red List ‘Index’ was created summarizing the overall conservation status for entire groups of species. These help to gauge the general state of health of the country’s biodiversity over time and forms an excellent reporting tool. The real value of the index will be seen once the assessments are repeated in five to ten years.

The creation of the National Red Lists took place under the Achieving Biodiversity Conservation Through Creation and Effective Management of Protected Areas and Mainstreaming Biodiversity into Land Use Planning project, an initiative implemented by UNEP together with the Ministry of Environment and Physical Planning of North Macedonia, with finance from the Global Environment Facility.

"Wild species, from the largest to microscopic ones, interact in ways that maintain delicate natural cycles—ranging from the provision of fresh water or fertile soil—that make Planet Earth habitable for humans. This project is helping to ensure that these universal benefits are sustained," said Johan Robinson, Chief of the GEF Biodiversity and Land Degradation Unit at UNEP.

Support in drawing up the Red Lists was provided by IUCN’s Eastern Europe and Central Asia Regional Office. The Lists can be accessed in English, Albanian, and Macedonian at: http://redlist.moepp.gov.mk/.