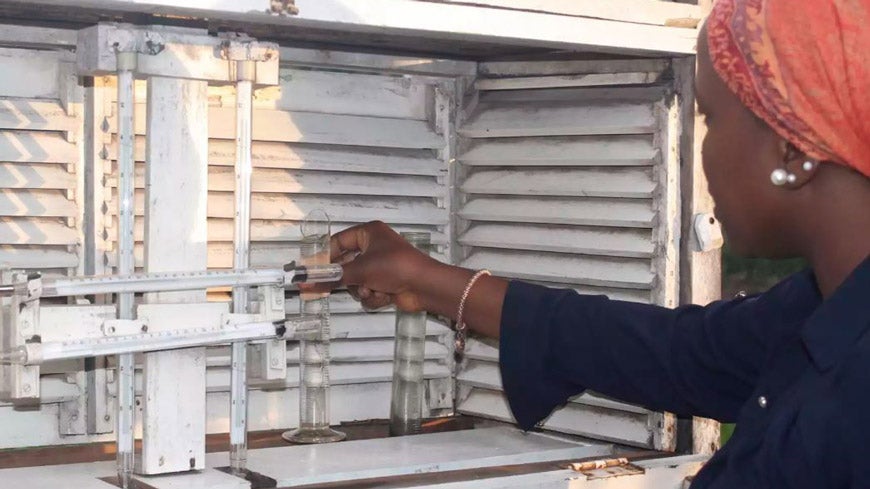 In recent years, substantial investments and great efforts have been supported by development partners and the Government of Sierra Leone to strengthen the country’s ability to prepare for and respond to climate-induced and related hazards.

There were meteorological stations all over the country. People knew what weather was coming their way, knew when to plant their crops and when to harvest, and decision makers had a long-standing meteorological record they could use to make smart long-term investments.

Then came the Civil War in 1991. Lasting for over two decades, the conflict displaced some 2 million people and cost thousands of lives. It also left Sierra Leone’s weather monitoring and forecasting infrastructure in shambles. Nearly every piece of monitoring equipment was destroyed or stolen during the war. Many of the most capable people that had worked at the Met Department lost their lives or were severely impacted by the conflict.

“We basically had to rebuild from zero,” said Tanzila Sankoh, Programme Specialist, United Nations Development Programme (UNDP). “But by leap-frogging technology, looking toward automation and investing in building the capacity of our people, we’ve made great strides in recent years.”

As the country continues the slow process of building strong institutions and improved governance, significant steps are being taken to restore the nation’s once-great backbone of weather and water monitoring capabilities.

With support from the UNDP, community-based early warning systems have been established in 70 communities and around the hydroelectric dams.

The early warnings will provide increased weather intelligence as well as life-saving alerts for the people of Sierra Leone, particularly farmers whose lives and livelihoods have been upended by changing climate patterns that are putting age-old farming practices to the test.

Rainfall patterns have been highly erratic in Sierra Leone in recent years. There has been a notable spike in annual flooding over the last three years. Nonstop rains for over three days in August of 2017 triggered a mudslide that took over 500 lives, injured 500 and displaced over four thousand residents.

In addition to these climate impacts, the country is also experiencing periodic droughts, sea-level rise and increased humidity, making it one of the most vulnerable countries in Africa to the impacts of climate change.

“Sierra Leone has made positive social and economic progress in recent years. But climate change threatens our progress toward the Sustainable Development Goals such as ending hunger and poverty. This uptick in extreme weather events could have devastating impacts on the socio-economic development of the country, as well as crucial sectors such as agriculture, health, education, education, infrastructure, energy and human resources,” said Country Director Samuel Doe.

In recent years, substantial investments and great efforts have been supported by development partners and the Government of Sierra Leone to strengthen the country’s ability to prepare for and respond to such climate-induced and related hazards.

The Global Environment Facility (GEF), UNDP, World Bank, International Fund for Agricultural Development (IFAD), and Food and Agricultural Organization of the United Nations (FAO) have all provided dedicated support toward the rehabilitation of the Sierra Leone Meteorological Department.

The continued support is creating new gains in building important climate services that will help decision-makers use real-time data to make better investments in poverty reduction and energy development geared towards supporting the nation in achieving its goals outlined through Nationally Determined Contributions to the Paris Agreement.

To connect these pieces, data servers have been set-up at the Water Directorate in the Ministry of Water Resources.

A new Climate Information, Disaster Management and Early Warning Systems website (CIDMEWS-SL) is now in place and continuing development to ensure the accurate mapping, response and prediction of disasters across the country. The CIDMEWS-SL system signals a paradigm shift from relief-centric approach to a comprehensive and proactive approach that integrates climate information, disaster management and early warning systems to maximize the ability of the country to manage climate and disaster information at all levels in development decisions, policies and programmes, and to increase preparedness to respond to all kinds of disasters.

Decision makers from all levels of the government – as well as the public and private sectors – can now use the information from the installed automatic weather stations and different types of climate information in the CIDMEWS-SL for their planning processes to issue early warnings and create improved climate information products for disaster management.

All this new infrastructure would easily fall into disrepair without qualified technicians and experts to operate them, analyze and report on the data provided, and support the government in creating climate information services that can extend to vulnerable farmers, support climate-smart businesses and protect recent development gains.

Weather knows no borders, and this transcontinental cooperation and knowledge sharing will be essential in providing an improved climate record for West Africa, as well as protecting people living along border areas.

“A sustainability plan and financial framework for the provision of climate and early warning information to end-users on a cost-recovery basis was developed for the Met Department in 2016,” said the Director of the Sierra Leone Metrological Agency Ibrahim Sinneh. “This will position the Department to generate much-needed revenues to support future early warning systems. With continued support and improved information on our changing weather and climate, we are also building the essential foundations we need to end poverty and reach our goals to leave no one behind in our race toward a low-carbon, climate-resilient future.”