Restoring fortune to the fields of Georgia 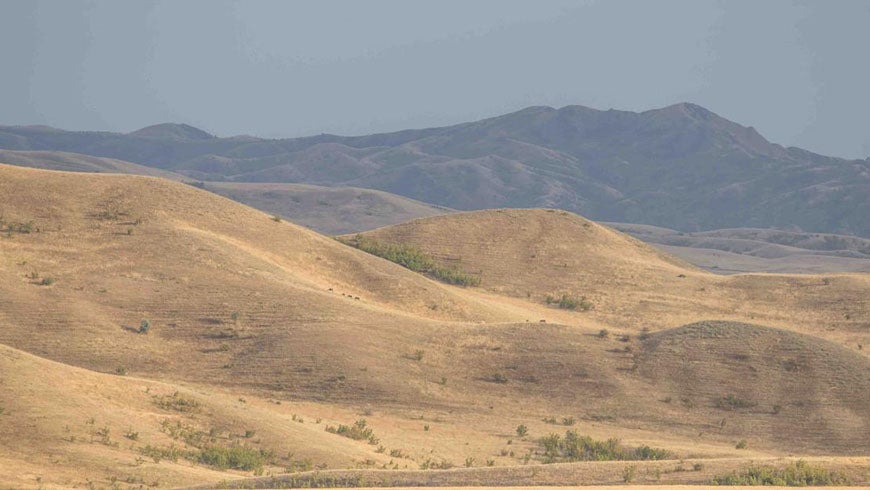 Under the GEF-funded Applying Landscape and Sustainable Land Management for Mitigating Land Degradation and Contributing to Poverty Reduction in Rural Areas project, the UN Environment Programme is working with REC Caucasus and partners across three municipalities to ensure the resilience of local agricultural livelihoods, while using project field results to inform the development of key national policies on pasture management, windbreaks and soil protection. Photo: UNEP/Lisa Murray.

Sometimes referred to as ‘the bread basket of Georgia’, Dedoplistskaro’s fertile soils have provided a living for generations of farmers. But today, periods of drought, compounded by strong, dry winds that erode fields and scatter seeds, are hitting local communities hard.

Ex-soldier Valeri and his family have tried to laugh off the region’s warming weather. “Maybe we should bring camels here and make a tourist centre,” the 40-year-old quips with a smile.

But Georgia’s changing climate is no longer something to joke about for Dedoplistskaro’s farmers.

“The rainfall is less, there was no snow at all this year,” Valeri says. “Temperatures have increased, it was 18[C] degrees in January–it’s normally below freezing. There are more crop diseases and less water, we used to be able to get a lot of water from our well but now we can only get a couple of buckets.”

Now, after 20 years working the land, Valeri has seen his harvest fall from up to 6 tonnes per hectare to just 1.8 tonnes in bad years. Before these intensifying impacts of climate change, crop rotation and sunflower cultivation helped rejuvenate the soil and safeguard against consecutive poor harvests.

“They [sunflowers] worked well, but the lack of water caused fungal diseases, sometimes destroying a large part of the crop,” says Valeri, who saw his sunflower harvest fall from 2.5 to 0.5 tonnes per hectare, before walking away from the crop. With maize and soya also failing, the father of two—like many farmers in his village—began to question the sustainability of his once-comfortable way of life for the first time.

Recognizing the need for local farmers to find ways of adapting to their changing environment, UN Environment Programme, REC Caucasus and partners have opened the way to a range of solutions for Valeri and other farmers in three particularly vulnerable municipalities of Georgia.

As one of 21 farmers to attend a series of trainings under a pilot project in his municipality, for Valeri this meant learning about sustainable land management practices, particularly reduced fertilizer use and effective tiling to lock in soil moisture. But, the key feature of training was the introduction of a particular variety of pea selected by the project as a drought-resistant rotational crop suitable for local conditions—with dramatic results.

“The peas we planted had a real impact. They enriched the soil, prevented pests and reduced weeds. I’m very happy,” says Valeri, who has seen his wheat harvest jump by a quarter, despite slashing his use of fertilizer nearly in half.

From breaking even to sustainable success

Valeri’s success has inspired his friend Guram and numerous other farmers to also reap the benefits of growing these peas. “I’m very optimistic about growing peas, they enrich the soil,” 74-year-old Guram says.

This initiative has also delivered significant economic benefits, with the farmers seeing annual returns of as much as $4,700 per hectare from the new, low-maintenance crop—a welcome change to barely breaking even on past rotational crops.

With the area under sustainable land management more than doubling after just one year and ever more farms in the pilot communities taking up the approaches advocated by the project, Georgia’s farmers may soon have reason to look on the bright side again.

“After other farms saw that my yield from the plot where pea had been sowed was better even though there had been drought, a lot of them became interested,” Valeri says.

“The plants are beautiful, the results are good and it enriches the soil. Everyone is happy!”

Drought, coupled with poor land management, soil degradation and wind erosion have left one third of Georgia’s agricultural land degraded. Under the GEF-funded Applying Landscape and Sustainable Land Management for Mitigating Land Degradation and Contributing to Poverty Reduction in Rural Areas project, the UN Environment Programme is working with REC Caucasus and partners across three municipalities to ensure the resilience of local agricultural livelihoods, while using project field results to inform the development of key national policies on pasture management, windbreaks and soil protection.

Applying Landscape and Sustainable Land Management for Mitigating Land Degradation and Contributing to Poverty Reduction in Rural Areas is just one of more than 80 projects the UN Environment Programme has implemented with the backing of the Global Environment Facility in support of the UN Convention to Combat Degradation and Desertification and other efforts to bring a halt to the threat of land degradation globally. Focusing on the theme “Investing in Land, Unlocking Opportunities”, the 14th Conference of the Parties to the UN Convention to Combat Degradation and Desertification is taking place in Delhi, India from 2 to 14 September 2019.

This story, originally posted by UN Environment, is part of a series featured in the publication "Voices from the land: Restoring soil and enriching lives."

Voices from the land: Restoring soil and enriching lives

Birdsong returns to the hills of Bemolanga in Western Madagascar