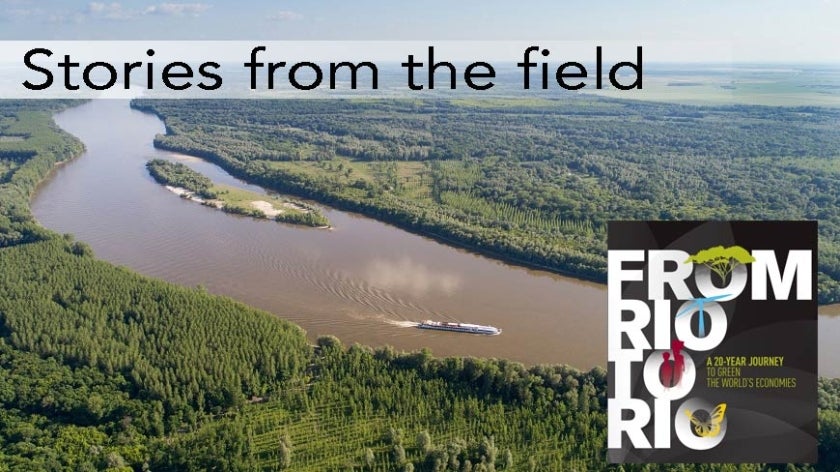 September, 1991, could hardly have been a less auspicious moment for bold environmental initiatives in Central and Eastern Europe.

In just a few months would come the final dissolution of the Soviet Union, the overwhelming political force in the region for half a century. The violent breakup of Yugoslavia was already underway and would not be fully resolved for another eight tragic years. Cooperative efforts on water and the environment, troublesome in the best of circumstances, would seem downright foolhardy when many of the potential participants are bombing each other. Even so, at that fraught moment, governments, the GEF, UNDP, and NGOs meeting in Sofia, Bulgaria, took the first, halting steps toward cooperation on conserving and restoring one of the most important resources they all share, the Danube River.

By the mid-1980s, the need for urgent action in the Danube Basin was plain. Over the previous 150 years, growing human populations and booming industries had wreaked serious environmental havoc. Some 80 percent of the Danube’s wetlands and floodplains had disappeared since the end of the 19th century, threatening key species such as pelicans in the Danube Delta and beavers in the Upper Danube, and leading to worsening floods across the basin. Pollution, especially from organic substances and nutrients, posed a major long-term threat to the environment. In the 1970s and 1980s, nutrient pollution threw off the ecological balance in the western Black Sea and led to a dead zone — produced when oxygen levels are too low for most organisms to survive — and that covered tens of thousands of square kilometers.

The problems were clear, and in theory at least so were the solutions. A map of the Danube shows why: The river stretches 2,780 kilometers from Germany’s Black Forest to the Danube Delta on the western shore of the Black Sea. The Danube River Basin covers 10 percent of Europe, a total area of over 800,000 square kilometers. The basin today includes the territories of 19 countries, making it the world’s most international river basin. It is also home to 81 million people with a variety of languages and histories. With these preconditions, any effort to restore the Danube would need broad, and in fact, unprecedented international cooperation. Far less clear was how this could happen in practice.

Such was the setting for the GEF’s first foray into international waters. While GEF’s work in the Danube Basin has evolved into a multi-faceted program lasting 15 years, it began with a single goal: build the willingness and the capacity for a diverse group of nations with a history of war and mistrust to work together. The first task was to demonstrate the benefits that only such cooperation could achieve. The working hypothesis of the GEF’s International Waters intervention was simple: Get countries to examine the basket of benefits they receive from shared water resources like the Danube they will quickly realize that the basket would be much bigger if they cooperated with their neighbors. Everyone on the Danube Basin needed to understand how such transboundary resources are used, abused, or transformed. A better understanding would give decision-makers confidence that longer term joint interventions could tackle problems more effectively.

Here, political transformation helped catalyze environmental transformation. In the vacuum created by the collapse of the Soviet Union, the European Union was now the region’s dominant economic engine. The promise of accession to the EU and the subsequent need to meet its stringent environmental directives provided the driving force for environmental change in the Danube Basin. The GEF and UNDP provided countries with significant assistance in helping to build their capacity to meet the EU’s accession and legislative challenges. In 1994, meeting once again in Sofia, 11 Danube countries and the European Commission signed the Danube River Protection Convention. This agreement provided the overall legal framework for protecting and sustainably using water and other shared ecological resources in the Danube Basin.

The Convention came into force just four years later, on October 22, 1998, a remarkably fast accession for a complex treaty covering such sensitive and often contested resources. That this was achieved so quickly testifies both to the urgency of the problem and to the foundation that the GEF had helped create for basin-wide cooperation. Days later came another milestone, the creation of the International Commission for the Protection of the Danube River (ICPDR) and its Permanent Secretariat, the main implementing body of the Danube Convention.

Since its creation, the Commission has grown into one of the largest and most active international bodies of experts on integrated water resource management in the world, promoting policy agreements and setting joint priorities and strategies to improve the basin. This permanent, financially sustainable body is now vital to maintaining continuity, momentum, and country commitment to managing the Danube effectively and sustainably.

After 2000, on the basis of a voluntary political commitment by all Danube countries, the main priority for the Commission became the implementation of the EU Water Framework Directive, which obliges EU member states and accession countries to use a river basin approach for managing their water resources. Now that even countries outside the EU have agreed to abide by the Water Framework Directive, effectively all Danube countries are guided by a single overarching legal framework governing the region’s waters.

One of the first projects of the Commission was the GEF/UNDP-led Danube River Basin Pollution Reduction Programme. That effort led to the preparation of the first GEF “Transboundary Diagnostic Analysis” for the Danube Basin with a focus on nutrient pollution. This analysis would become an important building block for subsequent Danube analyses and for an action program that included measures to reduce water pollution, promote conservation, and restore ecosystems. Joint action by countries was seen as essential to reduce the flow of pollutants from agricultural, domestic and industrial sources into the Danube and Black Sea.

A GEF/World Bank Investment also provided a focused regional framework for country-level investments aimed at a common goal of reducing nutrient pollution in the Black Sea and helping to jump-start and further accelerate key investments in sectors such as municipal wastewater, agricultural run-off, and industrial pollution, as well as policy and legal reforms and capacity building for enhanced monitoring and enforcement.

The process established a scientific and technical factfinding analysis feeding into a negotiated plan that establishes clear priorities for action. This initiative in the Danube basin has become a model for other transboundary water problems. The joint fact-finding and analysis encompasses two fundamental components of multinational efforts like the Danube project, building trust and fostering a shared understanding of the problems all the parties face.

In addition to cross-border cooperation, the EU Water Framework Directive obliges Member States to engage the public into river basin management planning process, through which it also encourages the involvement of NGOs and local citizens in water issues. In order to facilitate this process, the GEF, through its Small Grants Programme, helped create the Danube Environmental Forum, the umbrella organization for the largest network of NGOs and local communities in the basin. It consists of 174 member organizations from 13 Danube countries. The Danube Small Grants Programme marked the first time the GEF had worked with NGOs in this way.

The Danube Environmental Forum was particularly successful in fostering public involvement, particularly in countries like Serbia, Bulgaria, and Romania, where NGO activities and the notion of public access to information have short histories. NGOs, working on door-to-door campaigns and hosting numerous meetings at the community level provided the means by which the project could reach many of the stakeholders, especially farmers. Many projects supported by small grants were geared to solving nutrient reduction, and about half of the small grants went to NGOs supporting activities to promote best agricultural practices.

Public awareness of the issues facing the Danube is now at an all-time high. In 2004, the International Commission for the Protection of the Danube River launched international Danube Day to celebrate the 10th anniversary of the signing of the Convention. Danube Day is now an annual event paying tribute to the Danube and its tributaries. The diverse activities on and near the river draw millions of people from a cross-section of society and help create stronger connections between people, the basin and its biodiversity, mobilizing Danube Basin residents to take action.

The GEF’s experience in the Danube illustrates the necessity of working at various spatial, temporal, and political scales. The GEF’s involvement began with a regional focus, supporting steps toward a binding, international convention. Once that framework was in place the focus turned to efforts at finer and finer scales, from basin-wide to binational to national to local, all the way to working with individual farmers to improve their practices. Working at all of these scales can have significant impacts as long as the broader commitments and institutions are in place. That lesson is being been applied to other transboundary waters, such as the Benguela Current off the southern African coast, Lake Victoria, and the Guarani Aquifer beneath Argentina, Brazil, Paraguay and Uruguay.

The support by the GEF and UNDP not only turned the Danube into a model of integrated river basin management, it also backed up the political stability of the whole Danube region. The Commission was able to begin implementation of the Water Framework Directive so that it is now the benchmark for European transboundary water bodies. With GEF’s support, the Commission also took a holistic look at the pressures facing the river, such as the significant eutrophication problems caused by agricultural inputs, the important flood buffering attributes of riverine wetlands, and the critical need to improve tariff and charge schemes for water and sanitation systems. Ultimately, GEF and UNDP efforts in the Danube– Black Sea area could become a model for expanding public awareness of the need to embrace integrated water resource management as a way to ensure that economies can grow without environmental destruction.

The environment of the Danube Basin and of the Black Sea is now showing clear signs of recovery, overcoming a legacy of pollution that has left scars across the region. In the northwest shelf of the Black Sea, the turnaround has been nothing short of extraordinary. Twenty years ago, the entire shelf was hypoxic, a huge dead zone marked by periodic blooms of algae but few fish, shellfish, or other species. Now, with reduced nitrogen and phosphorous pollution, oxygen depletion in the lower levels of the sea observed in the 1970s and 1980s has been virtually eliminated, with oxygen levels now at or near saturation in most areas. Measures of biodiversity are up: The number of benthic species observed in the early 2000s was nearly double that of the late 1980s, though still significantly lower than conditions in the 1960s. More broadly, across the Danube Basin, nitrogen emissions have decreased by 20 percent and phosphorus almost by 50 percent over the last 15 years.

The Danube offers a telling illustration of the GEF’s catalytic role. The GEF has three categories of catalytic activities, all of them evident in the Danube: foundational, demonstration, and investment. In the Danube project, the GEF used these three categories in a phased approach: the foundational phase of bringing countries together; a demonstration phase with efforts like the pollution reduction programme; and an investment phase in which countries and other donors join to provide the funds necessary to scale up activities. Acting as a catalyst has always been fundamental to the GEF, and will continue to shape the way it works in all its focal areas and in all regions. 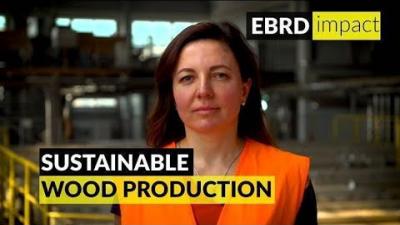 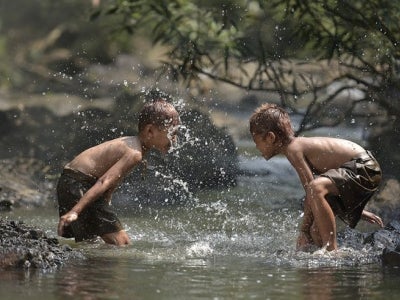 Don’t water down the value of water: some thoughts on World Water Day 2017