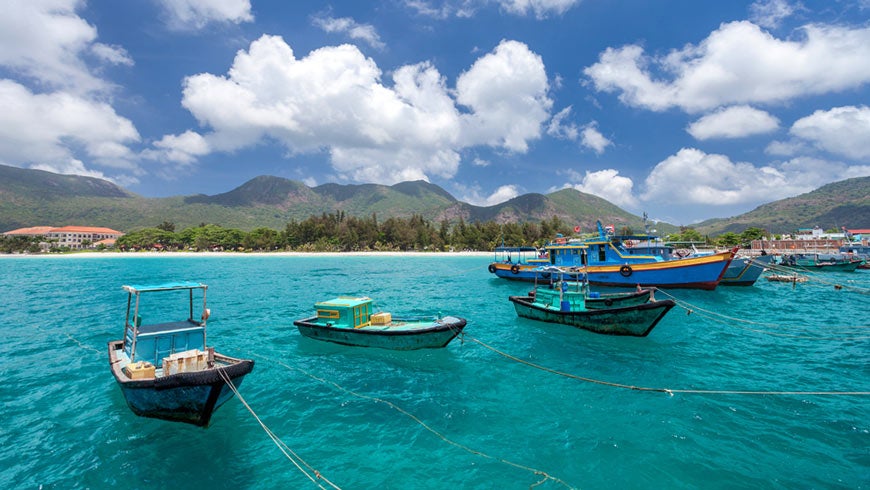 With the support of UN Environment, the Vietnam Institute of Oceanography, and the Global Environment Facility (GEF), fishermen along Vietnam's Ninh Hai coastline are working to ensure the preservation and sustainable use of the area’s marine resources.

As dawn breaks across the beach and the first rays of sunlight illuminate the turquoise waters of southern Vietnam’s Ninh Hai coastline, fishermen are already hauling in their nets of shimmering, slithering silver fish. Here, in Nui Chua National Park, the sea is the backbone of the economy and the key source of sustenance for local families, many of whom have been fishermen for generations.

Ninh Hai plays host to the richest levels of marine biodiversity of any coastal region in Vietnam, providing a habitat for approximately 310 species of coral, 304 species of reef fish and an endangered species of sea turtle. In this part of the South China Sea, coral reefs benefit from seasonal flows of cool water, a unique feature of these ecosystems that protects them from increasing sea temperatures and makes them hotbeds of biological diversity, vital to the region as breeding grounds that replenish nearby reefs with coral species.

Back in 2010, Nui Chua’s marine resources were under threat from overfishing, illegal fishing practices and the harvesting of seagrass and sea turtle eggs. Siltation from the construction of two nearby fishing ports also played a role in the degradation of this precious habitat. But the tide is turning for this corner of the South China Sea, with the local community, national park authorities and government agencies coming together to create and implement an ecosystem management plan with the support of UN Environment, the Vietnam Institute of Oceanography, and the Global Environment Facility (GEF), ensuring the preservation and sustainable use of the area’s marine resources.

Thang is one of the community members who volunteers his time to the conservation project. He wears his blue national park t-shirt with pride, a fitting symbol of how much his attitude and behaviour has changed as a result of his involvement.

Thang says that, like many of his neighbours, he used to collect and sell Sargassum seaweed. But after becoming a marine conservation volunteer and joining trainings offered by the project, his attitude changed as he came to understand the seaweed’s importance as a spawning and nursery environment for fish.

He now educates others in his community on the importance of conserving the marine ecosystem, as well as raising awareness of harmful fishing practices.

“We had no conservation activity previously, so locals used to collect coral and sea turtle eggs,” he explains. “Outsiders would come and use dynamite or cyanide for fishing, which is very harmful for marine life.”

Thangs says that while it has taken time to convince the community of the benefits of conservation, the results have been very positive.

“I used to observe dead coral, but now it’s growing well – and fast. Since our night watch began a few years ago, the population of sea turtles has increased too,” he enthuses, referring to the Nui Chua sea turtle conservation site, where volunteers take it in turns to spend the night, monitoring the beach at regular intervals to safeguard the turtles and their eggs.

In addition to these night patrols, volunteers note any suspicious fishing activity, educate their communities and vigilantly remove invasive starfish to prevent them from destroying the coral. Like Thang, many of the conservation volunteers have also taken part in project-led efforts to diversify local livelihoods, supplementing their income through industries such as goat rearing, and therefore reducing the pressure on local marine resources.

With the enthusiastic backing of the local community, over 2,300 hectares of coral reef and 280 hectares of seagrass are now being managed effectively. Over 1,200 fragments of hard coral have also been transplanted with the involvement of local volunteers, helping to restore past damage to the area’s reefs.

While Thang is proud of his role as a conservation volunteer, he says that what motivates him to continue the most is the knowledge that he is helping to preserve this precious marine ecosystem for his children.

“The marine environment is very important because it provides resources for our daily lives,” he says. “Management activities not only protect our resources, but they also teach the young generation that they should continue this work in the future.”

The Demonstration of Sustainable Management of Coral Reef Resources in the Coastal Waters of Ninh Hai District, Ninh Thuan Province, Vietnam project was part of the UN Environment and Global Environment Facility-led South China Sea project, aiming to reduce marine degradation at the intersection of the South China Sea and Gulf of Thailand.

The GEF’s contribution to sustainable development in Vietnam