We are a large ocean state: Environmental innovations for sustainable development of Seychelles 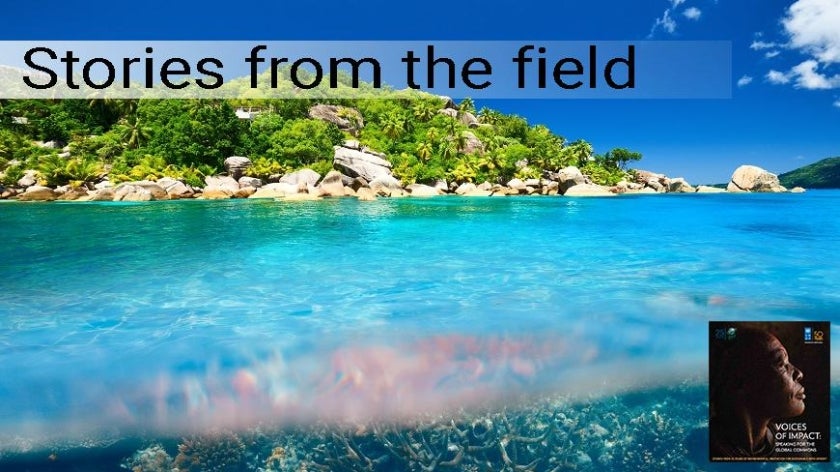 We are a large ocean state.jpg

Nowhere else is the inextricable connection between people’s well-being, economic prosperity and the environment clearer than on small islands. Since its inception, the GEF has been a strong partner and supporter of environmental programmes that promote sustainable development in Small Island Developing States (SIDS), such as the Republic of Seychelles.

The Seychelles archipelago consists of around 115 islands, with a total land area of 455 km2 , spread across 1,374 million km2 of the western Indian Ocean – the ‘Large Ocean’ referred to by Minister Dogley. The Seychelles is a developing country, with a significant portion of its population still living close to the poverty line, engaging in artisanal fishing and small-scale agriculture for their livelihoods. Land is a scarce resource, land-use pressure is intense, and Government has to juggle the needs of a growing population for land and housing, and the demands for ever more tourism development, with its commitment to the environment and biodiversity conservation. The islands, like others, also face challenges from climate change and unsustainable use of natural resources.

With the support of GEF finance, and in partnership with the UNDP, the Seychelles Government and civil society are able to tackle these issues head-on. Over the years, a series of projects under different thematic areas has provided essential support to the development planning process, establishing a legal framework for environmental and land-use planning; addressing prioritization of land management issues and expansion of the Protected Area system, and marine spatial planning; exploring innovative Protected Area management scenarios and financing mechanisms; and mainstreaming biodiversity into the tourism and fisheries sectors that together employ half the population.

This support has motivated the country to commit to protecting 50 percent of its land area and 30 percent of its ocean territory, using funding leveraged through innovative mechanisms such as the landmark Debt-for-Adaptation swap that was signed in 2015, and private sector support. The country has set itself a further target of achieving 30 percent renewable energy by 2030, and 100 percent renewable energy before 2050. The Seychelles has established an energy policy that focuses on energy efficiency and up-scaling of the solar energy programme that was supported by UNDP through GEF-supported projects. All of this has contributed to developing a holistic Blue Economy approach, placing ocean governance in the forefront of sustainable development, and coupling this with a drive to win climate finance for the renewable energy agenda – a dual approach that is setting an example for SIDS globally.

The story below is told by Didier Dogley, the Minister for Environment, Energy and Climate Change in the Republic of Seychelles. His first involvement with conservation was at the age 15, when he worked part-time with a team of rangers. He went on to study Landscape Management at the University of Erfurt, followed by a Masters Degree at the University of Reading. He joined the Ministry of Environment in 1989 as a horticulturalist and later become Director General of Nature Conservation. Promoted to Principal Secretary for Environment in 2007, he worked closely with UNDP to establish a GEF Programme Coordination Unit, as a cost-effective, programmatic approach to country management of the GEF portfolio. He took on the role of GEF Operational Focal Point from 2007 to 2015, and was appointed as Chair of the National Planning Authority in 2012. After two years as Special Advisor to the Minister, he was, himself, appointed as Minister for Environment, Energy and Climate Change in February 2015. He is committed to mainstreaming environment and biodiversity within national development, and to the pursuit of a national goal of 100 percent for renewable energy.

“When I first became involved with environmental programmes, they involved a small group of professionals implementing biodiversity conservation projects focussed mainly on Protected Areas. Over the last 8-9 years, I have seen this programme of action – which has been catalysed by the GEF and UNDP – expand enormously, away from a pure Protected Areas focus. As a result, the number of NGOs in Seychelles has mushroomed, a variety of CBOs have been formed, and many of these groups have established partnerships with the private sector – everyone started to get involved. The Small Grants Programme, in particular, has played a big role in this, catalysing interest, establishing groups and providing seed funds – NGOs and CBOs were then able to mobilize twice as much from the private sector and from the government’s own Environmental Trust Fund.

The Biodiversity Mainstreaming project catalysed engagement with the tourism sector, which is now not only aware of conservation issues, but initiating its own activities and engaging with communities who live around their properties. A tourism sustainability label was developed, with a number of hotels now enrolled in the programme. The project also engaged directly with fishermen – who previously had not thought about conservation at all, only being concerned with catching fish and selling them for income. Our seas were open access, people could fish as much as they liked. We first got the fishermen organized into associations, then got them to limit fishing of breeding stock, then got them involved in stock assessment, and so on. The project initiated a fisheries management planning process – led by the fishermen themselves – covering key fishing grounds on the Mahe plateau. Now the fishermen are taking the initiative, standing up at meetings and talking about fisheries management plans and eco-labels – you never heard that before! This trend will be sustained and scaled-up under a Blue Bond initiative which is jointly financed through the GEF, World Bank and private sources.

When I became Principal Secretary, my experience was mainly limited to biodiversity and endangered species, especially plants. Close engagement with UNDP-supported, GEF-financed projects broadened my interests and knowledge significantly. Every time we developed a new project, we sat down and discussed the development challenges facing Seychelles, and how best to address them through environmental innovations; we discussed where to invest the money, and how to use it to leverage additional funds to support the national effort. In my professional life this has helped me to tackle a range of issues we face here on our small islands. Recently we have shifted gear towards climate change mitigation projects. Investment in solar technology and resource efficiency projects has effectively raised national interest in renewable energy technologies. We have put into place a rebate scheme to support investment in photovoltaic technology and loan schemes to support investment in energy efficient appliances.

I became really interested in this and adopted the ideas personally – I believe in leading by example. The work initiated through the projects has helped me to assess my own contribution to the environment and how to reduce my own carbon footprint. My partner, Frauke, and I have invested in retro-fitting our home with energy-efficient lighting and appliances, solar water heating, a rainwater harvesting system and tank storage to supply our garden (I still love gardening!); we have a compost plant and recycle a third of our household waste. I firmly believe that it is feasible for countries today to achieve 100 percent renewable energy, if the political will is there and the necessary resources are made available. In Seychelles, we have initiated a project to determine how we can achieve this target and become carbon-neutral before the UNFCCC target date of 2050.

In these islands, we used to think only in terms of our terrestrial area, or maybe the coastal zone up to about 35 km from the shore – and we thought of the rest of our 1.4 million km2 of ocean territory as something that ‘sat there’ without really needing to be managed. Our Protected Area projects have been crucial in developing baselines for marine spatial planning to guide the utilization of our ocean space. We were able to survey and accumulate data for the whole ocean space on everything from biodiversity, to fishing efforts, to oil and gas exploration areas, and put it into one database. This process is showing us how to plan for the future, helping government to define a Blue Economy approach, centred on the effective utilization of our ocean space. The planning process has, in turn, led to the recently-concluded Debt Swap, and we will use the debt relief to fund both marine conservation and socio-economic development of the marine environment and our country. This is something that many other SIDS are taking as an example. In fact, we no longer consider ourselves as Small Island Developing States, but as Large Ocean States – the portfolio of projects funded through the GEF has made a major contribution to this transformation.

The Biodiversity Mainstreaming project has had major impacts. It brought together the Ministries responsible for environment and land-use planning and housing, who used to be at loggerheads before. The project created a database identifying ecologically sensitive areas, and areas that were best suited for development. We now hear the land-use people referring applicants to the environmental guidelines, telling them what they have to do from an environmental perspective to secure planning permission, rather than us having to tell them. The project also financed two ground-breaking tourism carrying capacity studies. The study for La Digue island really woke up the Government by showing how close we were getting to mass tourism, which is not what Seychelles is about and certainly not what visitors to Seychelles want to see. Following this, the Government moved quickly to put a moratorium on the development of any further large hotels in Seychelles, and is now financing carrying capacity studies for the main islands of Mahe and Praslin, to reassess how to go about future development of the country.

Over the years of my involvement as GEF Focal Point, we have seen a clear evolution from simply working on protected areas and endangered species, to working on challenges of sustainable development, putting the tools, measures, action plans and strategies into place that I think will guide Seychelles for a long time to come. I am especially happy to see our children turning into trained young professionals, who are organized and engaged, and who really believe in sustainable development. We are reaching more people than ever before, and building our future environmental leaders.” 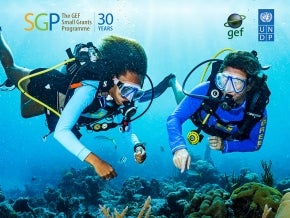 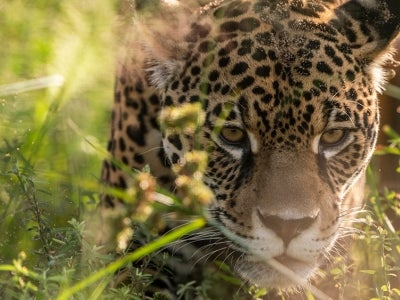 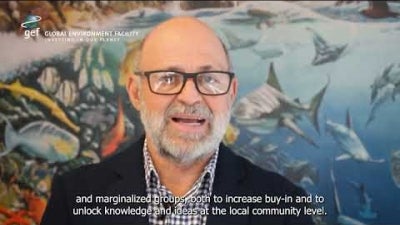