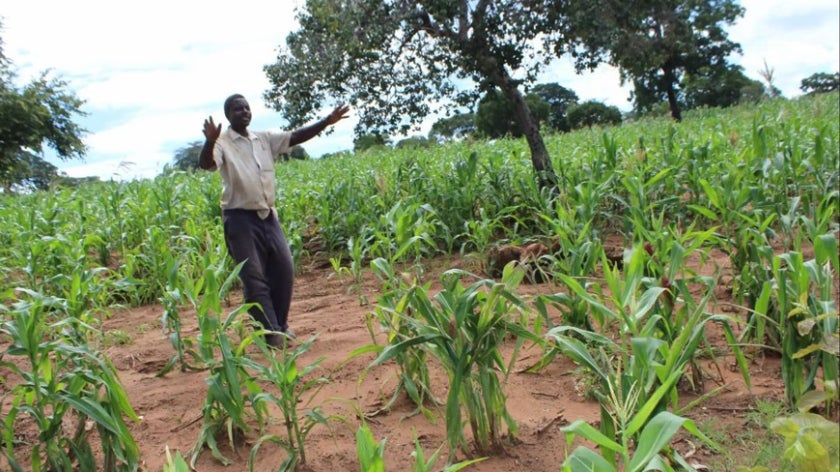 Walking reluctantly through his wilted eight-hectare maize field, Sililo Musepei waits for a sign that the rains will eventually come.

Usually, he would look for clouds in the sky or birds singing. This time though, he’s anxiously expecting an agro-meteorological advisory from the Zambia Meteorological Department.

Like many Zambian small-scale farmers, Musepei, 44, has long relied on traditional weather indicators, such as the blossoming of certain indigenous trees or the constellation of stars, migration of bird species, appearance and disappearance of reptiles and many others to manage their crops.

But such traditional know-how has become increasingly unreliable in the face of climate change, which has disrupted the seasons and led to prolonged dry spells, greater flooding and erratic rainfall.

"Indigenous knowledge of predictions have become more like tossing a coin," Musepei says. “We now see that traditional ways of predicting the weather just don’t work. With climate updates, I now know that if it rains tomorrow I can save my fertilizer for another day.”

Zambia has seen increasingly unpredictable weather, including dry periods and high temperatures this year. Unfortunately, these hit at the very time of year when maize – the country’s staple crop – began putting out tassels. Hardest hit are small-scale and subsistence farmers as they largely depend on rain-fed crops for their livelihoods.

In the current 2017/2018 farming season, for example, the monsoon rain was expected in mid-October but started four months late, in February.

This led to poor germination of crops, especially of cereals, creating stunted growth rates that have translated into low yields, including for maize and beans — two key crops that constitute most diets in Zambia.

Zambia’s Ministry of Agriculture projects that maize production may drop around 50 percent in the current crop season because of a prolonged dry spell that affected the main maize producing areas including Southern, Western and Eastern Provinces.

This has huge implications for a country where 70 percent of people rely on agriculture for a living. About 60 percent of the country’s people live below the poverty line, more than 40 percent of those in extreme poverty, according to the 2016 UNDP Human Development Report.

To help remedy the situation, a UNDP-supported project that provides regular weather forecasts and agriculture advisories for farming communities, made a significant difference during the recent dry spell. The aim is to minimize the impact of adverse weather on crops and boost agricultural production.

With funding from the Global Environment Facility Least Developed Countries Fund, UNDP worked with the met department and district agriculture officers through the Climate Information and Early Warning Systems Project to notify farmers before planting time that the season would be dry, and advised them to substitute their regular crops with varieties that required less water.

Weather updates were sent by text messages in English to lead farmers who have volunteered for the pilot project in three districts. They relay the information to fellow farmers in local languages, as needed.

To broaden the reach of weather updates, the project partners with community radio stations to broadcast weather information in local languages and trains the presenters on how to interpret the information.

“We push agro-meteorological content to small-scale farmers to help them increase their food production. Our regular weather updates give farmers up to 10 days lead time to plan during the rainy season. It helps them prepare for extreme weather events to better manage their crops and the safety of their livestock,” says Edson Nkonde, Acting Director of the Zambia Meteorological Department.

The content is delivered through community radio, SMS and town hall meetings in a dozen local languages – which makes the service inclusive for farmers with little formal education as well as those who are illiterate. And it works, Nkonde said.

“We have seen a lot of livelihoods lost, particularly in rural areas because of adverse weather conditions and poor planning,” says Mandisa Mashologu, the UNDP Country Director in Zambia. “This service helps reduce their losses and helps farmers plan for climate risks, makes their farming more diversified and resilient to climate change,.

Musepei and fellow farmers say they use the updates to make more informed farming decisions.

“The seasonal forecasts help us in planning and deciding which mix of crops and seed varieties we will be planting to maximize productivity based on the expected weather pattern,”

Some farmers have drawn comfort from the regular weather updates. Most farmers adopted a practice known as inter-cropping - growing two or more crops together – meaning farmers have another crop to fall back on when maize harvests fail because of poor rainfall.

Farmers who heeded the agro-meteorological advisories got a better idea of when, how and what to plant. As a result, they got higher yields, less waste, and on average increase their income. “Kubona, kona ku utwisisa – Seeing is believing,” Peter Kamusaki, Sesheke District Agriculture Coordinating Officer said in the Lozi language.

“My harvest this farming season was far beyond average because my immediate neighbor who used the normal traditional way of predicting the weather did not harvest anything, despite having used fertilisers and certified seed,” says Gertrude Sililo in Gwembe District in the Southern Province.

In many parts of Zambia, more than half the rural population carry mobile phones. Crop prices, weather forecasts and agricultural tips are now in the palms of their hands.

Meteorologists and agriculture experts here say good rainfall during the next farming season is key to boosting a rural economy hit by delayed and lower rains last year.