Climate finance and the urgency for adaptation in the developing world 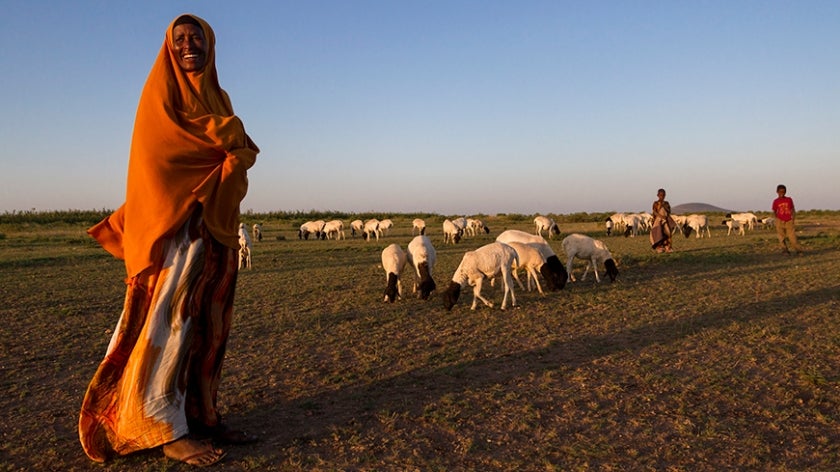 There is growing momentum in the international community to ramp up climate finance for mitigation and adaptation actions. Undoubtedly, a focus on climate change adaptation in the developing world must be a priority for the financing. At the same time, there is a rallying call for countries to focus post-COVID-19 recovery investment on green and resilient pathways that take into consideration urgency to address climate change priorities. To ensure balance between mitigation and adaptation outcomes, there is a crucial need for equity and justice in deployment of climate finance. This will be key for developing countries to scale-up innovations and practices that are transformational. Investment in major sectors such as agriculture, infrastructure development, energy, and urban transformation will help promote technology leapfrogging in developing countries.

Why adaptation in the developing world?

The growing commitment by world leaders toward a net zero economy is raising prospects that perhaps a dangerously warmer planet might be avoided by the end of the century. Nevertheless, for the developing world, where the effects of climate change are already being felt, the race to net zero might be too little too late. According to the Intergovernmental Panel on Climate Change (IPCC), human activities have already caused approximately 1.0°C of global warming above pre-industrial levels, and greenhouse gas emissions and atmospheric concentrations continue to increase. Furthermore, developed countries must pursue highly ambitious mitigation actions to keep warming to less than 2°C above pre-industrial levels. It appears inevitable therefore that developing countries will contend with the effects of climate change for decades to come. This clearly highlights the urgency for ramping up climate finance to invest in urgent adaptation actions in these regions.

Vulnerability to climate change is a social, environmental, and economic dilemma for countries throughout the developing world. Rising temperatures and extreme weather patterns are affecting yields of major staple crops such as maize and wheat. The African continent, which is among the most vulnerable to climate change, is already experiencing the effects of temperature increases, sea level rise, as well as changing rainfall and weather patterns. The recent devastating floods in parts of Southern Africa and invasion of desert locust in the horn of Africa are examples of how climate change is affecting the continent. The consequences are profound, ranging from increased human exposure to health and disaster risks, to worsening food insecurity and water scarcity; all of which undermine the livelihoods of smallholder farmers, pastoralist communities, fisherfolk, and coastal communities.

The IPCC projects that climate change alone could force more than 3 million to 16 million people into extreme poverty, mostly in Asia and sub-Saharan Africa, and through impacts on agriculture and food prices. In these regions, communities affected by climate change often lack the capacity to cope or are not able to access or implement innovative technologies for adaptation. In the absence of such opportunities and adaptive capacity, the hardest hit and most vulnerable populations are predisposed to migration, often across international borders. According to a recent World Bank report entitled “Groundswell: Preparing for Internal Climate Migration,” the Latin America, sub-Saharan Africa, and Southeast Asia regions together will generate 143 million climate migrants by 2050.

These trends highlight the urgency to position adaptation as a major priority for climate financing in the developing world. The focus of such financing is to help countries strengthen resilience and reduce vulnerability to adverse impacts of climate change, and support efforts to enhance adaptive capacity in the most affected communities.

Examples of how these actions can make a difference are emerging throughout the developing world. This includes innovative projects financed from climate change adaptation funds hosted by the Global Environment Facility: the Least Developed Countries Fund (LDCF), which supports urgent, medium and long-term adaptation needs in least developed countries (LDCs), and the Special Climate Change Fund (SCCF), accessible by all developing countries. The GEF financing supports priorities ranging from integration of appropriate adaptation measures into development plans and policies at multiple scales, to introduction of climate-resilient management practices across urban, production, and natural landscapes.

As of January 2021, the GEF has invested $1.9 billion in grant funding from the LDCF and SCCF for 386 adaptation projects in 98 countries. The investment has delivered direct benefits to 30 million people, brought over 7 million hectares of land under climate resilient management, and supported adaptation mainstreaming in 507 regional, national, and sector-wide policies and plans, and 2,034 sub-national plans and processes. In Bangladesh, the government is building resilience in its vulnerable coastal communities, transforming barren hectares of land into livelihood-supporting plots through an innovative land-use model that also contributes to reforestation. In Ethiopia, farmers living in arid lands are learning how to cope with drought through innovative techniques for watershed management and irrigation, seed production and distribution, and pest control. Malawi, a country that is already experiencing both extreme flooding and droughts, is introducing more-resilient livelihood activities in rural areas, to help reduce the vulnerability of its populations.

Although these achievements highlight what is possible, much more needs to be done to scale-up adaptation globally. Significant levels of financing are needed to address the most pressing and urgent needs in the developing world. Mobilizing the financing needed has been an important aspect of the evolving global discourse on climate finance. According to the UN Environment Programme’s Adaptation Gap Report 2020, adaptation cost is expected to be $140 - $300 billion annually by 2030. While climate change mitigation has attracted diverse options such as carbon taxes, carbon offsets, payments for ecosystem services, and ‘cap and trade,’ financing for adaptation is still very limited. The current global architecture for climate finance, with the Global Environment Facility and Green Climate Fund at the core, can play a major role in mobilizing the financing to meet the resources needed for adaptation.

Climate finance typically consists of grants, loans, debt relief, and increasingly, private investments. Private investment through value chains, market development, risk transfer and sharing mechanisms, and insurance/reinsurance are also becoming attractive for scaling-up much needed innovations for adaptation and resilience. A key priority in this regard is the potential for combining public and private investments through blended finance. The growing commitment to adaptation by the international financing institutions could play a crucial role in helping developing countries attract private capital. For example, the African Development Bank recently launched the Africa Adaptation Acceleration Program (AAAP) to mobilize $25 billion to scale up and accelerate climate change adaptation actions across Africa. The funds can be deployed to help governments unlock and enable private capital by addressing institutional, policy, and investment barriers.

More than ever before, developing countries are in an even greater position to implement adaptation actions that also deliver mitigation benefits. For example, natural climate solutions such as conservation of tropical forests, restoration of degraded lands, and improved land management actions that increase carbon storage and/or avoid greenhouse gas emissions, are also critical for achieving adaptation and resilience. Similar opportunities have also been proposed for nature-based solutions that deliver both adaptation and mitigation benefits.

There is also a clear need to ensure that climate financing for such innovations directly benefits the most affected and vulnerable communities. This will create opportunities for local entrepreneurship and job creation, involving youth and women, and strengthening small- and medium-sized enterprises (SMEs). In addition to the climate change adaptation and mitigation benefits, this approach will support the overall economic and social well-being of vulnerable communities. As a result, climate finance for adaptation could play a vital role in supporting the implementation of the Sustainable Development Goals across the developing world.

This piece was originally published on the USAID Marketlinks blog.