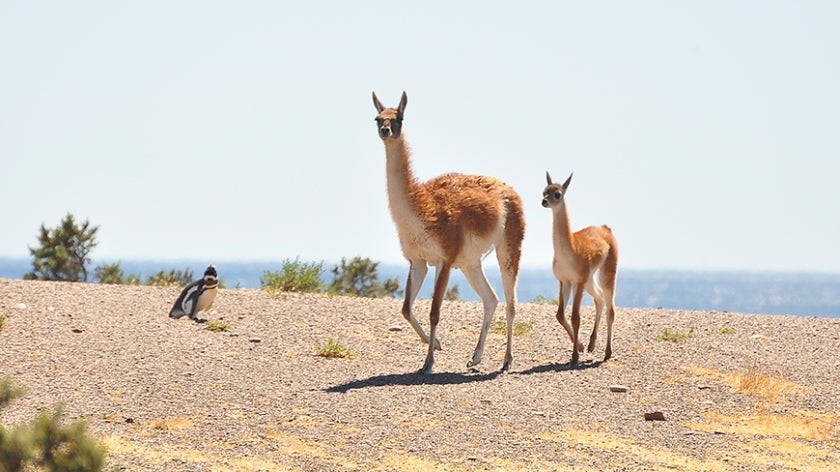 Photo courtesty of Paola Ciraolo, Ministry of Tourism of Chubut

Argentine scientists have developed a potentially potent weapon against COVID-19, derived from a special kind of antibodies in the bloodstream of domesticated llamas. The finding was made while working on a Global Environment Facility-supported research project designed to help protect the llama's wild and threatened cousin, the guanaco.

A team from Argentina’s National Institute of Agricultural Technology (INTA) had been researching the potential of using guanaco antibodies, known as nanobodies, to treat rotavirus – the culprit behind an often-deadly form of pediatric diarrhea – when the coronavirus pandemic struck.

They quickly shifted their attention to a new enemy: SARS-CoV-2.

By immunizing llamas with the spike protein of SARS-CoV-2 coronavirus, the team were able to induce the animals to produce a strong antibody response – opening the door to potential new preventative and therapeutic treatments for the coronavirus, based on recombinant monoclonal nanobodies.

From the nucleic acid of the llama’s lymphocytes, the Argentine scientists engineered nanobodies that are capable of binding together the spike proteins that attach to human cells and cause COVID-19 infection. The obtained nanobodies can block the virus-cell interaction, causing the neutralization of the infection.

The INTA team is now among several units around the world racing to turn these immune cells into a defense against COVID-19. Their research could potentially form the basis of both a preventive and a therapeutic treatment for the disease that has killed more than 3.4 million people worldwide and caused untold economic damage.

The idea is to develop an inhalator or nebulizer treatment that can directly reach and neutralize the virus along the respiratory tract – in the throat, airways, and lungs.

This research effort is part of a GEF-supported project funded by the Nagoya Protocol Implementation Fund and aimed at helping Argentina implement the Nagoya Protocol on Access to Genetic Resources and Benefit-sharing, a global agreement to promote the conservation and sustainable use of biodiversity through fairer distribution of wealth generated by genetic resources.

The project, managed by Argentina’s Ministry of Environment and Sustainable Development and the United Nations Development Programme (UNDP) is geared toward strengthening Argentina’s access and benefit-sharing regulatory framework and raising awareness of the potential financial and non-financial benefits of the wealth of genetic resources in one of the world’s most biodiverse countries.

Florencia Gómez, Secretary for Environmental Policy and Natural Resources of the National Ministry of Environment and Sustainable Development, said Argentina’s rich biological diversity presented important opportunities in science and biotechnology and for the conservation and sustainable use of genetic resources.

“Based on this project, we seek to promote and strengthen national research based on the genetic resources of biodiversity, as a strategy for the enhancement, visibility and conservation of biodiversity,” Gómez said. “The implementation of the Nagoya Protocol allowed the INTA team to carry out activities planned within the projects framework, and now also the development of activities of great relevance to the work that this team is doing in response to COVID-19.”

Biological discoveries can generate substantial revenues for the cosmetics, pharmaceuticals, biomedicines, and agriculture industries, among others. Through the adoption and implementation of the Nagoya Protocol, signatories hope to promote a more equitable global economy and to encourage local communities to manage the ecosystems they inhabit more sustainability.

The INTA team has previously successfully used llama nanobodies against other viruses such us rabies, H1N1 influenza, rotavirus, and human norovirus – the leading cause of food-borne diarrhea. Under the GEF- and UNDP-supported project, they are now working to compare llama nanobodies to rotavirus with those generated against the same virus but from its near relative in the camelid family, the guanaco.

About 500,000 of the wild, woolly mammals remain in Argentina’s Patagonia region, though they face threats from climate change-driven drought, illegal hunting, and competition from domestic sheep that co-inhabit Chubut province.

Camelid antibodies and nanobodies are interesting to scientists because they are smaller, more stable, and less expensive to produce than human ones. Researchers have found them effective in preventing and treating a range of illnesses, including the coronaviruses that cause severe acute respiratory syndrome (SARS) and Middle East respiratory syndrome (MERS).

The hope is that success with the rotavirus research will yield a dual benefit: a low-cost and effective treatment for an illness that kills more than 450,000 people worldwide each year, many of them children; and better protection for the guanaco and its habitat.