How restoring nature can yield both benefits and dividends 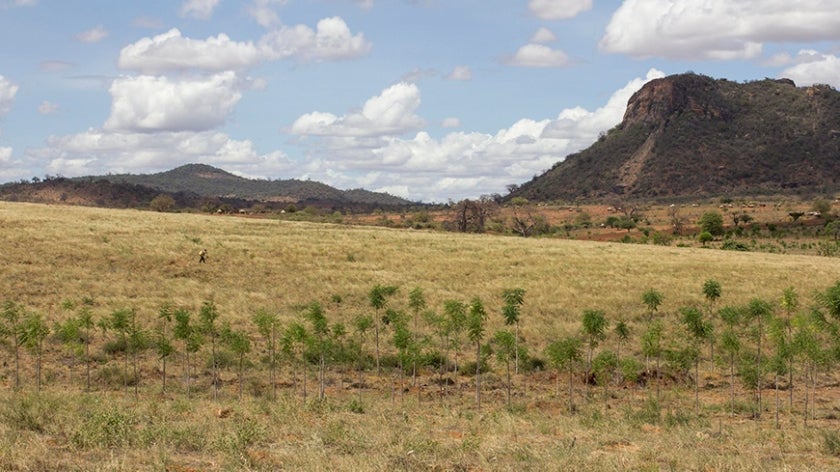 Nature may be a bad enemy, but it is also a good friend. If humanity exploits it, the natural world can take revenge. By contrast, working with nature pays back many times over.

Such were the conclusions of a session at the World Conservation Congress bringing together senior leaders from three countries on different continents – Pakistan, Kenya, and Costa Rica – to describe the benefits of their work to restore land.

The session at the Congress – held by the International Union for Conservation of Nature in Marseille - focused on the Restoration Initiative, the largest ongoing landscape restoration program financed by the Global Environment Facility.

The five-year initiative – which spans 11 projects around the world and is supported by $59 million in grant funding from the GEF, with another $200 million in co-financing – aims to foster innovation and integration as part of the Bonn Challenge, which commits to restoring 350 million hectares of land by 2030.

Malik Amin Aslam, Federal Minister and Adviser to the Prime Minister of Pakistan on climate change, told participants how his country was planting 10 billion trees, with a wide range of ecological, economic, employment, financial, and even political paybacks.

“We set out on this journey in 2014,” he said. “The first target we set for ourselves, which at that time was a very big one for us, was to plant one billion trees in one of our provinces. We achieved that target in 2018, and the most important lesson we learned was that when you put your trust in nature, it always pays you back.”

Now the 10 billion trees were being planted in seven ecological zones from the mangroves in the south of the country to the alpine forests in the north.

It had proved important to work with local communities. People from them were appointed “nature protectors” to look after the forests and were paid the same as government guards. There was particular focus on involving women and the young. And they found that it was cheaper and more effective to assist natural regeneration of trees than to plant new ones.

“You involve the communities. You protect nature and allow it to come back. It does so with astounding speed. We set aside 22 billion (Pakistani) rupees for the billion-tree project but ended up spending only 14 billion to reach our target, because nature became an ally rather than an adversary. You get lots of paybacks.”

These were not just environmental, he explained. The billion-tree project created half a million jobs, and the resulting pay boosted the economy. And success had raised finance. The World Bank had provided funding to help Pakistan focus its post–COVID recovery on nature protection and green jobs, and its first green bond had been oversubscribed six times over. And there had even been a political dividend for the governing party, as it was seen to be going green.

Mohammed Elmi, Deputy Minister of Environment and Forestry in Kenya – which is planting two billion trees by next year – also spoke of natural regeneration and the importance of community involvement.

He described how his country – 70 percent of which is arid or semi-arid - was committed to restoring 5.1 million hectares of land and how its president had moved forward its official target of achieving 10 percent forest cover from 2030 to 2022.

Some 200,000 green jobs have been created in Kenya to date and companies were being encouraged to adopt land for restoration and schools were involved. By law landowners had to plant trees over a tenth of their holdings and communities were receiving income from sequestering carbon in mangroves and grasslands.

Elmi continued: “It works well when communities are involved, and they see the benefits directly. For real sustainability we need to go beyond projects to change the mindset of our populations.”

His experience as a three-times minister of the environment in Costa Rica – which decades ago had destroyed most of its watersheds and was forced by land degradation and the impact on livelihoods to start restoring its landscapes - had shown him that this could be an impetus for economic growth.

“In 1985, when I was 25 years old, we were left with just 22 percent of the original forest in Costa Rica. Today 54-55 percent of our territory is forested. We were able to double the size of our forest cover at the same time as our economy tripled and our population doubled.”

Now the country is committed to achieving 60 percent cover by 2030, without competing with where it produced food or energy or where its people lived.

People in Costa Rica are being paid to sequester carbon, conserve biodiversity, and produce water services at a rate matching the opportunity cost of cattle ranching. This was made possible by a tax levied on fossil fuels from 1997 which now generates $32 million a year.

“In Costa Rica we learned that if we give a hand to Mother Nature, she will restore the ecosystem quicker and cheaper than we can imagine. It can be the same in other places and different biomes.”