Peru was one of the first countries to set climate adaptation goals as part of its climate change commitments, known as Nationally Determined Contributions or NDCs. These commitments enshrined in the Paris Agreement of the United Nations Framework Convention on Climate Change (UNFCCC) are the pathway through which countries are working to limit the increase in global average temperatures and to foster resilience against the effects of climate change.

An adaptation project underway in the Andes, supported by the Global Environment Facility, the GEF-managed Special Climate Change Fund, CAF – the development bank of Latin America, and CONDESAN – the Consortium for the Sustainable Development of the Andean Ecoregion, in partnership with the environment ministries of Bolivia, Colombia, Ecuador, and Peru, is helping to turn these commitments into reality.

The Andes Adaptation to the Impacts of Climate Change on the Water Resources Project (AICCA) started in 2018 and is establishing a route for the fulfillment of Peru’s climate goals. It focuses on sustainable agriculture, with the incorporation of climate risk management in irrigation investment projects. One of the project’s first activities involved multi-stakeholder, multi-sectoral discussions to build alliances, understanding, and agreement around national climate action. In support of this, AICCA provided technical assistance to the government in the development of the Framework Law on Climate Change and its regulations. 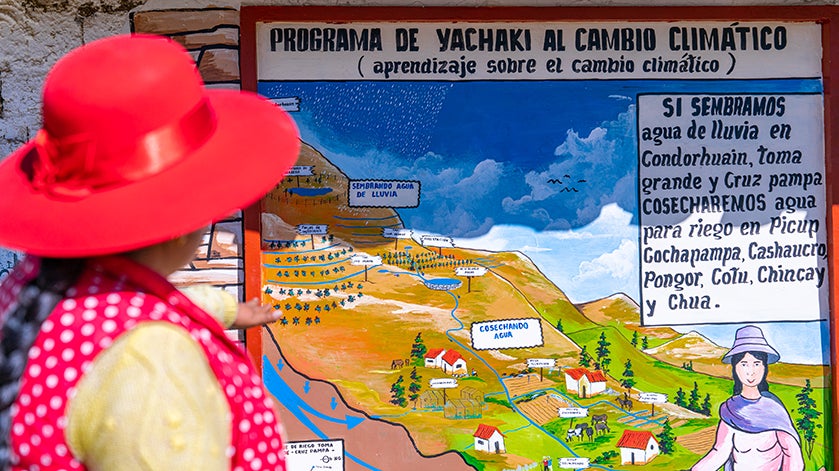 Specific gaps and actions required to increase the area’s adaptive capacity were identified through this process, which also flagged enabling conditions that could allow for the climate adaptation goals to be met. These included improved climate information, regulatory adjustments, institutional arrangements, identification of financial sources and incentives, public awareness, capacity building, among others.

Additionally, advances were made in the reporting and monitoring of adaptation measures to climate change as an integral part of Peru’s National Adaptation Plan along with a strong focus on gender, intergenerational, and cultural inclusiveness. The country is aiming to integrate these approaches in the implementation of its adaptation plan, which means considering the different realities of men and women and people of different ages as well as the languages, values, and visions of the diverse cultures that live in Peru.

In the implementation of the AICCA project, this is reflected, for example, in the execution of specific training on gender issues with the technicians involved in the project, in the development of a training program in Quechua using local radios because it is the only medium that some communities can access, and in cultural diversity being reflected in outreach about the project including a specially developed song highlighting the need to care for water in times of climate change.

As an important component of the climate-resilient irrigation work, AICCA has supported the government's efforts to increase coordination and collaboration across institutions and areas related to climate change adaptation, including the Ministry of the Environment (MINAM), the Ministry of Agrarian Development and Irrigation (MIDAGRI), and other national, regional, and local bodies.

A key part of the project was the application of a climate risk model for the agricultural sector in three regions: Áncash, Cajamarca, and Piura. An analysis of climate hazards to the irrigation systems in these areas was conducted and historical data on precipitation and temperature from the National Meteorology and Hydrology Service (SENAMHI) was studied to understand climatic trends that may be relevant to the development of irrigation infrastructure projects. To make this data widely available, the project developed a web app (TENDHIS) integrating climatic data that is accessible to the public and those working on public investment projects.

Through these experiences and tools, the AICCA project has influenced the incorporation of climate risk management in Peru’s public investment processes related to the development of irrigation projects nationally. Specifically, a technical sheet that stresses the need for measures to adapt systems to the dangers associated with climate change was included in these processes. In addition, an economic evaluation study that compares the cost of implementing versus not implementing climate change adaptation measures in irrigation projects was conducted, together with a pilot climate finance strategy for the implementation of adaptation measures in the agriculture and irrigation sector. 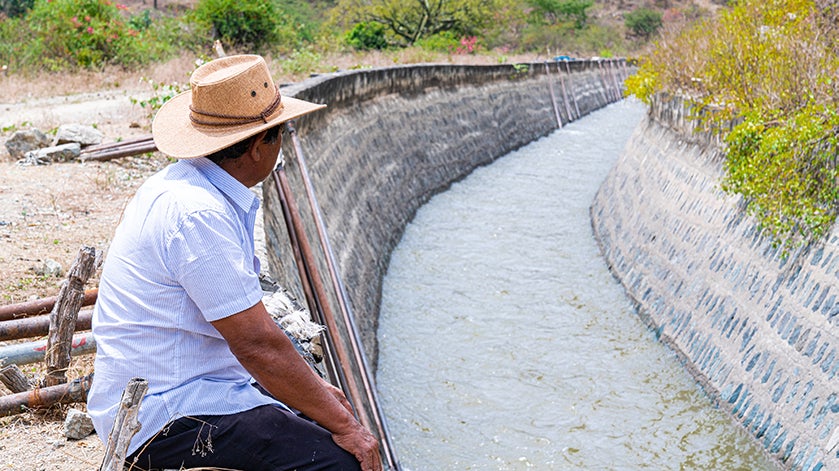 Finding a way to advance Nationally Determined Contributions involves pioneering work across sectors, institutions, and communities, on many fronts. Peru, with the support of AICCA, is making steady progress in turning its climate adaptation goals into reality in the strategically important irrigation sector, whose sustainable development is benefiting smallholder and low-income farmers and their families. It is an example of the wide benefits that integrated, coordinated action on climate resilience can bring.