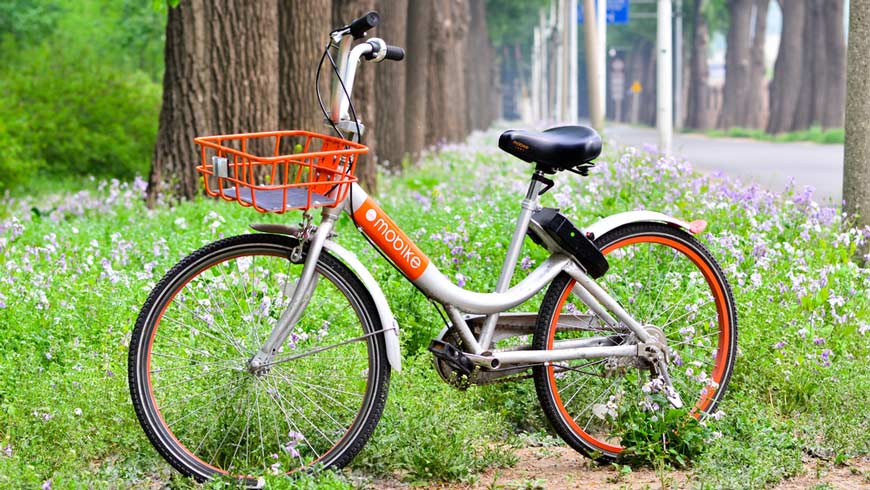 Bikesharing has changed Chinese urban residents’ mobility habits – people take 55 percent fewer trips by cars, and illegal motorcycles that used to provide ‘last-mile’ transportation solutions have been reduced by 53 percent. Every shared bike is a valuable data source that can help us to better understand urban residents’ behavior and to plot a zero-carbon path for not only Chinese cities, but cities around the world as they begin to adopt this technology. Photo: tangxn/Shutterstock.

Digital technologies have spread rapidly in much of the developing world. However, the development and environmental benefits from using digital technologies are yet to be fully captured. The GEF launched the Sustainable Cities Integrated Approach Pilot in 2015. A key characteristic of the program is innovation – leveraging the latest in technology and connectivity to make better decisions and achieve the urban aspirations of its residents.

The first U.S. city to host a docked bike-share system, Washington, DC, is now home to a rapidly growing influx of dockless bikes, with five companies vying for the market. The docked system still accounts for 87 percent of the shared bikes in the United States, but the number of dockless bikes—which can be located by riders using an app and then left anywhere—is growing rapidly. The data from these location-enabled bikes provide a unique opportunity to measure the point-to-point transportation needs of millions of people in some of the world’s densest cities.

In China, where dockless bike sharing began, shared bikes are now the third major mode of public transit. MoBike and Ofo, the two major Chinese bike-sharing companies, each has more than 7 million bikes in operation in more than 170 Chinese cities. Chinese cities’ high density—approximately 100,000 people per city block—makes every street corner a possible bike hub, with many sporting 20-30 bikes available at any one time. Furthermore, low-cost labor provides regular redistribution and maintenance.

China’s bike-sharing revolution is not only transforming the look and dynamics of its cities; very soon, the data acquired from shared bikes will also transform how Chinese cities are designed. The location-enabled “Internet of Things” (IoT) tracks each bike’s movement from the moment it is unlocked until it is finally locked, generating multiple terabytes of data every second. MoBike is partnering with seven Chinese cities – Beijing, Tianjin, Shijiazhuang, Ningbo, Nanchang, Guiyang, and Shenzhen – to use their data for evidence-based urban planning, fill in public transit gaps, and facilitate intelligent transport dispatch.

While Washington’s Capital Bikeshare already provides a plethora of data (open source and accessible to the public), dockless bike systems could collect much more—and at a more granular level. With new standards for sharing open-source data, all information from different companies can be aggregated and analyzed. China’s experience can offer lessons for urban planners and city managers on how to use this data in Washington, D.C., and other U.S. cities.

Bike-sharing data is a real-time expression of each city’s density and the transportation dynamics between where people live and where they work. Nanchang, the relatively small capital of Jiangxi Province with seven million people, is constructing two new metro lines. The ridership data provided by MoBike is informing land use and infrastructure plans around the metro stations. The five locations with higher bike ridership will host denser urban development, featuring mixed-use buildings. Since shared bikes extend each station’s service radius from a 10-minute walking distance of 0.8 kilometers to a 10-minute, 3-kilometer bike ride, they allow more development in areas farther from metro stops, capturing greater land value.

In the summer of 2017, Chinese internet giant Baidu published a report mapping and analyzing the blind spots in public transportation—locations with no public transport within 500 meters—in Chinese cities. The yellow dots in the map on the left mark Beijing’s public transit blind spots, which affect more than 50 percent of Beijing residents. Based on this data, MoBike provided targeted services to help cover these blind spots; the center map marks MoBike coverage in red. The final map (far right) shows how MoBike helped reduce the public transport gaps in a large area of Beijing.

Combined bike-metro-bike trips account for nearly 50 percent of ridership in most Chinese cities. In Shanghai and Beijing, 51 percent and 44 percent of shared bikes, respectively, are used near metro stations. The two figures below show hourly bike ridership at Ningbo Gulou Metro Station on weekdays and weekends. On weekdays, the morning rush hour lasts from 8 am to 10 am, peaking at 9 am. The afternoon rush hour lasts longer, plateauing rather than peaking like the morning rush, and both morning and afternoon rush-hour ridership is four times greater than off-peak ridership. Comparatively, ridership over weekends is smaller, with a 5-hour plateau in the evening.

With this information, Ningbo Metro System dispatchers can provide targeted, on-demand services to meet the fluctuating ridership. Before this, metro services over weekends were infrequent due to a lack of understanding of citizens’ weekend travel needs. With the new data from the bikes, the frequency of metro services have been increased during weekend rush hours and scaled back in off-peak hours. This data, therefore, not only helps bike companies redistribute bikes to the locations with high ridership, but more importantly also helps public transit dispatchers adjust other transportation services to meet fluctuating demands.

While bike sharing has great potential to assist cities’ data-driven design and management, problems with the dockless solution should not be ignored. Riders sometimes carelessly abandon bikes along streets and in parks, blocking metro entrances, creating traffic, and narrowing sidewalk space. Such problems have raised questions about Chinese manners and civic responsibility. To tackle the problems, MoBike has designed a point system to punish misbehaviors like random parking, and government officials have begun to establish bike-parking restrictions, especially along crowded streets.

Overall, however, the benefits of shared bikes greatly outweigh these problems. Bikesharing has changed Chinese urban residents’ mobility habits – people take 55 percent fewer trips by cars, and illegal motorcycles that used to provide ‘last-mile’ transportation solutions have been reduced by 53 percent. Every shared bike is a valuable data source that can help us to better understand urban residents’ behavior and to plot a zero-carbon path for not only Chinese cities, but cities around the world as they begin to adopt this technology. With this data we can track the impact of a single bike: Since its first day on the road one year ago, 1975 people have taken MoBike number 0210019836 for 2021 rides—and thus reduced the equivalent of 6062.5 metric tons of carbon emissions or 1,290 cars taken off the road for a year. The potential benefits brought by bike-sharing to the world have yet to be unlocked—or undocked, in this case.