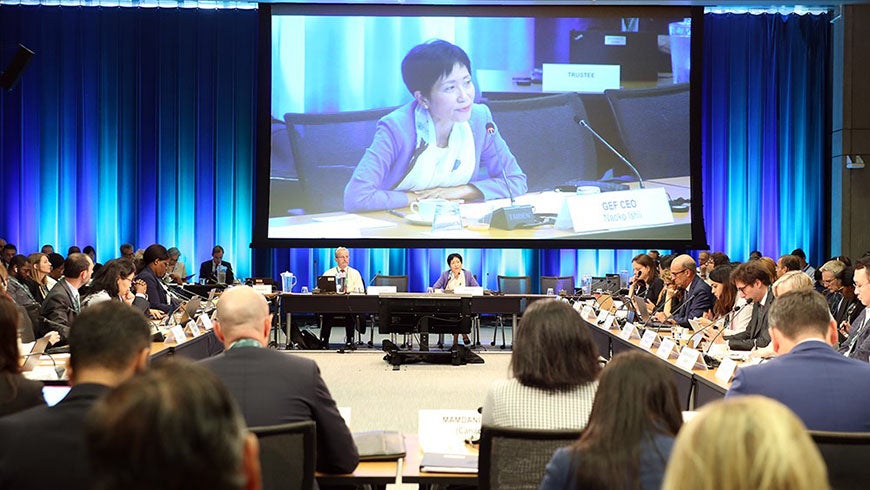 Opening the 56th GEF Council, GEF CEO and Chairperson Naoko Ishii said: “Science provides us with the crystal-clear message that the natural world is under attack. We humans have pushed the carrying capacity of the planet to its limits. Unless we urgently change the way we live, we will lose the favourable Earth conditions that are the very foundations of our own prosperity.” Photo: IISD/ENB | Francis Dejon.

Humanity may be facing its “last chance” to save the Earth's natural environment and its own prosperity, Naoko Ishii, the CEO and Chairperson of the Global Environment Facility (GEF) told governments today.

She told the GEF's 56th Council meeting, in Washington DC, that challenges were “becoming bigger and bigger”, but that the world's ability to address them was “also becoming stronger”, presenting “an historic opportunity to come together to make a difference”.

Opening the Council, she said: “Science provides us with the crystal-clear message that the natural world is under attack. We humans have pushed the carrying capacity of the planet to its limits. Unless we urgently change the way we live, we will lose the favourable Earth conditions that are the very foundations of our own prosperity.”

She cited recent reports by the Intergovernmental Panel on Climate Change which concluded that “we have only 12 years to bend the curve” on rising greenhouse gas emissions and by the Intergovernmental Science-Policy Platform on Biodiversity and Ecosystem Services which showed that “out of the eight million plant and animal species on Earth, one million are threatened with extinction”.

UN Environment's Global Environment Outlook had warned that “a major extinction event” is unfolding she said, “compromising planetary integrity and Earth's capacity to meet human needs.” And the Global Chemical Outlook had documented how large quantities of hazardous chemicals and plastic waste continue to be released.

She added: “The challenge we are facing is not 'only' climate change. A much broader series of challenges – including, for example, biodiversity loss, marine plastics and the circular economy – have been pushed to centre stage”.

But, she went on, “The good news is that the momentum to respond to these challenges is also growing” among governments and at intergovernmental meetings. Coalitions were emerging among business governments, civil society organisations (CSOs), and academia, while alliances of mayors were working on sustainable cities.

The GEF, she said, had been evolving its strategy, shifting focus form the symptoms, to the causes or drivers, of environmental degradation - and making transformation and systems change the centrepiece of its efforts.

She said that the work program to be considered by the Council – the largest in the GEF's history - “directly addresses the need presented by the recent scientific reports for transformational change in key economic systems. And the Council would also continue to strengthen the GEF's institutional framework.”

She added: “We have more scientific knowledge and know more about what works and what does not. We have more champions in governments and the political sphere and among business leaders, CSOs and communities. We need to capitalise on this momentum.”

Next year, 2020, she said would be a “super-year” with key conferences on climate, biodiversity and oceans. “This may be the last chance to change the course.”

She said that the Council meeting “presents a great opportunity to reflect on the huge challenges we are facing and what we can do to address them.”

Reflecting on what will be her last year as GEF CEO, she added, “I am very pleased with what we have accomplished so far, but I am also absolutely clear that there is no room for complacency.”

“There is still a lot to be done, and I look forward to putting all my energy into that in the coming year, together with you.”