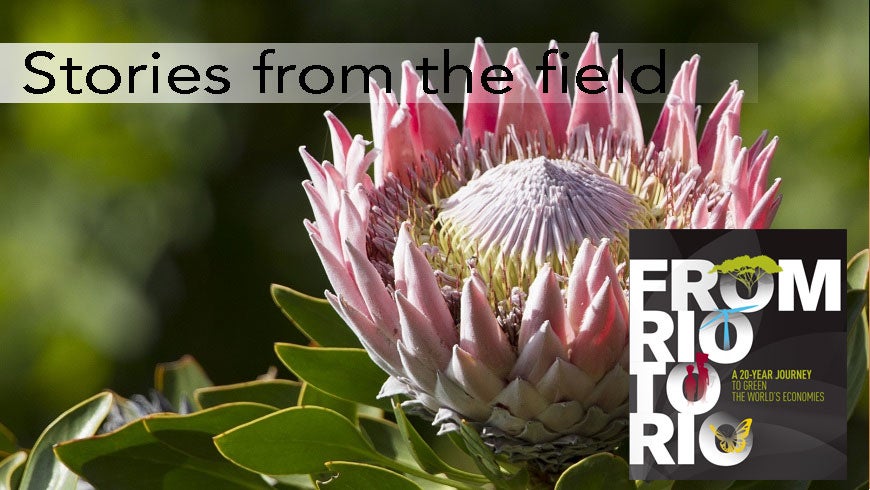 This project brought together private landowners, rural communities, government agencies, and both national and international organizations to tap into new markets sustainably-grown flowers in order to protect landscapes in an economically viable way.

The annual Chelsea Flower Show in London draws thousands of flower lovers from around the world who stroll through showy displays and arbors reveling in the orderly exuberance of the English country garden.

This century-old tradition would seem an unlikely stage for the innovative conservation and use of South African biodiversity. Yet this is precisely what attendees of the show walking the grounds of the Royal Hospital, Chelsea, encountered in the spring of 2011.

In May, 2011, the judges at the flower show awarded a gold medal to a South African exhibit of stunning plants picked from the Agulhas Plain and other areas in the Cape Floral Kingdom. This global center of plant diversity overlooks the junction of the Atlantic and Indian Oceans at the southernmost tip of Africa. The flowers and plants in the exhibit—which included the colossal King Protea, with blossoms nearly a foot in diameter, and other species representative of the unique South African ecosystem known as fynbos— were picked according to a new set of standards designed to ensure a sustainable harvest of these natural treasures.

The gold medal highlights the increasing emphasis that global consumers are placing on sustainability. In an effort to translate that interest into tangible progress for biodiversity conservation and rural development, the GEF and the United Nations Development Programme (UNDP), supported the South African government in the creation of the Agulhas Biodiversity Initiative (ABI). This project brought together private landowners, rural communities, government agencies, and both national and international organizations to tap into new markets sustainably-grown flowers in order to protect landscapes in an economically viable way. The objective of ABI was to convince landowners, private businesses, and local communities that biodiversity—if managed and used sustainably—will provide economic benefits in the long-run comparable to that of the conventional and unsustainable alternatives, such as cattle and sheep ranching, or wheat farming.

The Agulhas Biodiversity Initiative, a broad effort to improve conservation and sustainable use in the Agulhas Plain, is one of three complementary GEF initiatives in support of the Cape Action for People and the Environment (CAPE) partnership program, jointly supported through the World Bank and UNDP, and coordinated by the South African National Biodiversity Institute. GEF financing in the Cape Region is aimed at strengthening the ability of individuals, institutions, and government to test and carry out new types of conservation and development in a variety of ecological and socioeconomic conditions.

The CAPE Programme seeks to conserve the biodiversity of the Cape Floral Kingdom while creating significant social and economic benefits. This region is the smallest and richest of the six floral kingdoms in the world, and the only one to be found entirely within one country. In an area of just nine million hectares the Cape Floral Kingdom contains over 9,000 species of plants, nearly 70 percent of which are found nowhere else on earth. More than 1,400 species in the Cape Floral Kingdom are listed as being critically rare, endangered, or vulnerable, and at least 29 species have already become extinct.

The rich biodiversity of the Cape Region provides for a multitude of essential ecological services and livelihood opportunities. However, over 80 percent of the 275,000 hectares of the Agulhas Plain is privately owned, so any strategy for the conservation of this rich biodiversity needs to include local communities and especially the landowners and land users.

With national partners, including South African National Parks (SANParks), the GEF and UNDP launched ABI to explore innovative ideas and to secure the Agulhas National Park, which was created in 1996 and is the largest protected area in the vicinity. The Park, like much of the region, had been invaded by exotic plants which were choking out the native fynbos and leading to catastrophic wildfires. Under ABI, land managers tested new methods of clearing and containing these invasive and highly combustible alien species. Most importantly, ABI gave its partner organizations the chance to work with private landowners and disenfranchised local communities to find economic benefits in the sustainable use of the biodiversity of the Agulhas Plain.

An important step came in 1999, when a 530 hectare farm in the Plain called Flower Valley was on the verge of being sold and potentially converted to vineyards, which would have wiped out another parcel of native fynbos. Instead, Flora & Fauna International intervened to buy the land, and donated it to the newly created Flower Valley Conservation Trust. Flower Valley Farm became a testing ground for new methods for meeting the challenges of ecologically, economically, and socially sustainable use of the fynbos biome.

ABI and its partners, including the Trust, recognized the need to strengthen the scientific basis for sustainable harvesting, to promote social responsibility and compliant production systems, and to develop markets to manage sustainable fynbos flower products such as bouquets. Ultimately, through this work and the resulting economic incentive, the harvesting of fynbos has become an important conservation mechanism in the region. The Code of Best Practice for sustainable wild harvesting is now complete, along with a vulnerability index for 71 harvested species and 79 species with harvest potential (only 150 of some 2,000 species are commercially harvested). Seven suppliers have been trained and certified to sell flowers, and a formal national certification system is now in the making.

In its early years, the Trust, as a non-profit organization, struggled with complex commercial challenges such as linking flower pickers and property owners. In response, in 2003 the Trust and private investors created an independent for-profit company called Fynsa to handle the commercial matters and to find markets for sustainably harvested wild fynbos purchased from certified suppliers.

Aligning the goals of a start-up, for-profit business with developing new ethical and ecological sustainable approaches posed some serious challenges. Nevertheless, Fynsa struck a deal with the European retailer Marks & Spencer and supplied the luxury retailer with over 330,000 bouquets in 2006. More recently, Fynsa completed a similar agreement with Pick ‘n Pay, a large supermarket chain in South Africa, and is now in the process of expanding to include other South African retailers and another major retailer in the UK. The deal with Marks & Spencer has provided Fynsa with a steady, reliable demand for its fynbos bouquets, increasing employment and providing a year-round income. Fynsa now buys flowers from harvesters working on private lands covering over 30,000 hectares, and the income and steady market provides an incentive for the private land owners to conserve biodiversity.

Through stewardship agreements with landowners and the expansion of the Agulhas National Park, ABI helped to secure the protection of 102,000 hectares, or 37 percent of the Agulhas Plain. At least 40 percent of this surface area is on privately owned productive landscapes, reinforcing the important role of the agricultural sector to conservation. By the end of the project, the area of properties harvested by certified suppliers was expected to double to 120,000 hectares

The Flower Valley Programme demonstrates that biodiversity can be an economic resource, but it did not work exactly as planned. The Programme began with the assumption that green certification would show consumers that a particular product has been produced in a sustainable way and thus would justify a premium price on the flowers of Flower Valley. Consumers, however, have not shown a willingness to pay more for certified flowers, so retail chains are not willing to pay suppliers more, either. For wild harvested fynbos, at least, the value of certification appears to lie not in price premiums but in preferential market access and yearround demand. While the project has been unable to secure premium prices for sustainably harvested fynbos flowers, it has secured a direct market with major retailers, reducing payments to middlemen and increasing returns to farmers. These direct markets would not have materialized without the sustainable production and verification systems developed under the project.

In another unexpected turn, despite progress made in the development of a system for certifying fynbos harvesters and securing certified markets, the Flower Valley Programme has not demonstrated that wildflower harvesting is viable as the sole land use for landowners in this area. Rather, it has shown that there is value for the landowner in holding on to virgin fynbos land for harvesting as a complementary land-use option in a mixed farming enterprise.

The partners of ABI continue to work on ways to address the troubling question of how to make biodiversity part of the economic foundation for the Cape and indeed all of South Africa. The project made great strides towards a biodiversity economy through the Nuwejaars Wetland Special Management Area, northeast of Agulhas National Park, with financing secured from the Government of Germany’s International Climate Initiative. There, 25 private landowners and the community of Elim made binding commitments to conservation management of their land. They are finding new ways to protect the ecologically important Nuwejaars Wetland while retaining their farms and ranches. The community has undertaken collective action to remove invasive alien species, restore natural fire regimes, rehabilitate wetlands, and reintroduce wildlife—including buffalo, a species not seen in the region in two centuries, and hippo, missing from the area for 150 years.

This development of stakeholder-driven collective action is a new form of conservation in South Africa. Devolved, collective landholder conservation is a powerful idea. It provides enormous advantages, including the management of landscapes over much larger areas, economies of scale, the control of unsustainable activities through peer pressure rather than prohibitively expensive and unwanted top-down regulation, and greater efficacy of service delivery. This model is ideally aligned to South Africa’s need to expand conservation onto private and communal land. The project’s work in Nuwejaars is demonstrating how collective landholder action can transform land use practices, creating approaches that are more dependent on sustaining biodiversity, eco-tourism and carbon- and energy-neutral production.

The challenges for efforts like ABI and, more broadly, the CAPE Programme are clear. South Africa’s national and provincial parks are threatened by landscape processes that extend far beyond their boundaries. The future of the parks thus depends on an equally broad approach to conservation, one that emphasizes connectivity across the landscape, particularly in the face of climate change and economic globalization. Protected areas must be both ecologically and economically viable, and that will require far deeper understanding of conservation economics and governance.

In light of these challenges and to address the growing isolation of parks, ABI partner SANParks developed a draft buffer zone policy. According to Tertius Carinus, Project Coordinator of the SANParks Cape Region Buffer Zone Project, “ABI provided a solution on how the management [of protected and productive areas] can be linked. We, as the ABI related staff, have now been taken up in SANParks as part of the “new” Buffer Zone approach in SANParks. This new approach gives SANParks a policy mandate to work off-reserve,” which will reduce the threats to the ecosystems in both the protected reserves and the productive areas.

An economy based on the economic management of public goods and environmental services like water, aesthetic values, and carbon does not yet exist in South Africa, or just about anywhere else. Yet ABI and the CAPE Programme are important tests of new models of conservation beyond protected areas and of linkages between state and private conservation. Such efforts are vital demonstrations that biodiversity protection, income generation, and job creation can be complementary aims.