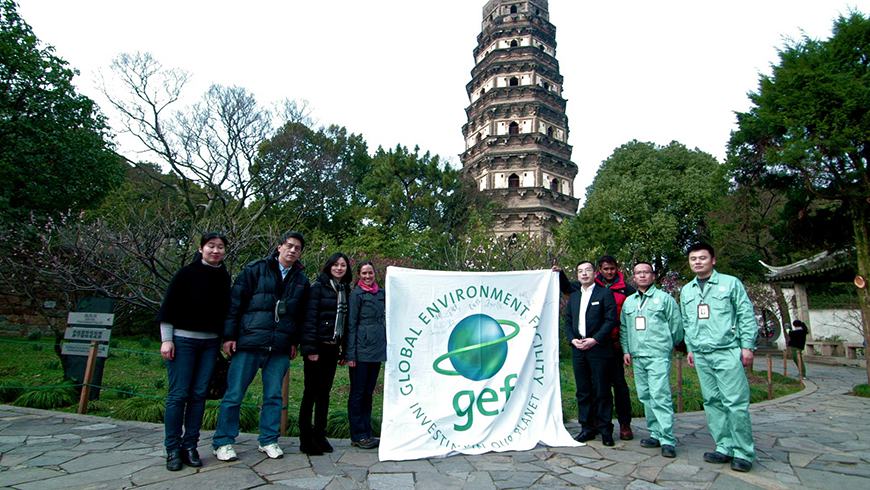 GEF and project staff stand in front of a pagoda at Suzhou’s Tiger Hill, which was a demonstration site using safe alternatives to Mirex and Chlordane to prevent termite infestations and protect cultural heritage sites. Since 2009, China has banned production of toxic chemicals, including Mirex and Chlordane, which had previously been the preferred method of pest control at such sites.

Everything from the food we eat, to our homes and buildings, and even our health, is under attack from pests.  Pests not only cause economic loss, but also can transmit diseases.  In our attempt to keep these pests at bay, we have developed an arsenal of pesticides, which are highly toxic chemicals.  Some of these fall into a group of chemicals that are regarded as the most harmful due to their severely adverse and long-lasting impact on human health and the environment.  This group of chemicals, the Persistent Organic Pollutants (POPs) are controlled by the Stockholm Convention.

The GEF has provided assistance to countries to phase out a number of these pesticides. In the most successful cases, these chemicals were replaced by less toxic chemicals, or by non-chemical means altogether through the use of integrated pesticide management and integrated vector management methods.  These methods not only ensure that the pests can be eliminated, but that our health and the environment are protected from these chemicals.  Our exposure to chemicals comes from the food and the environment, so that in phasing out other POPs pesticides such as Endosulphan and Lindane, it will be important to learn from the success of projects that go to non-chemical options.  Some examples of these are the phase-out of Mirex and Chlordane, pesticides used to control termites in structures, the phase-out of Dicofol, used for pest management in citrus, apples and cotton, and lastly, the phase-out of DDT, used to control the malaria vector.

China is home to more than 450 species of termites, and the damage that these pests can do to critical urban infrastructure, like homes and schools, has immense economic consequences.

For nearly three decades, China used Mirex and Chlordane to protect infrastructure and historic sites from termites, Cost-effective and safe alternatives were simply not available. These two chemicals, which are both POPs (persistent organic pollutants), ended up becoming the backbone of the Chinese termite control industry.

However, health and environmental considerations, along with the country’s commitments under the Stockholm Convention, led China to decide to control termites without Mirex and Chlordane and stop the production of the two chemicals. Supported by a GEF/World Bank project, various approaches to integrated pest management (IPM) were demonstrated in an area of more than 100 square kilometers in the provinces of Anhui, Hunan and Jiangsu.

Suzhou’s Tiger Hill was one of many demonstration sites. A national IPM specialist explains that termite bait traps are used as a cost-effective way to indicate the presence of termites. “Instead of spraying large areas with Chlordane and Mirex, now a small amount of a safer termicide is sufficient to control termites, keeping structures safe without harming human or environmental health.”

The demonstrations proved very successful and, as a result, China banned the use of Mirex and Chlordane altogether in 2009 and began the dismantling of production facilities. Replication of project successes resulting in the elimination of Mirex and Chlordane use across the whole of China is now underway, supported by over 5,000 extension officers and pest control professionals who were trained in IPM as part of the project. 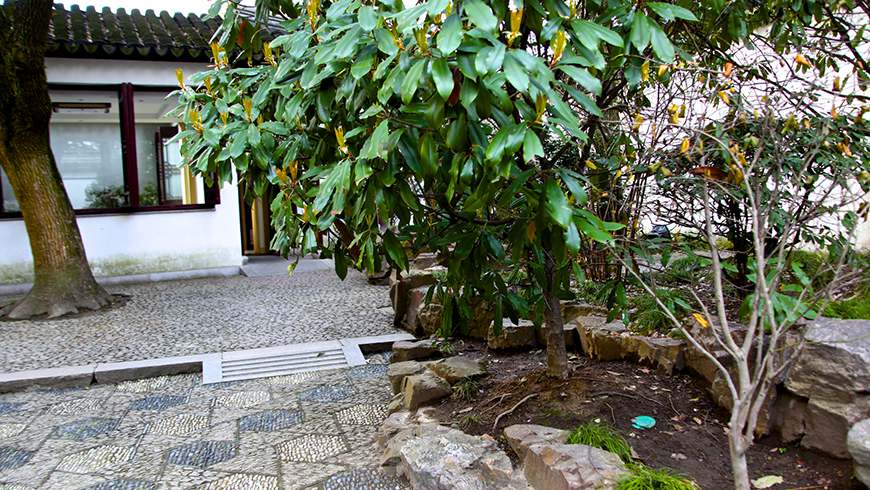 Dicofol is currently not listed as a POP by the Stockholm Convention. However, its production requires the use of one of the better-known POPs - DDT.  In China, which produced Dicofol for the elimination of lead mites that plagued crops ranging from apples and oranges to cotton, a UNDP/GEF project helped to develop and implement an integrated pest management system to control the pests, which also allowed for the closure of the production of Dicofol, thereby eliminating the need for DDT.

The project implemented biological control measures developed domestically in China to replace the chemical’s use.  This, along with other improvements to local farming methods, not only eliminated the chemical’s usage, but also improved productivity and attractiveness of the products to the growing global ‘organic’ markets.  The elimination of the need to both procure the chemicals and hire labor to apply the chemicals on a routine basis also resulted in significant savings for the farmers.

This story is based on an article that first appeared in GEF's 'The Greenline' magazine.

The GEF is a catalyst for both governments and the private sector to help eliminate or reduce harmful chemicals and waste. The GEF is a financial mechanism to implement both the Stockholm Convention on Persistent Organic Pollutants and The Minamata Convention on Mercury. It also plays an important, complementary role in achieving the Montreal Protocol on Substances that Deplete the Ozone Layer.

The GEF has two key strategic objectives around chemicals and waste:

China acknowledged the GEF for helping phase out Chlordane and Mirex, two POPs used for termite prevention and control

Demonstration of Alternatives to Chlordane and Mirex in Termite Control