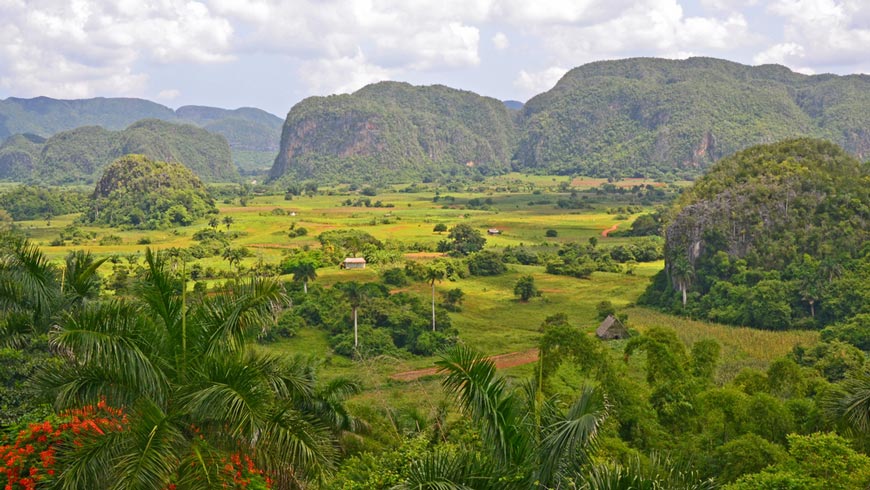 The GEF-funded, UNEP-implemented Country Pilot Partnership Programme is a series of five projects aiming to support the implementation of the National Action Programme to Combat Desertification, reduce land degradation and promote the integrity of ecosystems around Cuba

A new generation of farmers brings productivity back to Cuba’s landscape.

With its tropical beaches and rolling hills, spotted with tobacco plantations and pine forest, Cuba might not be the first place that comes to mind when you think of degraded land. But behind the tourist idyll lies a grimmer reality.

Today, some 14 per cent of the island nation’s productive lands are affected by drought and desertification, while over three-quarters of its 6.6 million hectares of arable land is affected by soil erosion. The result is that Cuba imports 80 per cent of its food necessities at a cost of nearly two billion dollars a year – a heavy burden for any developing country, especially one that continues to suffer an ongoing economic embargo from a major world power.

But human activity is also major factor, with centuries of agriculture having shaped and re-shaped the landscape. In particular, the nation’s former Soviet-influenced agricultural policy focused on large-scale, industrial farming – mostly of sugar cane, which still occupies as much as half of Cuba’s productive land. This history of monoculture has resulted in compacted fields, nutrient-leached soil, erosion, high levels of salinity and depleted aquifers.

In a country hard-hit by climate change, with increasingly frequent periods of drought, erratic rainfall patterns and hurricanes becoming both more common and intense, it’s a precarious position to be in – a fact keenly felt by many who remember the crippling food shortages suffered in the wake of the collapse of the Soviet Union in 1993.

During what Castro dubbed the “special period”, Cuba’s sugar industry collapsed as the nation’s main trade relationship dissolved, leading to an 80 per cent contraction in international trade and people fainting in the streets from hunger.

But today, the hardships of years past have given birth to a revolution of a different kind in this communist nation. Widespread reforms of the agriculture industry have opened the way to a new breed of smallholder farmers, as Cubans take advantage of a renewed legal framework (Decree-Law 259: "About the Delivering of Idle State Lands in Usufruct") to claim idle state-owned lands to farm themselves.

But restoring these degraded lands to productivity has proved a challenge in itself. Not only have decades of monoculture affected the health of the land, but as the nation has never had a vibrant smallholder sector – either before or after the 1959 revolution – knowledge on how to sustainably manage the land and maximize its productivity is limited at best.

This knowledge gap has been one of the issues in the sights of the Country Pilot Partnership Programme between the Government of Cuba and the Global Environment Facility, a series of five projects aiming to support the implementation of the National Action Programme to Combat Desertification, reduce land degradation and promote the integrity of ecosystems around the country.

Onay Martínez Díaz is one of over 12,000 Cuban farmers who has leveraged training from the programme to realize his dream of working the land with his own hands to support his family and community.

A former computer scientist, Martínez Díaz was granted 22 hectares of degraded state land, which he has restored to productivity using sustainable land management (SLM) methods learned through the Country Pilot Partnership Programme with the support of UN Environment.

“We took on this challenge with the entire family. When we came here there was nothing but marabu [an invasive plant species],” Martínez Díaz says.

“Applying sustainable land management principles has paid off. It is a lot of work but simple enough to learn and we are seeing the results very quickly.”

UN Environment’s Robert Erath says Cuba’s land reforms and the ensuing growth in smallholder agriculture has produced a generation of famers who are hungry for knowledge on how to sustainably manage their smallholdings.

“In the 90s they were really struggling,” Erath says. “Cuba basically had to reinvent their agriculture system, converting monocultured land from sugar to staple food crops in order to be able to feed its people.”

“But when you come from a culture of big enterprises that run huge machinery and then you try to work the land as a family, you need to know what productive protocols and what land management techniques to use, how to do your planning at that scale, and even what crops and animals to farm.”

“This project has been bringing farmers the ‘how’ – the knowledge and the know-how they need to be successful and sustainable.”

Hard work and the application of sustainable land management techniques have paid off for Onay Martínez Díaz and his family, who have transformed their property from neglected government land to a thriving silvopastoral operation, providing both fresh fruit and meat to the wider municipality.

“We are seeing productivity increase and our neighbours are asking us for advice, which we gladly provide,” Martínez Díaz says. “We have big plans for the future and our children are part of it. They can look forward to better conditions as they grow up and take part in the changes.”

The Capacity Building for Information Coordination and Monitoring Systems/SLM in Areas with Water Resource Management Problems project is the second project of the Country Pilot Partnership Programme between the Government of Cuba and the Global Environment Facility. The project focuses on developing the capacities for applying SLM, with a focus on water resources management.

For more information on the project and UN Environment’s work in land degradation, contact Robert Erath