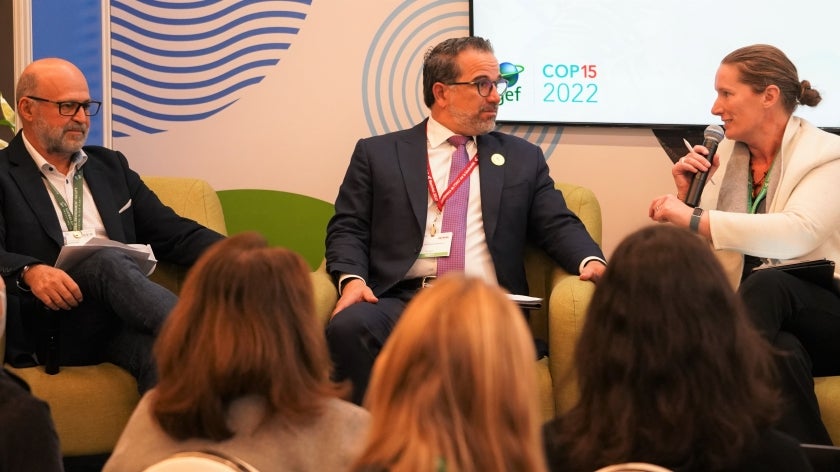 Ecuador is one of the world’s megadiverse countries, is internationally known for its Galapagos islands and marine life.

It is also home to more bird species per square kilometer than anywhere else on the planet, thanks in part to its vast forests spanning coastal, mountain, and tropical landscapes.

These wild spaces – many of them primary forests with special protection from the government – are facing pressure from the same trends driving deforestation around the world – including shifts toward cattle-farming, agriculture, and high demand for wood and paper products.

And for the country where a third of the population lives below the poverty line, and 7 out of 10 people lack formal employment, there are also societal and economic realities at play.

“We have a lot of reasons to conserve our forests and a lot of interest in finding ways to do this,” Ecuador’s Minister of Environment, Water, and Ecological Transition Gustavo Miranda Manrique told a primary forests event during the UN Biodiversity Conference.

“However, it is important to understand something. People deforest not because they do not like a certain tree, or because they want to have a better view,” he told the session hosted by the Global Environment Facility.

Those struggling to support their families often see trees as a source of money for food or immediate needs, which underscores the need to invest in ecotourism, the sustainable use of biodiversity, and related ventures that yield local benefits, Manrique said. “If we fight to create jobs, this will help us stop deforestation as well.”

To this end, Ecuador has launched a novel Payment for Ecosystem Services scheme to assist those living near Ecuador’s rainforests, highland forests, and mangroves.

The Socio Bosque program, supported by donors including Germany, Norway, as well as the Global Environment Facility, pays local people a stipend in exchange for leaving forests intact instead of clearing them to raise cattle, farm rice or corn, or sell wood. These payments are in exchange for the ecosystem services these forests produce like carbon storage, water production, and biodiversity protection. So far, the program has protected 1.6 million hectares of forest, Manrique said.

The high stakes of this effort are clear. Wild Heritage Founder and Executive Director Cyril Kormos described old-growth or primary forests as some of the densest, most ecologically significant places on Earth. They also deliver “a hyper concentration of benefits” for climate regulation, water flows, erosion control, pollination, human health, and more.

“These are forests that have been evolving for centuries to millennia to adapt to the particular environmental conditions in which they are found. As a result of that process of evolution and adaptation over long periods of time, these are the places where you maximize both biodiversity and the carbon in the same place,” Kormos said. He noted that primary forests had not been included in negotiating texts for a new post-2020 global biodiversity framework despite growing recognition that “spending money to protect biodiversity is actually the same thing as spending money to fight against climate change.”

Heike Henn, Director of Climate, Energy, and Environment in Germany’s Federal Ministry for Economic Cooperation and Development (BMZ), stressed the need for more initiatives that shift both practices and mindsets when it comes to wild spaces.

“Germans have quite a romantic relationship to forests and biodiversity, and over the decades that has translated into strong international commitments and strong investment,” Henn told the panel discussion at the GEF COP15 pavilion. “We need more financing and more innovative solutions to keep primary forests intact. Strong policies and frameworks are also very important to get rid of nature-negative investments and financial flows.”

Germany is the top donor to the Global Environment Facility’s current funding cycle, which runs through 2026. Most of the record $5.33 billion raised for GEF-8 will support efforts to prevent further biodiversity loss, including through 11 new integrated programs target the drivers of environmental degradation across multiple sectors and bolster the conservation, sustainable use, and restoration of natural ecosystems. The $357 million Critical Forest Biomes Integrated Program will specifically work to maintain the integrity of primary forests in the Amazon, the Congo Basin, Indo-Malaya, Meso-America, and Western Africa.

Valerie Hickey, Global Director for Environment, Natural Resources and Blue Economy at the World Bank Group, affirmed the need to prioritize environmental and societal priorities together, and not treat them as separate issues. She also stressed the critical role Indigenous Peoples and local communities have played, and will continue to play, in the stewardship of biodiversity hotspots.

“The only reason we still have primary forests is because of Indigenous Peoples and local communities. That means really taking a biodiversity justice approach to everything we do in biodiversity and in primary forests,” she said, welcoming the insights from Ecuador as instructive for all countries facing socio-economic challenges alongside ecological ones. “This isn’t just about solving the climate and biodiversity crises, this is about solving poverty.”

To watch the recording of this event please click here.

To watch and read a summary of this event by IISD/ENB, click here.

The GEF at CBD COP15