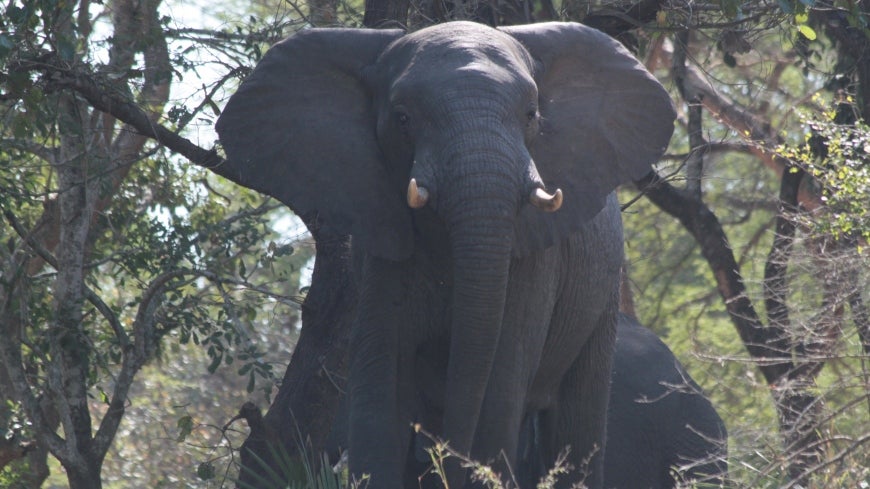 Every few nights, elephants cross the river that marks the boundary of Gorongosa National Park and head into farms just on the other side. Photo: Sarah Wyatt/GEF.

When I try to explain the importance of the GEF when it comes to protecting the world’s biodiversity, I end up with two main arguments.

First, biodiversity is not evenly distributed across the planet. And second, most of the places with the highest biodiversity are also the home of very poor people who can’t be asked to bear the costs of conservation alone. For example,  there are 454 species of birds in Gorongosa National Park alone (an area a bit bigger than the US state of Rhode Island, a bit smaller than Delaware), while the total number of bird species for all of North America is only 914. I can give you more interesting stats like that, but I think it’s better to tell a story.

Mozambique is an “LDC” or Least Developed Country, meaning that it is among the poorest on Earth. The region where Gorongosa is located has particularly suffered as it lies at the heart of the decades long civil war (until recently travel on the main highway was only recommended by an army escorted convoy). For the jobs that do exist, a basic standard wage would roughly be around $50 - $100 a month.  Many people, especially women, survive through basic agriculture - farming corn.

We met Mãe Bendita during our trip to one of the villages surrounding the park. The village is a beneficiary of USAID’s project which helps local farmers adopt more productive agriculture practices. Ms Bendita – a model farmer of the project - teaches other farmers to grow a mix of crops, such as tomatoes, peppers, carrots, that not only have higher value and are more nutritious but also reduce the risk of losing all their harvest to extreme weather events. Our host also introduced us to her helpers – local teenagers who she hires when there is too much work to be done – something that she never would have been able to do before.

Now you may ask where the GEF comes into this picture. Every few nights, elephants cross the river that marks the boundary of Gorongosa National Park and head into farms just on the other side. Elephants eat the crops that these farmers have worked hard to grow and depend on to feed their families. Elephants don’t carefully pick an ear or two of corn - they destroy the whole plant. As a result, sometimes people get hurt – a park ranger was killed by an elephant at night while trying to shoo the elephants back into the park to protect villagers’ crops, homes and lives. In other places scared and angry elephants have killed people protecting their crops. And that puts park elephants and the surrounding communities in conflict.

At the same time, these communities are the first line of defense against poachers. The people know who is going into the park to hunt, whether it is some local teenagers or outsiders from far away. It is extremely important for the park’s conservation efforts to have the villagers on their side.

The park is home to many antelopes in addition to elephant tusks that are worth a year or more salary. To make it clear just how valuable even a simple impala or other antelope is - poachers don’t eat what they hunt, they sell it for other food like corn. But now, the conservation success of the park, a growing elephant population, is a burden for those who live nearby and are already barely surviving. If elephants are a threat to these people by raiding and damaging crops and homes and even hurting people, we can’t expect those same people to be partners in fighting poaching and protecting the park - no matter how much they like elephants or the park.

Part of the GEF project includes building a fence between the community and the river, helping to keep elephants out of the farms. Because determined elephants can make quick work of most fences, the park will also work with farmers to grow crops along the fence that elephants don’t like, such as chili peppers and kale. Mãe Bendita told us how happy they would be to have the fence to end the fear that comes with regular night time visits from the elephants most of us think of as cute. I can’t help but think of the words of the American poet Robert Frost, “Good fences make good neighbors.”

This fence is one small, but important example of the steps we need to take to fight poaching. Fighting illegal wildlife trade and turning the tide of a multi-billion dollar industry run by criminal gangs and militias can feel overwhelming. Sometimes the victories are big and newsworthy like the recent Chinese government ban on ivory sales. However, sometimes steps to help ensure that elephants roam across Africa forever are straightforward and relatively simple – a fence and some spicy vegetables, because in the end successful conservation is about working with people.

From what I've seen bee fences are very effective and also help the farmers to make a bit of extra money. Perhaps that's the was to go regarding elephants. Incidentally I'm with the elephants regarding kale.

Has anyone thought of beehives? Elephants hate bees, and run away when they hear them. Beehive fences are being used in some places of Kenya and Uganda - which keep bees away and also provide extra income for villagers.