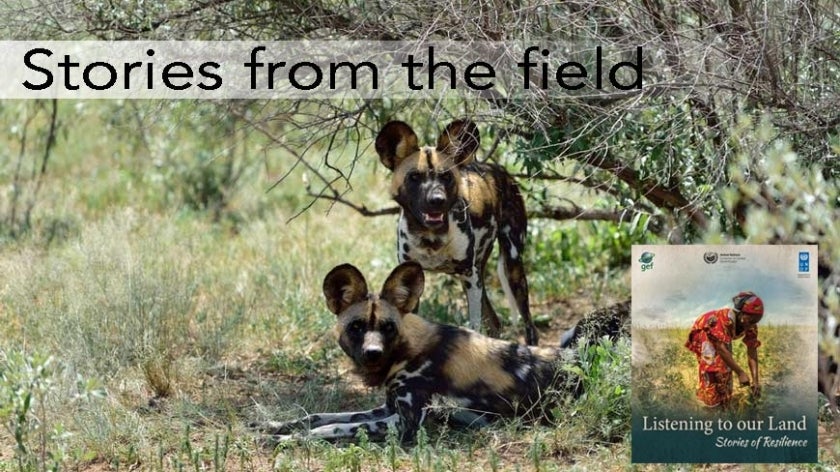 Meet Jaqueline Tjaimi and Rinouzeu Karizembi, the only two women in the nine-member management committee of the African Wild Dog Conservancy, from the Otjozondjupa region of eastern Namibia. Like most people of the Herero tribe, these women are pastoralists – arable agriculture in this region is limited, due to the arid nature of the Kalahari landscape. As young farmers – both women are in their thirties – they hope to one day make a better living from raising livestock, but they are also acutely aware of the constraints presented by the environment, the impacts of livestock on the landscape, and a changing climate.

In the village of Okondjatu, where Jaqueline and Rinouzeu live, land is used on a communal basis, and cattle and other livestock graze on communally-managed rangelands. In the past, elders and traditional leaders demarcated land for different uses, and often set aside grazing land for times of drought, when grass and fodder became scarce. With the erosion of these traditional systems of natural resource governance over time, an open-access approach to land use became common and the impacts are starkly evident – both environmentally and socially. Uncontrolled grazing, increasing herd sizes, and unequal access to rangeland resources, has caused significant degradation of communal rangelands, as evidenced by severe bush encroachment. An invasive thorn tree species called blackthorn (Senegalensis mellifera), is taking over thousands of hectares of land and out-competing the local tree and grass species, with disastrous consequences for pastoralists. Bush encroachment also impacts on scarce water resources, as infiltration of rainwater into the soil and groundwater is reduced on degraded lands.

“These bushes choke up the landscape, and stop cattle from accessing grazing land,” says Rinouzeu. When asked what she thinks causes the encroachment by thorn bushes and what can be done about it, Jaqueline hesitates to link land degradation directly to livestock management practices, but points out, “In my experience, there tends to be less grass if there’s a lot of livestock, especially cattle; and, where the cattle are fewer, the rangelands are much healthier. I think it’s better to sell off some cattle and put the money in the bank, that way you can buy more land elsewhere if you want to increase the size of your cattle herd.”

Striking this balance is a lot more complex than this, as pastoralism and cattle ownership go beyond simple economics – cattle are also a cultural status symbol in Namibia, and men with a lot of cattle are respected as community leaders. Cattle are also considered an ‘insurance policy’, so selling them off for no reason other than to put money in the bank, is hardly an option most pastoralists would consider.

Knowledge and understanding of the interactions between livestock husbandry and land degradation is, however, increasing, and pastoralists like Jaqueline and Rinouzeu are aware that for pastoralism to remain viable as a livelihood, the ‘old way of doing things’, as they say, has to change. Deliberate and urgent action needs to be taken to reduce and avoid the impacts of current land-use practices on the environment.

The response to bush encroachment nationally has been to undertake mechanical clearing of large areas, especially on commercial cattle farms, using the cleared biomass for economically productive purposes. This strategy for restoring and rehabilitating degraded rangelands is, however, an expensive exercise, and tools and technical skills on how to do it properly are limited at the local community level.

Building on the highly successful wildlife conservancy model, the government has invested in establishing Community Forests, and work is under way to harmonize forest and wildlife-based conservancy systems. This includes establishing mechanisms to compensate people for stock and crop losses due to drought, flood, and wildlife damage. The African Wild Dog Community Forest, located in Otjozondjupa region – with a conservancy group of the same name – covers an area of 473,244 hectares. Once the Community Forest has been legally proclaimed, the African Wild Dog Conservancy will have legal control over a much larger area than they do currently (38,192 hectares).

The dry forest resources of the African Wild Dog Community Forest are largely used as communal rangelands for 112 villages and settlements. Much of the area is currently affected by bush encroachment caused by unregulated grazing, and conflict over access to grazing land. Even prior to the legal recognition of the Community Forest, the African Wild Dog Conservancy is working proactively to pilot sustainable land and forestry management practices – the key pilot program is on de-bushing the degraded area and turning the harvested material into fodder for livestock.

“The quality of the rangelands is already improving, so even though at the moment we’re still at a trial stage, it is clear that the potential benefits of de-bushing are great, and once we get official clearance for our Community Forest, we will roll this programme out,” says Jaqueline.

The primary rangeland management practice that the African Wild Dog Conservancy plans to introduce is the regulation and control of grazing. The current practice is such that anyone can demarcate and fence off a portion of the communal grazing land to create an ‘enclosure’ for their livestock, excluding others from accessing and using the fenced area. This has resulted in conflicts over communal grazing land and has marginalized, in particular, poorer members of the community, including unmarried women and poorer men, who lack the financial muscle and political influence to gain control over communal land resources.

“Smallholder farmers like us suffer, because we cannot afford to sell any of our already-few cattle to fence off land for grazing, so during times when grazing is scarce, our cattle die. When the Community Forest comes under our legal control, we will be able to put in place a fairer system for allocating use of our communal rangelands – everyone will have some access to grazing resources. Ensuring fairer access to grazing land might also help persuade cattle owners to rethink the size of their herds, and could be a useful incentive for them to reduce their stock numbers – stock owners with large herds would otherwise have to spend more money on purchasing supplementary feed, as our rangelands are not big enough to support large herds,” Rinouzeu argues.

With the legal declaration of the Community Forest, the African Wild Dog Conservancy will be empowered not only to manage their rangelands more sustainably, but also to implement alternative income-generating initiatives that can create employment and help communities diversify their income streams and reduce their dependency on cattle production. This area is home to the endangered African Wild Dog (Lycaon pictus) – hence the name of the Community Conservancy and the Community Forest. Among the plans for the area is to integrate wild dog conservation into sustainable use and management of forest resources, as part of an eco-tourism strategy and a long-term income-generation plan for the communities in the catchment area.

Capacity building initiatives implemented by the Namibian government, with support from UNDP and the GEF, are key to facilitating the realization of these ambitious plans. “With the knowledge we’re gaining from the nine-step process of establishing the Community Forest, we will become better land and natural resource managers, because we’re understanding how we need to treat our land and the trees and animals on it,” says Rinouzeu – and Jaqueline agrees. These pioneering women envision the African Wild Dog Community Forest as a diversified, communally-managed landscape that supports sustainable use of local natural resources for subsistence livelihoods, and protects biodiversity and wildlife for the benefit of people and the land.