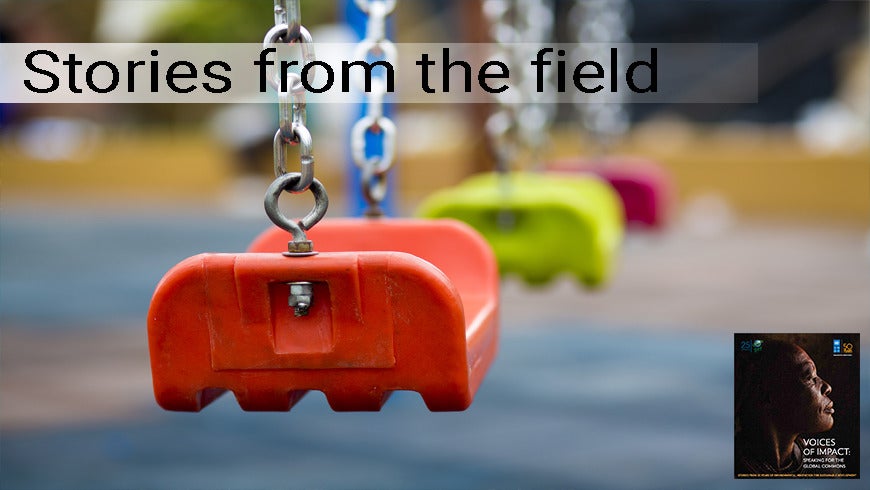 "An electrical post had fallen, and the transformer was hanging off it, broken – it had spilled oil all over the schoolyard. I had no idea that the transformer and contaminated soil presented a health risk to the children and teachers at the school."

“On Saturday 16 April of this year, my town was torn apart by a terrible earthquake – one of the worst that has ever happened here. Everything collapsed, from streetlights to houses; motor vehicles were crushed and, worst of all, was that people were trapped under all the debris from fallen buildings. Many people died. It was a heartbreaking and desperate time.

We were all so scared, but once I calmed down, I first made all the necessary arrangements to make sure that my family was safe. Then I went to see what had happened at the school where I am the Principal. When I arrived there I noticed that the damage did not seem to be too bad. An electrical post had fallen, and the transformer was hanging off it, broken – it had spilled oil all over the schoolyard. My first reaction was to feel relieved. I thought to myself that, with all the other wreckage and even loss of life in the area, a fallen electrical post was not too serious. I had no idea that the transformer and contaminated soil presented a health risk to the children and teachers at the school.

Shortly before classes were due to re-start, some foreign aid workers who were assisting with disaster recovery in the wake of the earthquake, passed by the school. The moment they saw the fallen transformer they stopped, and we could see they were concerned. They explained that the spilt oil may contain dangerous chemicals and must be cleaned up as a matter of urgency. We were put in touch with the Ministry of Environment (MAE), as, together with the UNDP, they run a GEF-funded project that deals specifically with managing these kinds of chemical wastes.

Within a matter of hours, I received a call from the co-ordinator of this project. They explained to me that the spilled matter was dielectric oil, which may be contaminated with substances called polychlorinated biphenyls (PCBs for short) – harmful pollutants that can cause serious illnesses, even cancer. This was shocking news!

The project officers co-ordinated with the people from the Manabi Electric Company – which is responsible for this kind of equipment – to remove the broken transformer. They performed diagnostic tests at the site to establish if there were in fact PCBs present, and when the test proved positive, they arranged for all the contaminated soil to be removed and replaced with clean soil.

I am forever grateful that we received timely professional advice and practical help through the PCB project to deal with this hazardous oil spill at my school. Children are our future - they need to be kept safe, especially at school where they spend a lot of their day, learning and playing. What worries me is that it took something like an earthquake for us to realize that we had dangerous chemicals right on our doorstep – and I suppose there must be many other places around the city where this is the same. The good thing about this is that the PCB project is now driving an awareness-raising program amongst the community about these substances, and helping the government to put in place a plan of action for improving how dangerous chemicals are managed in our country.”

IVÁN BASURTO was born in Bahia de Caráquez, in Manabi Province on the west coast of Ecuador. He is the Principal of Rodolfo Chávez Rendón School in Las Gilces, (Crucita Province), a position he has held for eight years.

Polychlorinated biphenyls (PCBs) have been widely used in industry due to their characteristics of heat resistance and high stability. Their most widespread use has been as a cooling oil component for electrical equipment, or dielectric oil. PCBs are classed as Persistent Organic Pollutants (POPs) under the Stockholm Convention, to which Ecuador is a signatory, and are harmful to the health of all living beings – the International Agency for Research on Cancer (IARC) has classified PCBs in Group I, the highest level of cancercausing compounds.

In 2014, the Ministry of Environment of Ecuador (MAE), with support from the GEF and UNDP, began implementing a project to achieve integrated and environmentally sound management of PCBs in Ecuador. The objectives of the project are to contribute to policy development and institutional capacity in Ecuador for environmentally sound handling, storage and disposal of chemicals and hazardous wastes, with particular attention paid to the management of PCB stocks in Ecuador’s public electrical system.

The earthquake described by Iván Basurto, (which, at 7.8 on the Richter scale was one of the strongest to hit Ecuador in decades), provided compelling reasons for raising community awareness to the dangers of polychlorinated biphenyls, and improving their management, in the interests of preventing environmental contamination and safeguarding human health. In addition to their planned programme of work, the PCB project played an unexpected but important role in the earthquake recovery process, monitoring disaster sites for chemical contamination, and assisting local agencies and government departments with appropriate management of harmful pollutants.